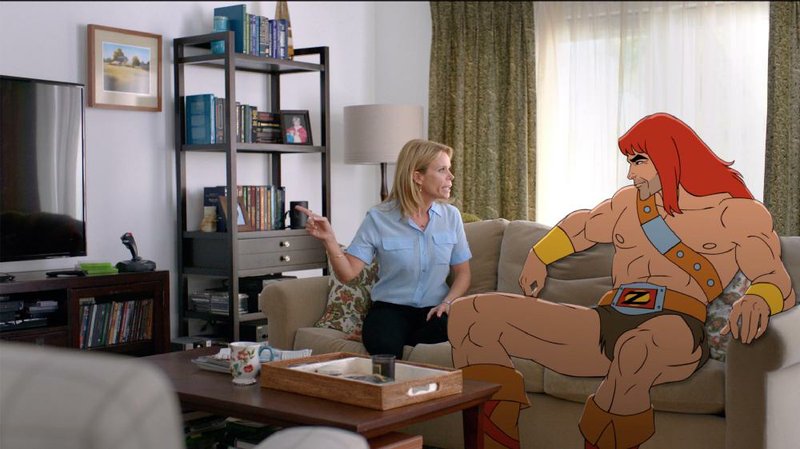 Zorn (voiced by Jason Sudeikis) has a chat with his ex-wife Edie (Cheryl Hines) in the new live/animated comedy Son of Zorn. Catch the sneak peek at 7 p.m. today on Fox.

Fox is holding a sneak preview of its new half-hour comedy Son of Zorn at 7 p.m. today. The live action/animated hybrid (think Who Framed Roger Rabbit?) doesn't officially debut until 7:30 p.m. Sept. 25, but Fox wanted us to sample the show after this afternoon's second football game (Giants at Cowboys) and before the new fall season chaos begins next week.

This personal note from Zorn: "If you like laughing at the horrific brutality of the NFL, you'll love me!"

The series comes from executive producers Phil Lord and Christopher Miller (The LEGO Movie, 21 Jump Street), and features the voice of Jason Sudeikis (Saturday Night Live, Horrible Bosses, We're the Millers) as the voice of Zorn.

Son of Zorn is a tale about an animated warrior who bears a striking resemblance to the titular hero from He-Man and the Masters of the Universe.

Zorn comes from a Pacific island where everything and everyone is animated. He returns to Orange County, Calif., to win back his live-action ex-wife, Edie (played by Cheryl Hines, Curb Your Enthusiasm), and their 17-year-old son, Alangulon.

Alan, as he calls himself, is played by Johnny Pemberton (21 Jump Street). He's a mild-mannered kid and not the warrior Zorn envisions.

To travel back to suburbia and reconnect with his family (he hasn't seen them in 10 years) may be the greatest challenge ever to face Zorn. And that's saying a lot for the Defender of Zephyria, Conqueror of the tribes of Agon and decapitator of the dark herdsmen of Grith.

Zorn's efforts to reconnect with his family get complicated because the former "wild child" Edie is now living the quiet life of a middle class mom and is engaged to Craig (Tim Meadows, Saturday Night Live), a meek online psychology professor and a steady guy.

Zorn: "Remember when we had that fivesome with those mountain trolls?"

Zorn is determined to be a part of Alan's life, however, and commits to remaining for the long haul. He rents a nearby apartment and starts working in the soul-sucking field of industrial soap dispenser sales. He even brings Alan his very own giant death hawk to ride, much to Edie's horror.

Edie: ''If you don't get rid of this thing right now, I'm calling animal control.''

Zorn: ''No, no. This bird would kill animal control.''

Zorn's boss, Linda (Artemis Pebdani, Scandal), appreciates his over-the-top passion for everything, but wants him to dial it back a bit while in the office.

At its core, Son of Zorn is a classic fish-out-of-water tale. Attempting to adjust to suburbia, fatherhood and a painfully boring office cubicle may not be the usual challenge for the "overlord of pain" who has defeated glombeasts, wolf-bats and arachnobots, but there will always be a new set of enemies to face.

Enemies, Fox tells us, "such as meter maids, dress codes and the DMV."

Hines confesses, "He's an idiot, but at the end of the day, Zorn is family, whether Edie wants him to be or not."

Note: Fox comedies -- animated or otherwise -- are always a bit edgy and this is no exception. The series is rated TV-14 and is too mature for younger viewers.

• Welcome, Harry. Harry Connick Jr. has parlayed his outstanding service as a judge on American Idol into his own syndicated talk/variety show. Harry debuts at 2 p.m. Monday on KATV, replacing the canceled (for low ratings) Meredith Vieira Show.

Harry will also air at 11 a.m. on KHBS/KHOG in Northwest Arkansas, and 2 p.m. on KAIT in the Northeast.

The 48-year-old musician, singer, actor and proud New Orleans native, husband and father to three daughters says on the show's website, "We want to take the energy of nighttime and put it right in the middle of the day. The show is all about celebrating the incredible people who make up this country."

In addition to chat, Harry (produced by NBCUniversal) will offer live musical performances, cooking, man-on-the-street interviews, stunts, parodies and audience participation. Connick's band will be with him in the studio.

Vieira is just the latest to stumble and fall. Other promising recent talk shows that bit the dust after one or two seasons include The Jane Pauley Show, The Tony Danza Show, The Wayne Brady Show, Anderson Live and The Queen Latifah Show (twice).