Hutchinson: Medical-marijuana ballot proposals not in best interest of patients 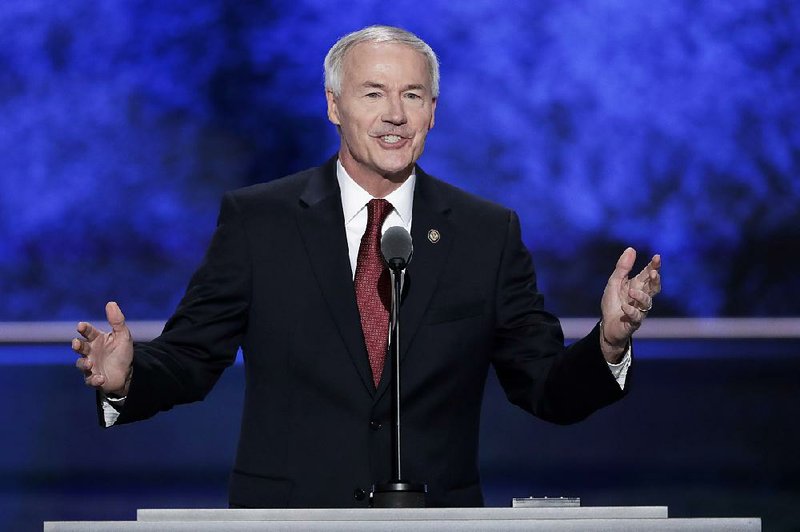 Gov. Asa Hutchinson of Arkansas, speaks during the second day of the Republican National Convention in Cleveland, Tuesday, July 19, 2016.

Gov. Asa Hutchinson on Monday said ballot initiatives seeking to legalize medical marijuana in Arkansas do not lead to good medical practice and are not in the best interest of patients.

The two proposed ballot measures — the Arkansas Medical Marijuana Amendment and Arkansas Medical Cannabis Act — are set to be considered by voters during the Nov. 8 election. An anti-medical marijuana coalition has filed lawsuits against both.

“We all want those who are ill or suffering to have the right kind of medicine, but there is a reason we have an [Food and Drug Administration] approval process for new medicines,” Hutchinson said in a statement. “We don’t vote on cancer cures, and we should not set a new pattern for determining what is good medicine at the ballot box.”

At the state Capitol on Monday, Hutchinson was joined by Arkansas Surgeon General Dr. Greg Bledsoe, Arkansas Department of Health Director Dr. Nate Smith and other members of the medical community, who all denounced the medical marijuana proposals.

“Those who stand with me today are in the medical profession because they care and they want the best for their patients,” Hutchinson said. “If there is new medicine or a new product to alleviate suffering, they want it available.”

Arkansas' governor previously said the legalization of medical marijuana would also be a "tax drain" for the state, referencing enforcement and regulatory issues, The Associated Press reported.

Bledsoe said the initiatives would "open the floodgates for marijuana use in our communities," adding that the proposals would allow the sale of edible marijuana products, including those "with cartoon marketing attractive to children."