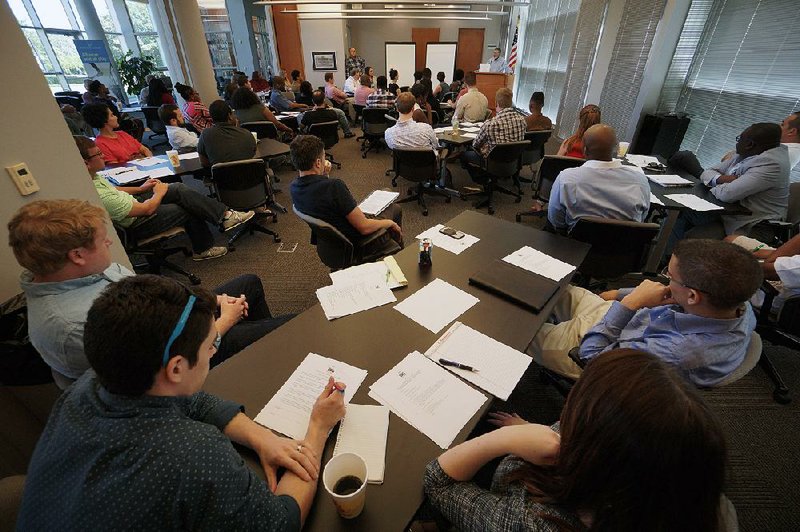 Dean Kumpuris (back right), a member of Fifty for the Future, speaks Sunday during the first session of Think Big Little Rock at the Little Rock Chamber of Commerce. ( Mitchell PE Masilun)

More than gender and race diversify a group of people who embarked on a new yearlong program Sunday that aims to better Little Rock and its surrounding communities.

The following is a list of participants in Think Big Little Rock.

Some of them sported Converse shoes and skinny jeans, T-shirts and backpacks. Others wore business dresses and peep-toe wedges, or a three-piece suit and oxford dress shoes.

The group of 55 come from different backgrounds. Nearly all are in their 20s or 30s.

They make up Think Big Little Rock, a newly created group of people ages 25 to 40 who are charged with studying problems and solutions in eight categories, divided into subcommittees: arts and culture, diversity, education, economic development, health care, public safety and governance, and transportation and environment.

After six months, they'll make a community presentation detailing what problems they hope to find solutions to. Then they'll embark on another six-month mission to not only come up with those solutions, but also create an action plan to carry them out, Dean Kumpuris said.

The goal is to come up with strategies -- and a way to enact them -- to enhance life in the region and make it a more attractive place for young professionals to live and work.

Kumpuris is an at-large representative on the Little Rock Board of Directors and a member of Fifty for the Future, the parent organization of Think Big.

Think Big Little Rock is said to be Kumpuris' "brainchild," but he's making sure to have no influence on it.

"These are the people who need to make the changes in our society,' said Kumpuris, 68. "They are the ones with the most stake -- the ones who are going to be having children, starting careers. They have a bigger stake in how the future turns out."

Creation of a citizens group to study problems is nothing new. In 1992, the Little Rock Board of Directors appointed citizens to Future-Little Rock, a committee with subgroups, to take two years to study a range of issues that would better the city, similar to the categories chosen by Think Big. Many recommendations from that group almost two decades ago still trickle into city government conversations.

But there are differences this time.

For one, city officials will have no part in Think Big Little Rock. And though Fifty for the Future -- a collection of company executives and community leaders focused on economic opportunities -- conceived the idea and is supporting Think Big financially, it won't encumber the process either, Kumpuris said.

And unlike committees that are put together with little backing, this one has an undisclosed amount of funding from Fifty for the Future to do research beyond an Internet query and phone calls. The group has the ability to hire a consultant on a particular issue if it deems necessary.

There's also a chance to focus on what the community can become, as the group is being formed in a time where there is no major crisis plaguing the city that it must respond to immediately, Kumpuris said. Future-Little Rock was created as a response to heightened gang violence in Little Rock in the 1990s.

The University of Arkansas at Little Rock's Institute for Economic Advancement will serve as a neutral facilitator to bring some stability and structure to Think Big's process.

Jim Youngquist, the institute's executive director, and his staff will meet with the group throughout the year, bringing community planning and strategy implementation experience to the effort.

"Y'all are the future. When we say Little Rock, we're not only referring to the geographic-political boarders of Little Rock. This is an economic region. ... You need to think how this region can knock down barriers that exist because of Friday night football," Youngquist told the group Sunday, before the participants formed subcommittees.

There's a chance for the public to get involved, as well. The committee members can bring other young adults into the subgroups. The full group will meet monthly.

The idea is that if this pilot is successful, Fifty for the Future will fund a Think Big Little Rock class every three to five years. That will be important in order to have continuous input from the younger generation on where the future of the city goes, rather than only having those with power such as business owners and political leaders having a say, Kumpuris said.

"This is an opportunity for young people from different backgrounds and races to work together," he said. "It's an opportunity where there's no crisis [to respond to] to have a goal-setting process where they can say how the city should run, not me.

"This is a great opportunity to change this city to take it from a good city to a great city."