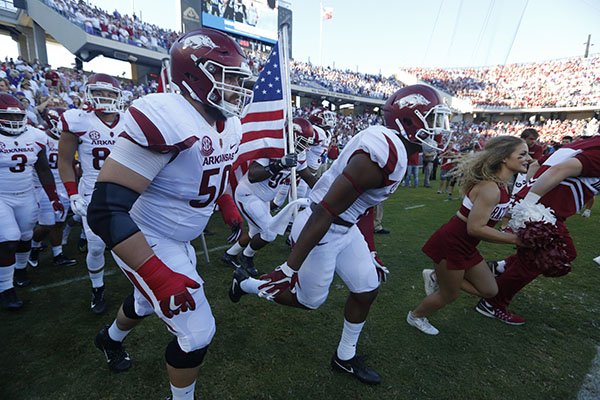 Arkansas players run onto the field prior to a game against TCU on Saturday, Sept. 10, 2016, at Amon G. Carter Stadium in Fort Worth, Texas.

FAYETTEVILLE -- Arkansas was named as the national team of the week Monday by the Football Writers Association of America.

Discuss this story and interact with our staff of reporters at the football insider board.

The Razorbacks (2-0) came from eight points behind in the final two minutes to down No. 15 TCU 41-38 in double overtime on Saturday in Fort Worth

Arkansas snapped TCU's 14-game home winning streak, the third-longest in the country, and wound up ranked No. 24 in both the Associated Press and the USA Today coaches polls released Sunday.

"It took a lot of time to earn respect," Arkansas Coach Bret Bielema said Monday. "I have to give them props for getting themselves in the rankings.

"It took a long time ... but they've got a little bit of respect and now they have to continue to earn it week by week. We'll just keep sawing wood and figure out where we end up."

Members of the FWAA's 12-member All-American committee, along with one fan vote from Twitter, determine the weekly honor.

Arkansas Coach Bret Bielema was named Monday as the Dodd Trophy national coach of the week.

The weekly award, sponsored by the Bobby Dodd Coach of the Year Foundation and the Chick-fil-A Peach Bowl, is given to a coach whose program embodies the award's three pillars of scholarship, leadership and integrity while also having on-the-field success.

"Coach Bret Bielema is a perfect example of achieving success both on and off the field," said Jim Terry, Chairman of the Bobby Dodd Coach of the Year Foundation. "Coming off a fantastic road win early in the season against a ranked opponent, we wish Coach Bielema and Arkansas continued success on the field and in the classroom this season."

The senior from Arvada, Colo., graded at 90 percent against TCU with his line play, and he blocked a field goal with 10 seconds left in regulation that would have given the Horned Frogs a 31-28 lead.

For the second consecutive week, Arkansas ran a successful play from the menu of offensive coordinator Dan Enos' two-point conversions.

With 1:03 to play against TCU, quarterback Austin Allen gave the ball on a jet sweep to receiver Drew Morgan, who then tossed it to Keon Hatcher, who lofted a left-handed two-point conversion pass to Allen near the left boundary.

"He comes up with these words," Bielema said. "We're building our GPA on and off the field."

Allen, speaking on the SEC Network, said the play's name changed to "Annexation Frogs" last week when it was not used against Louisiana Tech in the opener. The play was "Annexation of the Boot" last week, Allen said.

On Saturday's conversion, Enos said Hatcher had a run-pass option.

"We coach it as run first, throw second," he said. "Because my experience with plays like that is if you think you're going to throw, you slow down, then if you try to speed up late to run it in, usually you don't get in."

Enos said the Razorbacks have the versatility to run the same play to the right with a right-handed passer and that having Morgan involved creates a strong mis-direction move.

"We wanted everybody in the stadium to think we were going to hand Drew the ball going across the field in motion, because he is such a key component to our offense," he said.

TCU Coach Gary Patterson said Monday on the Big 12 coaches teleconference that the gesture for which Kenny Hill was penalized 15 yards after scoring a touchdown late in the fourth quarter was a religious gesture, not a throat slash.

"If he wants to do something like that, he just needs to let me know," Patterson said on the call. "That way I can do a better job of backing him up. We've learned a lesson."

A TCU spokesman told the Fort Worth Star-Telegram that the move, in which Hill slashed with his right hand from his left shoulder, near his throat, and across his chest, was sign language for "rising kings."

The Razorbacks will be trying to break a four-game losing streak against the Aggies in the late game at AT&T Stadium in Arlington, Texas.

TCU fans booed Arkansas linebacker Brooks Ellis late in regulation when he went down with cramps in both legs.

The fans apparently thought Ellis was faking an injury to give his unit a breather against TCU's hurry-up offense. However, Ellis was given a pair of IVs in the locker room to re-hydrate.

It wasn't so long ago fans often cheered an opposing player when he left the field due to physical issues.

"I thought it was very sick moment," Bret Bielema said. "Brooks Ellis is a 3.9 student. There isn't a dishonest bone in his body. He was cramping up because he was playing his tail off and he got booed off the field. When we talk about player safety, that's a big deal to me ..., [the booing] is a sad commentary."

Bret Bielema said he intentionally fed false information about his plan for kickoffs early last week in an effort to blunt TCU's dangerous KaVontae Turpin, who wound up with 295 all-purpose yards, including a 64-yard return on the Hogs' final kickoff.

Bielema said early in the week he would continue to use right-footed Adam McFain on kickoffs and kick deep to the left. Left-footed Connor Limpert hit all six kickoffs for the Hogs against TCU.

"If I would have said ... we were going to kick Connor Limpert, it wouldn't have been as big a surprise," Bielema said. "So I will occasionally give you bad information ... if I feel it can be advantageous for us on game day.

"We never put one deep left the whole day. But when your opponent reads that and sees that and that's what we've been all year ... there's a reason when we kicked off that first ball that 25 [Turpin] was deep to our left, because that's where they thought the ball was going."

As it turned out, Turpin returned four kicks for 136 yards, a 34-yard average. Turpin averaged 25.3 yards on three of the returns, 64 yards on the fourth.

Arkansas will pay Texas State a $1 million game guarantee for Saturday's game, the San Marcos (Texas) Daily Record has reported. It is the second $1 million payday for a nonconference opponent against the Razorbacks, following Toledo's guarantee last year. Arkansas paid Louisiana Tech a $925,000 guarantee for the season opener.

Texas State (1-0), under first-year Coach Everett Withers, broke the school passing record with 440 yards in its 56-54 triple overtime victory at Ohio to open the season. The Bobcats had an open date last week.

• Arkansas improved to 12-6 in overtime games with its victory at TCU, matching Tennessee (12-6) for the most overtime victories by an SEC team.

• The Razorbacks lead the SEC and rank third in the country in average time of possession (34:23).

• Arkansas shut out TCU in the first half, marking the first time the Horned Frogs had been held scoreless in an opening half in a regular season game since a 2013 game at Oklahoma State.

• The Razorbacks are tied for 20th in the nation with 40 penalty yards per game.