Bielema: Misspelled jersey 'brings some humor into the world' 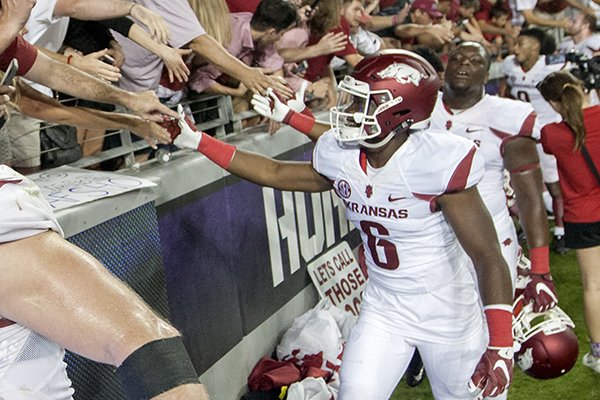 Freshman running back TJ Hammonds wore a jersey that had Arkansas misspelled as "Akransas." TV cameras caught the mistake and Internet blogs poked fun at the mistake.

“I didn’t know about it until the next day,” Bielema said. “Obviously it went undetected. We actually get those jerseys, and I know they always check the name on the back and the spelling, but no one had really thought about checking the spelling on the front of the jersey."

Bielema indicated he'll install a protocol for inspections on the front of the jersey moving forward.

“Well 70 guys travel, and 69 of them were right, but obviously we had a dyslexia speller or something on that one jersey," Bielema said.

“We had some fun with it .. .but it also brings some humor into the world, which we all need.”

Any press is good press! #Akransas. Could this catch on at other schools? Notre Damn? Texas S&M? pic.twitter.com/xVKuobmgx5