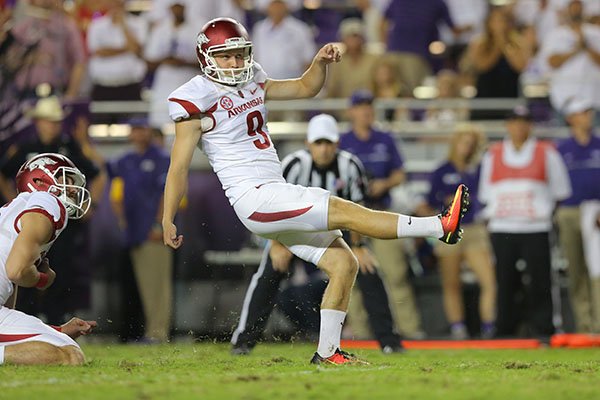 Arkansas kicker Cole Hedlund misses a field goal during a game against TCU on Saturday, Sept. 10, 2016, in Fort Worth, Texas.

FAYETTEVILLE -- Arkansas Coach Bret Bielema indicated Monday he would stick with sophomore Cole Hedlund as the team's No. 1 kicker.

Hedlund made his first two field goal tries of the season, from 38 and 27 yards, in the first half at TCU, but he clanged a 22-yard try off the right upright early in the fourth quarter that set the stage for the Horned Frogs' comeback from a 20-7 deficit.

Bielema said the coaches had discussed taking a delay of game penalty if Arkansas was tying a field goal from the 3-yard line or closer. Hedlund's miss came from a snap at the 4-yard line on the left hash.

"From this point forward, we'll make a decision based on game-day action," he said. "But he had stroked the ball very, very well, and he had been really, really good. Obviously he missed the one, but that was more the angle than anything."

The weather forecast calls for a 60 percent chance of scattered thunderstorms by game time Saturday with light wind and humidity in the upper 70s.

Arkansas has been involved in several rain games the past couple of years, including the regular-season finale against Missouri last year on the day after Thanksgiving.

Arkansas announced Thursday that its home games against Texas State on Saturday and against Alabama on Oct. 8 are sellouts.

The Razorbacks (2-0) take on Texas State (1-0) at 6:30 p.m. on Saturday at Reynolds Razorback Stadium. Game time against No. 1 Alabama has not been determined.

UA officials announced fewer than 2,000 tickets remain for the Ole Miss game on Oct. 15, about 1,000 tickets are still available for the Florida game on Nov. 5 and fewer than 300 tickets remain for the LSU game on Nov. 12. Tickets are also available for the game against Alcorn State at War Memorial Stadium in Little Rock on Oct. 1. Call 1-800-982-HOGS (4647) for more ticket information.

Texas State is a 31-point underdog at Arkansas, but Texas State Coach Everett Withers doesn't want to hear it.

"I don't really know what that term means, to be honest with you," Withers said. "I don't know what underdog means. People use that term all the time. ... Explain it to me.

"I don't use the term underdog. I've never been associated with the word underdog very much."

Arkansas tight end Jeremy Sprinkle caught a critical 25-yard pass during a touchdown drive in the third quarter. The long pass was on second and 23.

"I would say it's up there, just because it was a big play for us to get that first down after a penalty that set us back," Sprinkle said when asked to rate the catch among his favorites.

Sprinkle caught an equally important pass on third and 4 in the first overtime. Quarterback Austin Allen threw a high ball for Sprinkle inside the 5-yard line with Nick Orr in coverage. Sprinkle rose up, made the catch and ran the last couple of strides for a 19-yard touchdown.

"He's a big body in the red zone, and you just kind of throw it high. He's one of the most athletic guys on the team, so you know he'll come down with it," Allen said.

"I ran my route, stemmed him, turned around and the ball was there, and I just had to go get it," Sprinkle said. "It was a good-placed ball by Austin."

"Their tackles are very athletic and, looking at their first game, I don't think anybody beat them on speed rush," Segrest said, referencing 6-5, 329-pound left tackle Ryan Melton and 6-6, 290-pound right tackle Tryston Mizerak. "Those guys are quick-footed. Their right guard [6-4, 303-pound Felix Romero] is one of the most powerful guys we're probably going to play against this year. I haven't seen him bull-rushed yet. Just a guy that's a great anchor, so we're going to have our work cut out."

Bielema's overall record in his 11th season is now back up to 88-44, a .667 winning percentage that ranks 24th among coaches at Power Five schools who have at least five years of experience.

Bielema and Texas State Coach Everett Withers (26-13 in his fourth season as a head coach) have the same winning percentage.

TCU was the second of nine opponents Arkansas will face that played in a bowl game last season. The only teams on Arkansas' schedule who did not play in bowl games last season are Texas State (3-9), Alcorn State (FCS) and Missouri (5-7).

Texas State played 10 true freshmen and 23 players who were seeing their first college action in its 56-54 triple-overtime victory at Ohio in the season opener.

"We're still kind of in training camp mode with this team," Coach Everett Withers said. "The bye week last week was a lot about fundamentals and a lot about technique and getting better individually and as a team."

Arkansas' odds for winning the College Football Playoff championship have been yo-yoing since the preseason.

The Razorbacks opened the season as a 100-to-1 shot to capture the championship, according to the oddsmaker Bovada of Las Vegas. The Hogs dropped to a 200-to-1 shot after edging past Louisiana Tech 21-20 in the opener.

ESPN analysts Mark Schlabach and Brett McMurphy are split on projecting Arkansas' bowl destination after its 2-0 start. Schlabach projects the Hogs to the Texas Bowl against Oklahoma State, while McMurphy picks the Belk Bowl vs. Miami.

CBSSports is also predicting a Belk Bowl appearance for Arkansas, against Virginia Tech, while Saturdays Down South opted for a rematch with TCU in the Texas Bowl.