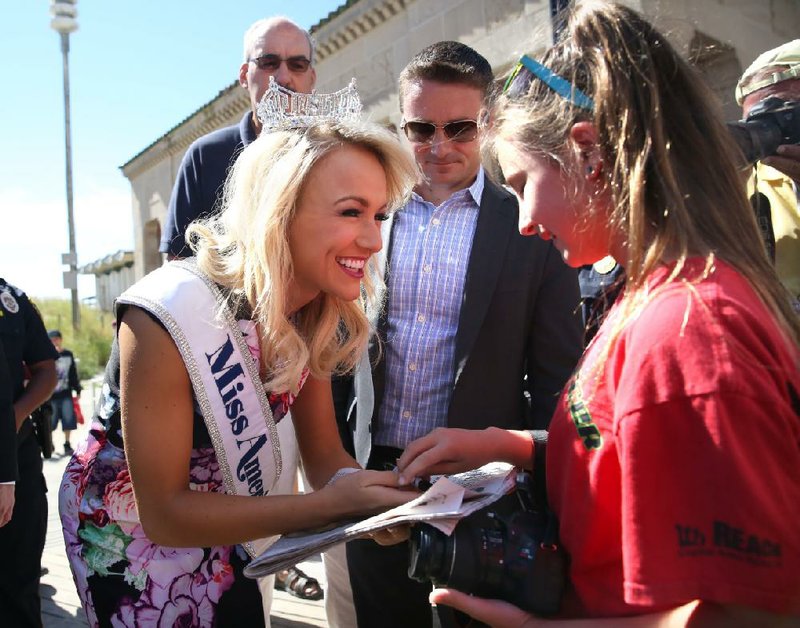 A BEAUT OF A GIFT: When Little Rock resident Reagan Dennie turned 11 Monday during an East Coast road trip vacation with her family, an unexpected gift arrived -- a chance meeting with a fellow Arkansan, newly crowned Miss America Savvy Shields.

Robby and Tara Dennie, who home-school their six children, were on a family trip along the East Coast and in Philadelphia when, hearing that Miss Arkansas had won the title, decided it might be fun to take a side trip to Boardwalk Hall in New Jersey and see the statue of Miss America.

Arriving late Monday morning to find a cluster of reporters, they hung around to see what was about to happen.

"About two minutes later, Miss America came out and took some photos," says Robby Dennie. "We followed when she ... did the toe dip in the Atlantic Ocean and afterward, someone in the crowd gave Reagan a copy of the local paper and suggested she ask Miss America to autograph it."

While signing, Shields asked Reagan her name and the girl responded, adding that she was also from Arkansas.

"You're getting my first autograph as Miss America," Shields told her. "I'm even still learning how to sign it."

SISTER ACT: A recent issue of The New Yorker noted a new play about an Arkansan in previews at the Atlantic Theatre Company in New York. Marie and Rosetta revolves around an early gospel recording star, Cotton Plant native Sister Rosetta Tharpe.

YEAH, YEAH, YEAH! George Harrison's sister Louise, 85, of Branson, where she co-founded and manages the Beatles tribute band Liverpool Legends, is set to visit Little Rock on Oct. 14 in conjunction with the Clinton Presidential Center's temporary exhibit, "Ladies and Gentlemen ... The Beatles!" The exhibit, running Oct. 8-April 7, 2017, and curated by the Grammy Museum and Fab Four Exhibits, will feature 400-plus pieces of rare memorabilia.

Harrison tells Paper Trails she'd also like to speak on the campaign trail on behalf of Hillary Clinton.

"I'd like to encourage my family of fellow Beatle people to get out and vote and stay on the side of love and peace."

TUNING IN: The Hot Springs-produced unscripted reality TV series, Mineral Explorers, returns, both statewide and nationally, for a second season. The show features veteran mineral dealer Thomas Nagin, owner of Crystal Springs Mining Co. and Gallery traveling to some of the world's most remote mines. It will air statewide on AETN on Wednesdays, starting at 10:30 p.m. Sept. 21. Visit mineralexplorers.com for more info.