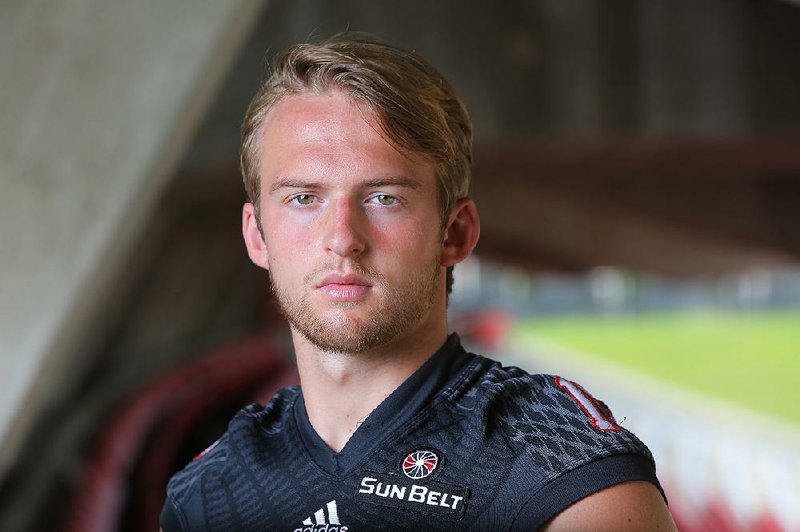 Justice Hansen helped lead Arkansas State to its most productive half of the season Friday night.

It didn’t lead to a red Wolves victory, but it will earn him his first career start.

Coach Blake Anderson said Monday that Hansen, a sophomore who came off the bench to pass for 277 yards and 1 touchdown in Friday’s loss to Utah State, will start Saturday’s game against Central Arkansas.

Hansen lost a battle with graduate transfer Chad Voytik for the starting spot i August, but led ASU to a season-high in points and total yards while playing three quarters.

Anderson said the decision was compounded by what he and offensive coordinator Buster Faulkner saw the week before, when Hansen played late in a loss to Auburn.

“What we were able to find out in the fourth quarter against Auburn was that Justice was going to stay calm under pressure and that he’s starting to really get a grasp of what we were doing,” Anderson said. “And you found out in the second half [Friday] that he’s just further along than Chad.”

Hansen led two touchdown drive sin the third quarter, while helping ASU gain 199 yards. The Red Wolves got within 27-20 before the 34-20 loss.

Voytik, Anderson said, will be the No. 2 and still could be used as a runner in the offense. Voytik arrived at ASU in June after spending the last four seasons at Pittsburgh and was immediately thrown into a competition for the starting job.

“That’s a lot to ask of Chad Voytik, with no spring football to come in and learn what we’re doing at the tempo that we do it,” Anderson said. “The environment that we put him in the last three weeks in a row, to expect him to be immediately successful — that’s what we expected, but that’s a lot to ask.”

Faulkner said experience was ASU’s concern with Hansen during fall camp. He redshirted in 2014 at Oklahoma before starting last year at Butler County Community College. He played one series in the season-opening loss to Toledo before playing the fourth quarter in a blowout loss at Auburn.

Friday night was the first chance allowed for Hansen to run the offense in a game that was still in doubt.

“He’s got some poise,” Faulkner said. “He was able to stand in the pocket; he didn’t get rattled. The situation won’t be too big for him. I think that was the biggest thing.”

• Blake Anderson said a lot of Sunday’s meetings revolved around penalties. ASU committed 18 penalties in Friday’s loss, the most for an ASU team under Anderson. Eight of those were false start penalties that Anderson said were created by Utah State shifting and making false snap counts. Anderson said 17 uncalled penalties were turned into the Mountain West Conference for review.

“They’re nothing crazy, just places flags should have been thrown,” Anderson said. “Don’t know why they weren’t, but that’s their league’s job is to figure it out. It won’t change the game or the outcome.”

• ASU was 1-3 in the non conference last season, a record it will duplicate if it beats Central Arkansas on Saturday. But Anderson said UCA will provide a tougher challenge than Missouri State did last year, which ASU beat 70-7 for its only non-league victory.

“I wish they were terrible; they’re not,” he said. “We’d love to play the worst team on the planet this week and find a way to get a ‘W’ and some confidence. But they’re not. They’re a big challenge.”

Swalley had four tackles, including one for a loss in Friday’s loss.

“Swalley’s earned that spot,” Cauthen said. “He probably played his best game since he’s been here. I was real impressed with what he did.”

• Cornerback Chris Humes left Friday's game with a shoulder injury but practiced Sunday and Anderson said he should return to play Central Arkansas on Saturday. Defensive tackle Robert Mondie (ankle) should be available, too. Defensive end Griffin Riggs (groin) and wide receiver Christian Booker (knee) will be limited in practice.