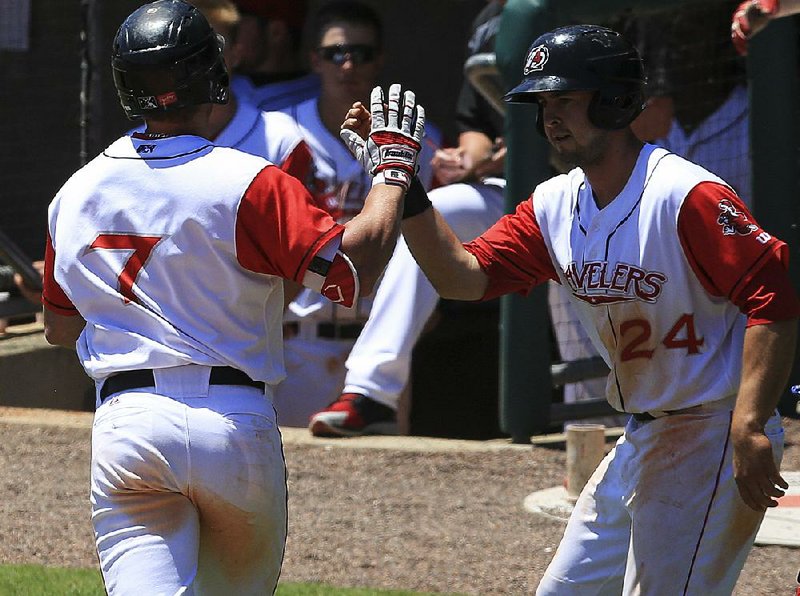 Eric Aguilera (right) of the Arkansas Travelers congratulates teammate Cal Towey after Towey’s home run during the sixth inning of the Travelers’ 7-6, 12-inning victory over the Tulsa Drillers on Wednesday afternoon in North Little Rock. Aguilera would later add a home run in the ninth.

For just the second time in 50 years, the Arkansas Travelers are changing their Major League Baseball affiliate.

The Travs and the Seattle Mariners have signed a two-year player development contract, ending a 16-year relationship between one of Minor League Baseball's oldest teams and the Los Angeles Angels, Travs' president Russ Meeks said Tuesday.

The Class AA Travs and the Angels began an affiliation in 2001 and went through eight two-year development deals. That agreement followed a 35-year relationship with the St. Louis Cardinals, which began in 1966. The Travs were also a Philadelphia Phillies Class AAA affiliate in 1963-1965.

Meeks said the move was made after a unanimous decision by the Travs executive committee and that the paperwork was turned in to Minor League Baseball on Tuesday morning.

"We're excited about the opportunity," Meeks told the Democrat-Gazette on Tuesday. "Everybody thought this was a great opportunity for us, and therefore we've got everybody hitting on all cylinders moving into a new relationship."

Meeks said the "Angels have been a great affiliation for us," and the new agreement reconnects the Travs with a former member of its front office.

Mariners General Manager Jerry Dipoto held that post for the Angels in 2011-2015, a previous relationship that played a factor, Meeks said.

"The Mariners look forward to working closely with our new partner," Dipoto said in a news release. "It is a franchise with great fans, a great staff and a great ballpark, as well as a long and storied history in professional baseball, dating back to 1901. Both organizations are committed to the community, good baseball and an entertaining ballpark experience."

The Mariners had been affiliated with the Jackson Generals of the Southern League, but that team said Monday that it was signing with the Arizona Diamondbacks. The Angels have not yet announced a new Class AA affiliate, but teams in Midland, Texas, and Mobile, Ala., still have not yet signed new contracts with major league teams.