At Initiative meeting, she singles out Wal-Mart, McLartys for recognition by Frank E. Lockwood | September 21, 2016 at 5:45 a.m. 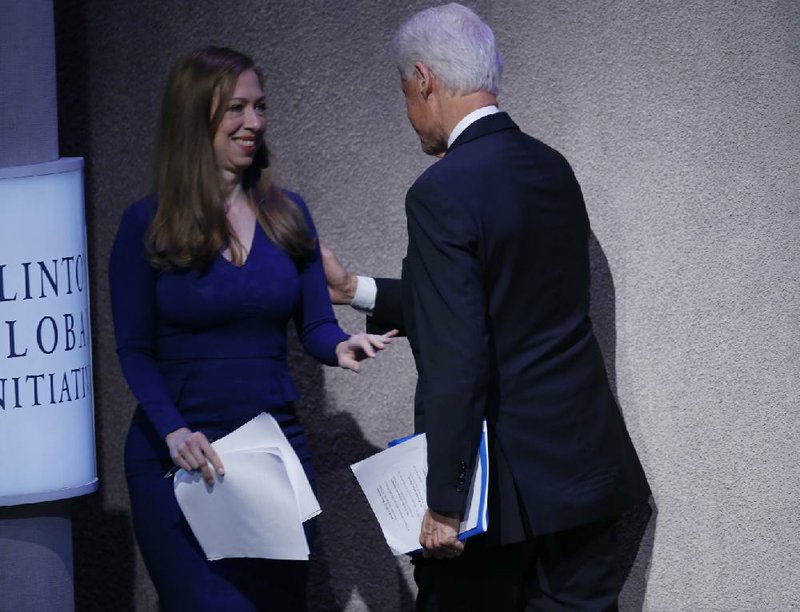 Chelsea Clinton, vice chairman of the Clinton Foundation, enters the stage at the Clinton Global Initiative as her father, former U.S. President Bill Clinton, leaves the stage after speaking Monday in New York.

NEW YORK -- As the Clinton Global Initiative winds down, organizers are announcing the latest charitable commitments that its partners have made.

At the group's 12th and final annual meeting, Vice Chairman Chelsea Clinton on Tuesday highlighted new, expanded and ongoing projects aimed at improving life for girls and women. She invited representatives of more than two dozen groups to stand onstage with her.

Wal-Mart Stores Inc. was singled out for partnering with other organizations to increase opportunities for women-owned businesses. The Bentonville retailer is one of several businesses joining with a group called WEConnect International with the goal of spending $15 billion with businesses owned by women over the next five years.

Since former President Bill Clinton launched the Global Initiative as an arm of the Clinton Foundation in 2005, its members have made more than 3,600 commitments to solving a variety of problems around the globe, the organization states. Its partners have pledged to raise $125 billion to meet them, according to a Bloomberg News calculation based on annual reports.

During Tuesday's announcement, Chelsea Clinton stressed the importance of the latest efforts, telling the crowd that "achieving gender equality doesn't only change the lives and the opportunities for girls and women, it changes the world. That's good for men and boys, too."

"When girls and women participate fully, economies grow; societies, nations and our global community are all more secure," she said.

In a written statement, a Wal-Mart spokesman said the company is committed to working with women-owned businesses.

"For Walmart, empowering women isn't just the right thing to do, it's smart business -- helping us better understand and serve our customers, find the best talent, and promote economic growth in our communities," she said.

"Walmart believes empowering women economically will make us a more successful retailer. The majority of our 260 million weekly customers are women, and women control $20 trillion of annual consumer spending globally."

In addition to the Wal-Mart representative, Little Rock native Franklin McLarty also was invited onstage. His father is Thomas F. "Mack" McLarty, a former chief of staff for President Clinton.

Franklin McLarty's family has agreed to provide funding for two semester-long positions at Vital Voices, a Washington-based nonprofit that helps train and mentor "emerging women leaders from over 144 countries," its website states.

The McLarty Global Fellows Program had announced a five-year partnership with Vital Voices in 2014.

Several members of the McLarty family helped launch the global fellows program in 2002, but Franklin McLarty, the chief executive officer of RML Automotive, gave his mother, Donna McLarty, much of the credit for the program that provides opportunities to students.

"Mom had the vision, put a lot of work into creating it, and it's touched over 50 college students now," Franklin McLarty said.

Vital Voices is "a women's rights and equality organization that does really amazingly, important and redeeming work on women's rights throughout the world, so for them to have an opportunity to make some of their McLarty Global Fellows efforts tied to [Vital Voices] was a natural," he said.

Among the other commitments announced by the Global Initiative on Tuesday were:

• $3 million a year for two years from the Global Fund for Women to "raise the visibility of women-led organizations removing barriers to gender equality globally."

• $1 million in grants from the United Nations Trust Fund to End Violence Against Women for "grants targeting projects and supporting civil society organizations that empower refugee women and girls in an effort to address the issue of sexual and gender based violence experienced by refugee women and girls."

• $5 million from Phoenix-based copper miner Freeport-McMoRan "to promote women's economic empowerment and address violence against women in four countries by 2021."

This will be the Global Initiative's last annual meeting, the organization has announced. Democratic presidential nominee Hillary Clinton, a former secretary of state, isn't attending this year's gathering.

In an interview with CNBC, Bill Clinton said it would be "impossible" for him to continue his work with the foundation, which oversees the Global Initiative, if his wife is elected president.

He noted the scrutiny the organization and its contributors have received during the 2016 campaign, and he suggested that fundraising and partnership-building would be problematic if his family returns to the White House.

"The economics of it won't work unless there are corporate sponsorships and unless we can have people from all over the world here," he noted.

Republican presidential nominee Donald Trump has criticized the Clintons for their ties to the Clinton Foundation and the Clinton Global Initiative, saying the former secretary of state provided favors and special access to foundation donors.

This week, the former president denied profiting from the foundation, saying his family hasn't accepted any money from it and has, in fact, donated millions to it.

Bill Clinton told CNBC on Tuesday that the initiative has done important work, adding: "I think we've already changed philanthropy. That is, I think more and more people now think that instead of just giving money, they should make a commitment to specifically do something."