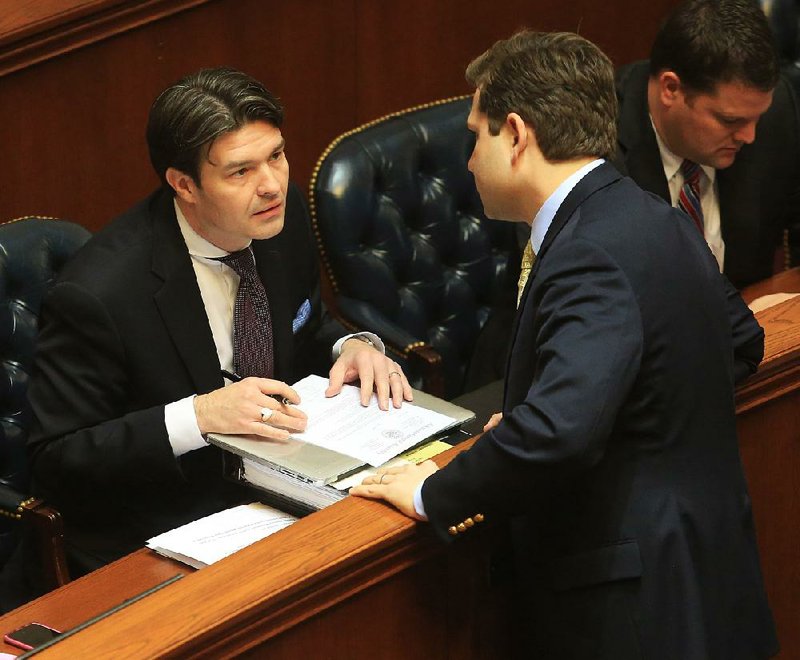 A legislative committee Tuesday approved putting a limit on a mental health benefit for Medicaid recipients, despite objections from providers who said it would disrupt patient care and force treatment facilities to close. 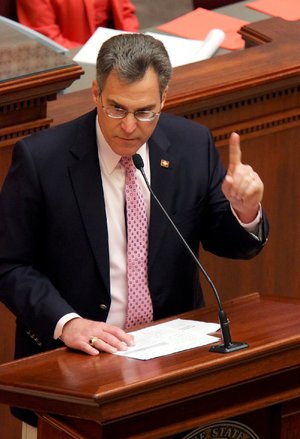 Photo by Stephen B. Thornton
Rep. Charlie Collins, R-Fayetteville, is shown in this file photo.

Under the change approved by the Legislative Council's Administrative Rules and Regulations Subcommittee, Medicaid reimbursement for group psychotherapy would be limited to one hour a day, instead of an hour and a half a day.

The change would also limit the total number of hourlong sessions to 25 per year per person. Currently, the Medicaid program doesn't limit the number of sessions a patient can receive.

Medicaid Inspector General Elizabeth Smith proposed the change after AdvanceMed, a company with a federal contract to monitor Medicaid and Medicare spending in Arkansas and six other states, found that health care providers in Arkansas billed for group therapy services more often than did their counterparts in the other states.

From 2013-15, for instance, the state Medicaid program spent $147 million on group psychotherapy, more than the amount spent by the Medicaid programs in Alabama, Georgia, Louisiana, Mississippi, Tennessee and West Virginia combined.

Alabama, which had the highest total next to Arkansas, spent $8.3 million on group psychotherapy.

When comparing Arkansas with Alabama, Georgia, Louisiana and Mississippi, AdvanceMed found that Arkansas was the only state with no annual limit on group psychotherapy sessions. Tennessee and West Virginia were not included in that comparison because information on annual limits in those states was not available.

AdvanceMed also found that Arkansas' reimbursement rate, $55.20 per hour, was higher than in the other states, where the rate ranged from $28.92 per hour in Georgia to $22.05 per hour in Louisiana.

Each session in Arkansas can include up to 10 children or 12 adults, meaning a provider can earn up to $993.60 per session.

If Arkansas had previously capped the therapy sessions at one hour, it would have saved $31.5 million in state and federal Medicaid spending from 2013-15, AdvanceMed found.

Limiting the therapy sessions to 25 per year, even without capping the session length, would have saved the state $70 million over the same period, the company found.

Smith said she's concerned that some of the money in Arkansas is being improperly billed and that the federal government, which provides 70 percent of the funding, could seek reimbursement from the state.

"Arkansas is vulnerable for what we are doing with this billing code," Smith said. "Not only are we vulnerable, we are spending money we don't need to be spending."

Robin Raveendran, director of the Alliance for Health Improvement, which represents mental health care providers, said other states may be reimbursing providers for the same services, but under different billing codes.

Smith said Beacon Health Options, a company that reviews coverage requests for the state Medicaid program, would be able to authorize additional therapy sessions after a provider reaches the 25-session cap if the additional sessions were medically necessary.

She said Beacon Health Options already reviews treatment plans for those receiving group therapy and must approve the treatment every three months.

Bonnie White, executive director of Jonesboro-based Mid-South Health Systems, said the cap would create enough uncertainty that her organization would have to close the three 16-bed "lockdown" facilities it operates for people who have been acquitted of crimes because of mental illness.

Residents at the facilities attend group therapy sessions six days a week. The reimbursement for such sessions provides 30 percent to 40 percent of the organization's overall revenue and an even higher percentage of the revenue of the lockdown facilities, she said.

She said her organization opened the facilities several years ago at the request of the state Department of Human Services because of a lack of space at the Arkansas State Hospital.

That came after U.S. District Judge Stephen Reasoner ruled in a federal lawsuit in 2̶0̶1̶2̶ 2002* that delays in admission to the State Hospital violated inmates' constitutional rights to due process, causing suffering that amounted to "punishment." In a settlement to the case, Arkansas pledged to provide speedier treatment.

"We were not offered any other reimbursement plan except what was available to us, so [the Human Services Department officials] were fully aware of the payment plan that we had available to us," White said.

Arkansas' Medicaid program does not give providers the option to be paid a daily rate for the type of care Mid-South Health Systems' facilities provide, White said.

She and other providers asked that the benefit limit be delayed until July 1, when they said the Human Services Department plans to begin providing a daily reimbursement rate for such facilities as part of an overhaul of its behavioral health reimbursement rules.

But Rep. Charlie Collins, R-Fayetteville, the chairman of a task force that is forming recommendations for changes to the Medicaid program, urged fellow lawmakers not to delay the benefit limit.

"The history that we have in terms of health care reform in Arkansas is lots and lots of talk, not a lot of action," Collins said.

With no members objecting, Sen. David Sanders, R-Little Rock, and chairman of the committee, deemed the rule change reviewed and approved.

The proposal went to the subcommittee after the House and Senate public health committees signaled their disapproval by declining to "review" the rule change last week.

The proposal will go Friday to the Legislative Council for final approval consideration.

*CORRECTION: U.S. District Judge Stephen Reasoner ruled in a federal lawsuit in 2002 that delays in admission to the Arkansas State Hospital violated jail inmates’ constitutional rights to due process, causing suffering that amounted to “punishment.” This article incorrectly stated when the ruling was made.