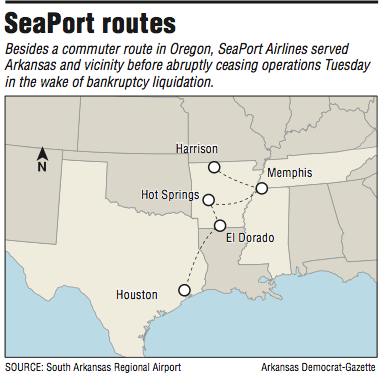 The Oregon-based airline had been going through Chapter 11 bankruptcy reorganization since February but abruptly shifted to Chapter 7 liquidation on Tuesday.

Tim Sieber, SeaPort's president, said in a statement on the company's website, seaportair.com, that a successful financial reorganization appeared to be possible but that "we were forced to make the difficult decision to cease operations."

The move came after a meeting Tuesday in Portland, Ore., with federal bankruptcy Judge Randall L. Dunn. The conversion to Chapter 7 became effective Wednesday, according to a court filing.

The airline instructed passengers to contact their credit card companies for ticket refunds.

"It was like a sucker punch yesterday," Judy McCutcheon, manager of the Boone County Regional Airport in Harrison, said Wednesday.

At a meeting Tuesday, McCutcheon told her airport board that SeaPort was doing well and hadn't canceled a flight in 78 days.

"Then four hours later, I get that phone call," she said. "So I sounded like a big dummy after the board meeting."

McCutcheon said SeaPort started having problems last year, with larger airlines hiring away pilots and other personnel. That caused flight delays and cancellations in Harrison, she said.

SeaPort dropped its flight from Harrison to Kansas City, Mo., when it filed for Chapter 11 bankruptcy, said McCutcheon. That left the Harrison airport with only one commercial destination -- Memphis. On weekdays, Harrison had three round-trip flights to Memphis.

Harrison is home to FedEx Freight, a subsidiary of FedEx Corp., which is based in Memphis. So it's important to have flights between those cities, said McCutcheon.

McCutcheon said SeaPort's service in Harrison had improved in recent months, but shoddy service by SeaPort in 2015 had soured some FedEx Freight employees, who decided they'd rather rent a car and spend five hours driving to Memphis instead of taking a one-hour flight that might be canceled or delayed.

A lot of those customers never go back to the airport, said McCutcheon.

"FedEx was burned very badly," she said. "They just got in the habit of not using our air service. It really took a nosedive. They were missing meetings and got very angry and agitated and never came back."

The number of outbound passengers at the Harrison airport dropped from about 500 a month in early 2015 to 127 last month, said McCutcheon. She estimated that 85 percent of the 127 passengers work for FedEx Freight. McCutcheon said two FedEx Freight employees were stranded in Memphis on Wednesday.

"Their car is here," said McCutcheon, referring to the Harrison airport. "They're probably not in a very good mood right now."

A call to FedEx Freight was routed to the corporate headquarters in Memphis. Nobody returned the call by late Wednesday afternoon.

McCutcheon said FedEx Freight has a corporate jet, but it won't be able to land at the Harrison airport for a month or two, beginning Oct. 3, while work is being done on the 6,160-foot runway and part of the taxiway is serving as a temporary runway.

McCutcheon said it will take at least two months to get another airline serving the Harrison airport. When Mesa Airlines went out of business in 2008, it took 18 months to find a replacement, she said. Mesa also served El Dorado and Hot Springs.

SeaPort's departure will have a ripple effect in the economy, said McCutcheon. She said the airline bought 5,500 gallons of fuel a month from the airport's fixed-base operator.

McCutcheon said the nearest commercial airport to Harrison is in Hollister, Mo., 35 miles to the north.

"We knew they were in Chapter 11 since February, but what happened [Tuesday] was certainly a surprise," he said.

SeaPort had two daily round-trip flights from Memphis to Houston on weekdays. Hot Springs and El Dorado were stops along each of those routes. So El Dorado had direct flights to Houston and Hot Springs, and a flight to Memphis that stopped in Hot Springs on the way.

Besides the flights in Arkansas and to Memphis and Houston, the only other route being operated by SeaPort was between Portland, Ore., and Pendleton, Ore., and that one was scheduled to end Dec. 31.

Johnson said the El Dorado airport has 280 to 325 outbound passengers per month.

He said four people showed up at the El Dorado airport on Wednesday for a flight and were told SeaPort was out of business. The company had apparently notified most passengers, said Johnson.

Johnson said he had been happy with SeaPort.

"We were pleased with their service," said Johnson. "Their track record in recent months had been trending very well with their on-time performance."

Johnson said the closest commercial airport to El Dorado is in Monroe, La., about 75 miles to the southeast.

Glen Barentine, director of the airport at Hot Springs Memorial Field, said he got an email at 4:50 p.m. Tuesday saying SeaPort was shutting down.

"It was completely out of the blue," he said. "I had to read it two or three times. They were planning to come visit out here and talk about how good they're doing. We got an email a couple of months ago about how positive everything was going."

On Wednesday, the U.S. Department of Transportation issued an emergency request for proposals for a new airline to serve the three Arkansas cities. Proposals must be submitted by Oct. 12. In the request, the department asks for proposals to provide three round-trip flights per weekday (18 flights per week) to a large or medium hub on aircraft that seat nine passengers.

The federal government subsidizes the service through its Essential Air Service program, which is intended to ensure that small communities have commercial air service. According to the proposal, SeaPort's contract specified $5,865,372 in annual federal subsidies to serve the three Arkansas cities.