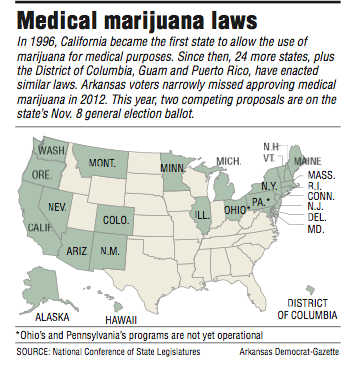 The words used to summarize a medical marijuana proposal on ballots received unanimous approval from the Arkansas Supreme Court on Thursday, but the proposed initiated act still faces a second challenge before the state's highest court. 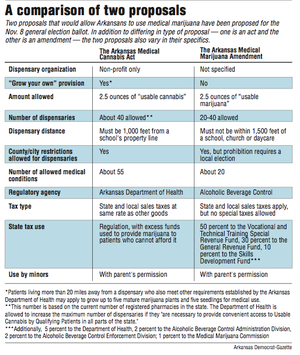 The Supreme Court rejected a lawsuit filed by a coalition of opponents who alleged problems with the Arkansas Medical Cannabis Act's ballot title. The justices ruled that the title, which will be printed on Nov. 8 ballots, is legally sufficient.

The initiated act's "ballot title is an impartial summary of the proposed measure that will give voters a fair understanding of the issues presented and of the scope and significance of the proposed changes in the law," wrote Justice Josephine Hart in the Supreme Court opinion.

It was the court's first action on this year's ballot proposals; three amendments also await decisions by the justices. One of those amendments is a competing marijuana proposal whose backer hired someone to look for signature errors in the initiated act's petitions; the findings are the basis of the second suit against the act.

Melissa Fults, campaign director for Arkansans for Compassionate Care, said she was not surprised by the Supreme Court's decision on the first lawsuit. The group backs the proposed initiated act and gathered the signatures to get it on the ballot.

"We are pleased with today's ruling from the Supreme Court on the challenge to Issue 7's ballot title and are moving forward with the hopes of the same outcome for the lawsuit challenging our signatures," she said in a statement.

The group had asked the Supreme Court to prevent votes from being counted, since it is too late to stop ballots from being printed with proposals.

"We respect the court's decision, but it doesn't change our message," said Arkansas Surgeon General Greg Bledsoe, who is the spokesman for Arkansans Against Legalized Marijuana. "We're still focused on getting the word out to explain to Arkansas citizens why marijuana is not medicine and it's not safe."

Thursday's decision ends the challenge to the ballot title, but the pending second lawsuit challenges signatures gathered for petitions for the Arkansas Medical Cannabis Act.

Benca's suit questions about 15,000 signatures gathered by Arkansans For Compassionate Care, which would leave the act's sponsor without enough valid signatures.

The Supreme Court appointed a special master to listen to arguments for that case. A report is due to the court by Wednesday.

David Couch, a Little Rock lawyer who is backing the competing Arkansas Medical Marijuana Amendment, has said he shared information with Benca relevant to the lawsuit.

During questioning earlier this week, Heidi Gay, a National Ballot Access owner, said she was owed about $30,000 by supporters of the Arkansas Medical Marijuana Amendment for the work she did finding errors in the signature pages of petitions for the Arkansas Medical Cannabis Act. National Ballot Access is a Georgia company that is hired to gather signatures for petitions.

The errors Gay found are being used for the lawsuit against the Arkansas Medical Cannabis Act.

"I did retain Heidi to review the petitions and the accompanying registration information," Couch said. "I don't dispute that."

Fults said she believes the secretary of state's office correctly certified the signatures for the act, but her group is "deeply concerned" about the amount paid to Gay "to find errors in our signatures."

"I think that [Thursday's ruling] means, with respect to ballot titles, that the Supreme Court is going to give deference," Couch said. "Unless there's something really egregious that's not included or left out, then they're going to let the people vote on these issues."

The Arkansas Supreme Court has been reluctant to knock proposals off the ballot in recent years.

In 2014, the Supreme Court rejected efforts to block two measures, one that would increase the minimum wage and another that would legalize alcohol sales throughout the state.

"The title informs the voters in an intelligible, honest and impartial manner," Justice Karen Baker wrote in the opinion four years ago. "The ballot title is not unduly long, nor is it complex or misleading."

Couch worked with Arkansans for Compassionate Care -- which backs the Arkansas Medical Cannabis Act -- on the proposed 2012 medical-marijuana measure, which received 49 percent of the popular vote.

He said he split from the group because a "grow-your-own" provision was one reason the 2012 effort failed.

Both current proposals would allow the drug to be used to treat patients under the direction of a doctor, but they differ in their approaches. For example, the act would allow patients who meet certain standards to grow their own marijuana. Fults said the provision ensures affordability and access for patients.

Couch's amendment does not contain a grow-your-own provision.

Couch and Fults both have said that support for allowing marijuana to be used as medicine has increased in the state, but they face more organized opposition this year from Arkansans Against Legalized Marijuana and Gov. Asa Hutchinson.

Hutchinson, a former head of the Drug Enforcement Administration, said earlier this month that all medicine should be approved by the U.S. Food and Drug Administration before patients use it.