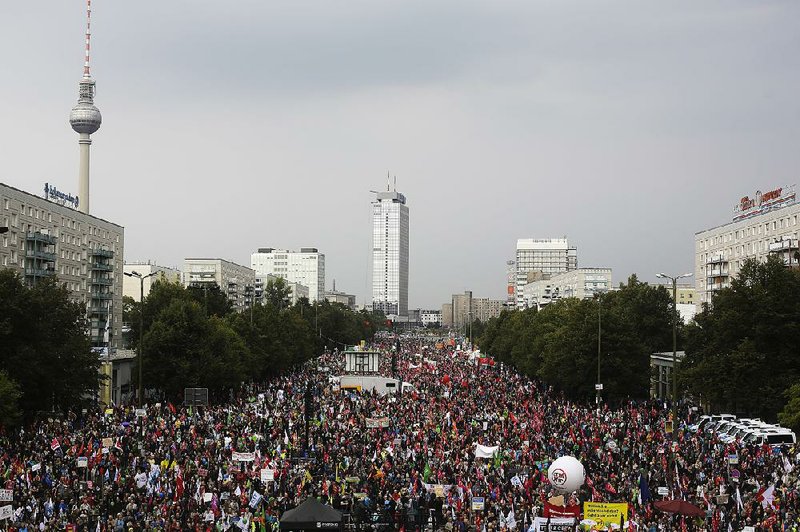 Thousands protest last Saturday in Berlin against the planned Transatlantic Trade and Investment Partnership between the U.S. and European Union.

BRUSSELS -- European Union ministers expressed pessimism Friday that the bloc can conclude a trade pact with the U.S. anytime soon and debated whether to change tack on the talks.

"There is some new start or some new approach needed," Slovak Economy Minister Peter Ziga, whose country holds the EU's rotating presidency, told reporters ahead of informal trade talks in Bratislava on Friday.

After three years of negotiations, big differences remain over the Trans-Atlantic Trade and Investment Partnership, with work needed in all of the 30 chapters the pact will entail.

The deal is aimed at removing barriers to trade between the EU and the U.S. to improve economic growth and employment. The European Commission estimates that the pact could add $133 billion a year to EU economic output and that of the U.S. economy by $106 billion.

Thousands of people have demonstrated against the pact in Germany and Belgium over the last week. They fear the agreement is a threat to the environment and public health, and would give more power to big multinational companies.

Still, the Europeans were keen to seal the trade deal before President Barack Obama leaves office in January. Looming elections in France and Germany are also influencing the negotiations.

Given the public opposition and slow pace of progress, some think now is a good time to pause and consider a fresh approach once it's clear who will hold office in the White House from next year.

"It would be reasonable, given that the subject has such a negative connotation now, to completely relaunch with a new name after the U.S. elections, with more transparency and clearer objectives, "said Austrian Economy Minister Reinhold Mitterlehner.

In contrast, good progress has been made on the trade deal with Canada, with some nations due just to add clarifying statements to the text of the agreement.

"The Americans have not been willing to make offers the way Canada has so it's guaranteed there will be no agreement this year," said German Economy Minister and Vice Chancellor Sigmar Gabriel.

"If we do restart the negotiations, we'll have to see who the next American president is," he said. Should things get moving again, he added, the talks might require "a modified [negotiating] mandate or a different attitude."

Belgian Foreign Minister Didier Reynders said "we only have a small chance of success unless the United States starts to give a bit of ground."

Even the EU's often-upbeat Trade Commissioner, Cecilia Malmstrom, conceded that "the likelihood of a quick conclusion is of course becoming smaller and smaller."

On the other side of the Atlantic, U.S. analysts see little chance of a U.S.-European trade deal anytime soon.

"Very unlikely," Caroline Freund, senior fellow at the Peterson Institute for International Economics, said. "Europe is struggling with Brexit and migration, and the TTIP is hugely unpopular in Germany," she said, using an abbreviation for the trade deal.

There's a prevailing view that an agreement would be more likely under a President Hillary Clinton than a President Donald Trump.

"Even if a President Trump wanted a TTIP, it would be hard to get Europe to work with his administration," Freund said, noting Trump's comments that Britain would be 'better off without' the EU.

Information for this article was contributed by Paul Wiseman of The Associated Press.