Sing along with Amy 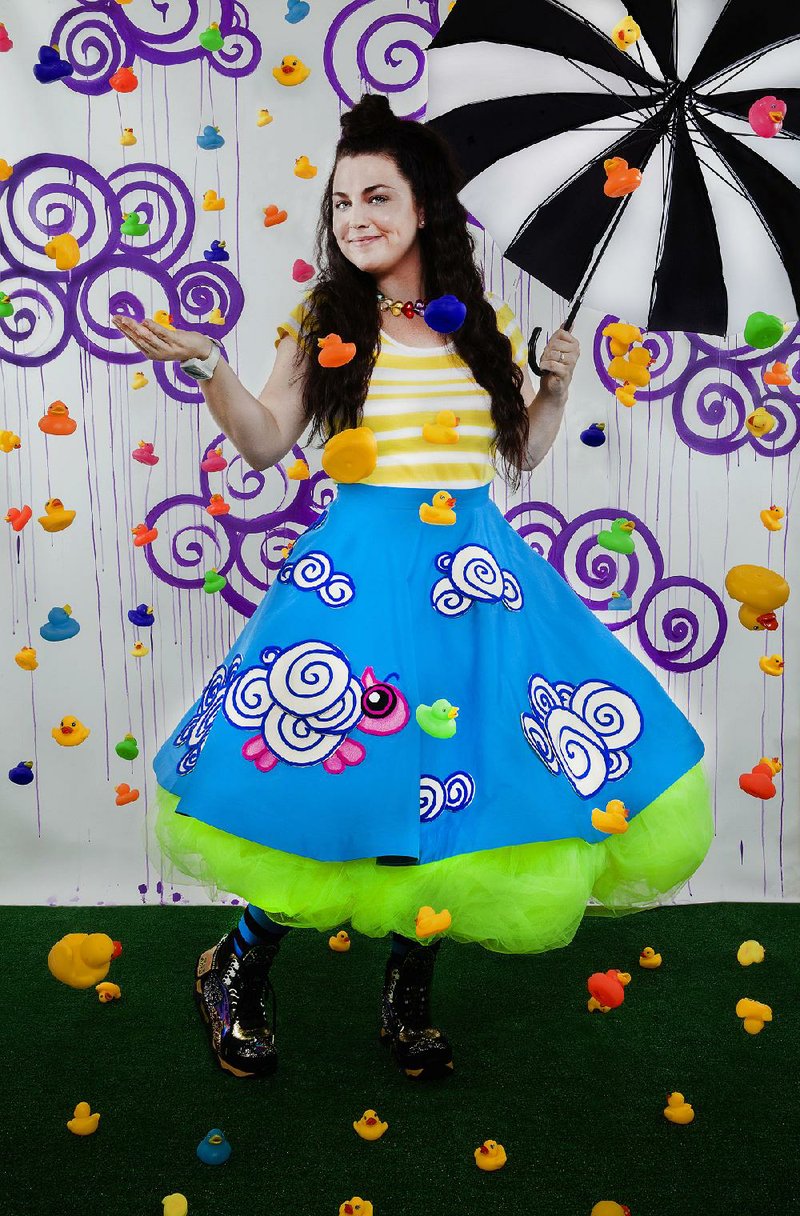 Amy Lee, the two-time Grammy-winning lead singer of rock band Evanescence, has recorded Dream Too Much, a children’s album, with her father, sisters and other family members.

A 60th birthday present from Evanescence singer Amy Lee to her father has turned into something else entirely. 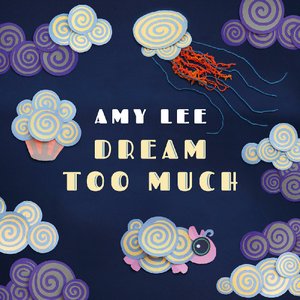 Album cover for Amy Lee's "Dream too much" 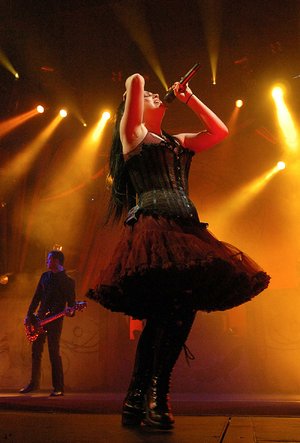 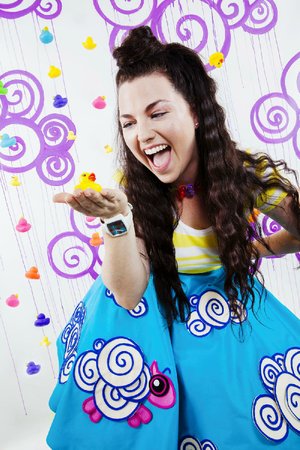 Amy Lee’s new children’s album is out Friday and is an Amazon Original music release.

Dream Too Much, Lee's fun and inventive 12-track children's album -- to be released by Amazon Originals on Friday -- began as a simple trip to Spaceway Productions studio in Fort Worth with her dad, John, and uncle, Tom.

The Lees, who moved to Maumelle when Amy was 13, are a musical bunch, you know. John, a disc jockey and voice-over artist, plays a myriad of instruments, and Tom plays with a band called The Tree Frogs in Orlando, Fla. They'd even been in a group together when they were in high school, so they figured actually going into the studio together after all these years would be a hoot.

As a bonus, the music would also be a gift for Amy's young son, Jack.

So, at the suggestion of her husband, Josh Hartzler, time was booked with her producer friend Will Hunt in Fort Worth and the Lees would knock out a few tracks and be done. Happy birthday, Pops!

But, as Amy, 34, explains, something clicked and the one-off private project became a full-scale album, albeit one aimed for the young 'uns.

"We went and we had a session for a few days and just really had a good time," she says from her home in Brooklyn. "It was sounding really great and that just snowballed into a whole record that we would actually release. It's a really beautiful, natural thing."

Still, more Lees needed to be involved, so the next thing you know, Amy, John and Uncle Tom were joined by Amy's sisters, Lori Lee Bulloch and Carrie Lee. Brother Robby would also get involved.

"When we went down for the second session I knew we were planning a real album for commercial release and I had some new ideas about involving more of the family. That's when I brought my sisters into it."

And that's how the two-time Grammy-winning singer who gave the world highly charged, dramatic, rock radio hits like "My Immortal" and "Bring Me to Life" can now be heard singing folksy, whimsical songs about ducks and bees and sleeping muffins with her family on a record that would make a perfect soundtrack for the carpool to daycare or for cranking up around the house during play dates. It may even inspire a parent or two to hum along.

The album will be available to Amazon Prime members to stream for free starting Friday. Not a Prime member? No worries. It will also be for sale to all Amazon customers, on Friday.

"Amy is a rock star and her career has been built on soaring vocal performances," says Griffith Morris of Amazon's artist and industry strategy division. "The idea of her making an album for children is so naturally unique and is exactly why we wanted to work with her."

'THE GRAPES KEEP RAINING DOWN'

Dream Too Much is a mix of Amy Lee originals and a few covers. The title track, with its chorus reminding kids and grown-ups alike that there is "no way you can dream too much," is all ukulele whimsy and fantastical lyrics -- jellyfish are building a watermelon tower and it's windy at the bottom of the ocean!

The song came to life while Lee was in her living room, strumming on an acoustic guitar and watching Jack, who turned 2 in July, play.

"I wouldn't have thought of it myself, to write the lyrics that way, but it makes it that much cooler. I can paint that world he's imagining and show it back to him."

Another playtime-inspired song, the simple, less-than-a-minute-long "Bee and Duck," came about while Lee and Jack were playing amid his strewn-about toys.

"I'm talking to him and we're playing and there are bee and duck toys and I sang that piece of music," she says. "It just came out of my mouth. And I said, 'you know what? For this, maybe it doesn't have to be harder than that.'"

Lee nails the bedtime struggle for kids and parents with "I'm Not Tired," the funny and mischievous track, with its clickety xylophone and bouncy bass creating a Seussian vibe, about a toddler who would rather do just about anything other than fall asleep.

"I had finally put [Jack] down and was watching his video baby monitor, and I see him running laps around the bed," she says, laughing at the memory. "The inspiration was thinking from his perspective, of all the things he would say if he could."

The track is a favorite of her mother, Sara, and is a spotlight for the Lee sisters' undeniable talent for harmonizing.

"They are both really great singers," says big sister Amy, who graduated from Pulaski Academy, of her sisters. "We've always sung together around the house and love harmonizing. They both loved high school choir as much as I did. We have a lot of fun at Christmas remembering songs we learned in choir. It was cool to document all of that in the studio and take it seriously, instead of it just being silliness around the house."

It was actually the second time the three Lee sisters' voices were captured in the studio. Amy invited Carrie and Lori to sing on "Call Me When You're Sober," the hit from the 2006 Evanescence album The Open Door.

"It was really just a fun excuse to be a cool big sister and fly my sisters to L.A. to come hang out in a recording studio," she says.

Dad John, when asked about his participation on the album, deflected most questions to Amy, but did tip his hat to his daughter's ability to corral all of the musical ideas and various Lees into a whole for the album.

"Along with being a unique talent, she has been an amazing band leader," John Lee wrote in an email. "She made all of the arrangements, wrote most of the songs and directed us as to what we were doing on each song."

Making the family affair of an album even more poignant is John Lee's diagnosis two years ago of Parkinson's disease, the chronic and progressive central nervous system disorder.

"Having that diagnosis made him want to seize the moment," Amy Lee says. "I think it sort of lit a fire under him, and me, too, and we wanted to capture his amazing musical ability while it's still in prime condition."

"That's an old standard in the Lee home," Amy says. "It was one of my first requests for my dad at our first session."

Another Lee household standard and the antithesis to "I'm Not Tired," is "Goodnight My Love," the standard that John Lee would sing to his kids as a lullaby.

Brother Robby makes an appearance on a cover of The Beatles' "Hello, Goodbye," which becomes a family singalong and even features a cameo by Jack.

"Robby is a huge Beatles fan, so we just had to make that happen," says Amy.

While she's been busy with Dream Too Much, Amy's day job, Evanescence, is still going strong. The band will be on the road in the U.S. through November, with the tour kicking off O̶c̶t̶.̶ ̶2̶6̶ Oct. 28* at Dallas' Southside Ballroom.

There's also a boxed set of all of the band's albums on vinyl on the way this fall.

"It will have stuff that hasn't been released before," Lee says. She's reworked the early track "Even in Death" for the set and is happy with the results.

"Super hardcore fans will know that one from me playing around Little Rock," she says. "I've re-recorded it in a way that I think is really beautiful and I think our fans are really going to like it a lot."

*CORRECTION: Rock band Evanescence starts its new tour on Oct. 28. This story on singer Amy Lee had the wrong date.

Print Headline: Sing along with Amy