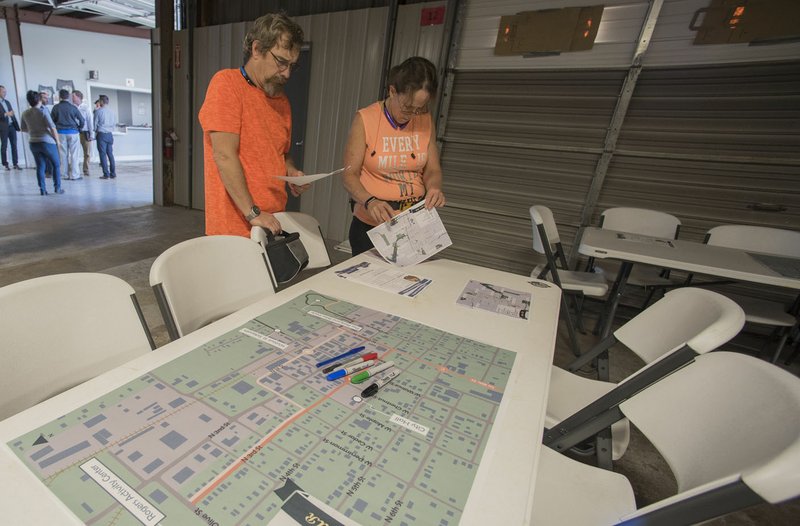 Brian and Danielle Leitch of Rogers look at maps Thursday before a public meeting at the downtown Rogers Farmers market for the BikeNWA project. The project, which is taking place in multiple cities, will build the region’s first protected bike lanes. The first step in Rogers is a demonstration project connecting the Railyard Bike Park to the Rogers Activity Center.

ROGERS -- At a table within the Downtown Rogers Farmers Market, a group of residents crowded around a map of downtown to look over proposed temporary bike lanes.

They've been given three possible routes to choose from and were asked to tell Street Plans Collaborative, an urban planning firm plotting the routes, why they prefer it.

"If we considered that one, people wouldn't use it," Carrie Perrien Smith said. "But with this one people could stop by Whitey's chicken on Saturday ... or Susie Q's, from a commerce standpoint, it makes sense."

"The streets are wider" there on Second Street, said Lance Jobe, an engineer for Rogers.

"Is there a signal only on the Second Street (route)?" Betty Evans asked. "I like (route) A."

Cycling enthusiasts who want to commute to work, school and social events by bicycle will have the chance to try temporary bike lanes during November.

The BikeNWA project held kickoff meetings this week in Bella Vista and Rogers, two of the three cities participating in demonstration projects for bike lanes. Another meeting will be in Bentonville.

The project is paid for by the Walton Family Foundation and in partnership with Benton County, Northwest Arkansas Regional Planning Commission and the Bicycle Coalition of the Ozarks.

"Instead of taking five years to build the permanent lanes, they can start planning, see what people want and implement it in weeks," said Ben Cline, public relations specialist for Rogers. More than 30 people attended the Rogers meeting.

Lanes made of temporary material such as wood, planters, plungers or road stripes made of washable paint will be put into place in a variety of locations for November. At the end of the demonstration, more meetings will be held to gather what worked best before spending money on permanent lanes.

"We're managing with three cities to test ideas to make bicycle projects and infrastructure in a different manner of delivering them very fast," said Tim Conklin of Northwest Arkansas Regional Planning. "We're excited to bring to you something that in my career we've not done before in Northwest Arkansas."

As Conklin walked around to speak with various groups, he said the project was a way to make more cycling possible without having to extend the Razorback Greenway, instead relying on low-stress bike lanes.

Planning began in early September, said Tony Garcia of the Street Plans Collaborative group. The quick turnaround of the project was designed so visitors to the International Mountain Biking Association World Summit on Nov. 2 could test it out also.

"We have had exceptionally positive responses already from our residents about the new public trail system here," said Bella Vista Mayor Peter Christie. "We're looking forward to working with the community on this project to help us grow and enhance our city and our region even more."

"We had some really great participation from the public," Lapp said. "The level of excitement in the room when they broke into smaller groups (to brainstorm) was electric. They seemed eager to provide their feedback."

Garcia said the Street Plans Collaborative practice was a way to "build, measure and learn."

"You test, make prototypes and make adjustments before the final product," Garcia said. "Cities pay tens of millions of dollars and don't go through this process and have no way to correct. Ours allows us to make course directions."

Aside from being inexpensive and temporary, Garcia said the most valuable component was getting residents involved with creation of their city in a way other than political voting.

The prototype for the Rogers demonstration project is a successful bike lane implementation in Burlington, Vt., where the community had a trail system but wanted options for roads. Burlington dedicated $4,000 for the project, which was completed in three weeks.

Garcia said the process in Northwest Arkansas will be similar and include stages of ideas, identifying teams and roles, developing a plan, making a project schedule and sticking to it until the project is built.