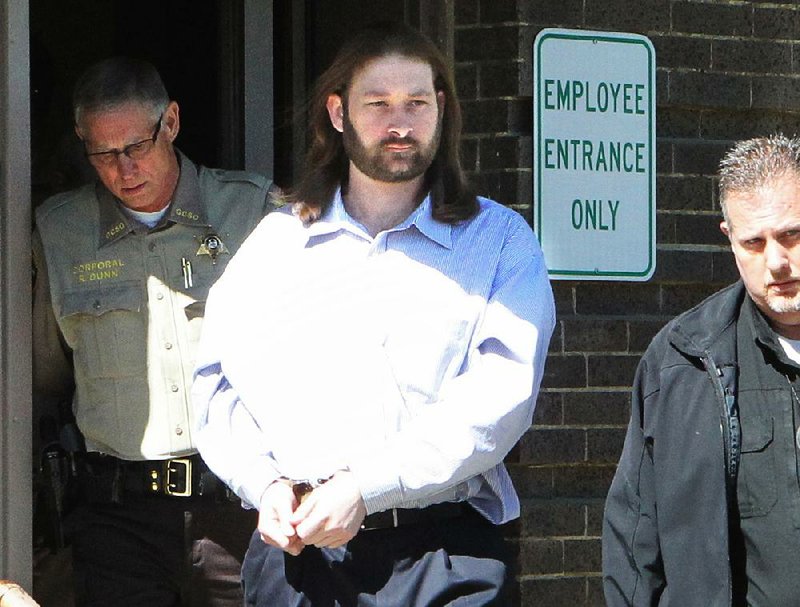 Kevin Duck leaves the Garland County Courthouse under guard Friday after he was sentenced to life in prison for the 2011 slaying of Dawna Natzke.

HOT SPRINGS -- A Garland County jury took more than four hours to declare Kevin Duck guilty of first-degree murder and sentence him to life in prison Friday for the 2011 killing of his girlfriend, Dawna Natzke, a Hot Springs Village police dispatcher.

The jury, which had recessed at 6:35 p.m. Thursday, went back into deliberations at 8:30 a.m. Friday. At 9:35 a.m., jurors returned to the courtroom with the guilty verdict.

"We're very thankful to the jury," Garland County deputy prosecutor Joe Graham said after the trial. "They made the right decision. We've become very fond of Dawna's family over the course of bringing this case to trial. As you can tell, when all three boys testified, Dawna raised three great young men. We're very happy they can rest better knowing this result."

Natzke's body was discovered Dec. 31, 2011, in a pond in northern Garland County. She was last seen alive with Duck leaving a Christmas party Dec. 21, 2011. Her burned-out green station wagon was found Dec. 22 by a U.S. Forest Service employee in woods outside Hot Springs Village, off Arkansas 298. An autopsy determined that Natzke died by blunt-force trauma and drowning.

Duck stood at the defense table, bracing himself on it with his fingertips as the verdict was read. He had no immediate reaction. But Duck burst into sobs when his father, Luther Duck, reached across a wooden divide to embrace him.

Luther Duck had told police after Natzke's disappearance that her body could be found in a pond less than a mile from Kevin Duck's childhood home. Luther Duck also showed up to help volunteers search for Natzke's body.

Natzke's family, which filled every bench on the right side of the courtroom, broke into sobs when the verdict was read. Tissues were passed around as family members and friends hugged one another.

Dawna Natzke's three sons -- Brandon Natzke, Arin Natzke and Ronnie Moeller -- together wrote a heart-wrenching tribute to their mother and agreed that Brandon, the youngest, should read it on the stand during sentencing testimony, Graham said.

Emotions were high on both sides of the courtroom as Brandon Natzke was overcome with sobs during the reading.

"The worst experience of our life was trying to act like everything was OK on Christmas back in 2011, trying to open gifts and enjoy our time together when we were all hurting on the inside," said Brandon Natzke, who was 17 at the time of his mother's death. "The thought of our mother not being there next to us was tearing us apart. The thought of never seeing her or finding her took its toll on us to the point that every Christmas isn't the same anymore; that because of one man, she is gone. Christmas will forever be tarnished in our lives."

Brandon Natzke took the media and the defense team -- T. Clay Janske and Brian Johnson -- to task for portraying his mother in what he maintained was a negative light during the weeklong trial.

"The lies in the news and the courtroom is not who she was. There were so many details that were left out about our mother," he said.

She was the kind of mother who never bought herself another piece of clothing just so she could ensure her sons had what they needed, he said.

"She really is the person we strive to be like," Brandon Natzke said. "The one who is unselfish and puts everyone first. The one who will talk to anyone to make them feel important. The lady who worked hard to make sure her sons were happy even if it brought her to exhaustion. The person who smiled and laughed and could start a party by herself. She was the kind of person who was who she was, and nobody was going to change that."

Brandon Natzke departed from the prepared statement at the end of his testimony, looked toward Kevin Duck and said he was touched by seeing Luther Duck embrace his son after the verdict, especially given the fact that Luther Duck has "been on our side" through it all.

"Just like Luther did with his son, God is looking down at Kevin in the same manner: That he has made a mistake -- a mistake he can never take back -- but he still loves his son," Brandon Natzke said, tears rolling down his face. "So I pray for Kevin. And I pray that through this decision and as he goes forward with his life that he knows there's a father out there; that there's a God who still truly loves him."

Janske, in an interview after the trial, said Brandon Natzke delivered the "best victim impact statement" he has ever heard. Anything negative that was said about Dawna Natzke during the trial was unintentional, Janske said.

"It's one of the few trials where the credibility of the victim was really not put into play," Janske said. "I think the only thing bad said about her at all was that she liked drinking Miller Lite. In my book, that's not a bad thing other than I prefer Coors Lite. My client never told me a bad word about Dawna Natzke. I've had this case for half my career and I've never heard a bad word about her from anyone."

Before Brandon Natzke's testimony, Kevin Duck's brother, John Duck, testified for the state about the abuse and terror he and his little sister endured at the hands of Kevin Duck during their childhood.

He relayed a time as a 7-year-old when a teenage Kevin Duck made "pretty extraordinary" demands of them. Unsatisfied with their response, Kevin Duck grabbed a shotgun and ran through the house threatening suicide. He locked himself into a bedroom and pulled the shotgun's trigger.

According to the account, the two children outside the door called frantically for their brother but were met with silence. When the door finally opened, Kevin Duck stood there in silence. He had shot the gun outside the bedroom window to make it sound like he had killed himself.

John Duck said he watched his brother go through two marriages where he psychologically and physically abused his wives. At one point, his sister intervened in one of the bad relationships, and John Duck said he was woken up with a gun in his face and Kevin Duck threatening to kill his sister.

The incident escalated to Kevin Duck fighting his brother and sister with a 3-foot jack handle. His sister suffered injuries that required a hospital visit. Duck was charged with aggravated assault in 2009 over the incident and sentenced to five years' probation.

"I've maintained the best possible relationship with him throughout my life, considering all the circumstances and considering our childhood and the reality we were in," John Duck testified. "Contact ceased the night I heard Dawna Natzke was missing."

Amber Duck, Kevin Duck's second wife, testified that both she and the couple's two children were subjected to repeated violence during her marriage.

During one fight, Kevin Duck dragged his pregnant wife down the steps of their home, threw her in a van and dropped her off alone down the road, she said. Another time, Amber Duck testified, Kevin Duck beat his 2-year-old daughter Haylee with a piece of plastic tubing so badly that her bottom was purple.

"She couldn't even sit down," Amber Duck said. "Over a shoe."

She said she also witnessed her husband slapping her daughter in the face so hard that she "flew across the room and landed on her back."

Amber Duck left the marriage after her parents threatened to take away her children if she stayed.

Janske, the defense lawyer, declined to cross-examine the sentencing witnesses, telling the jury that Kevin Duck had asked him and Johnson not to add to the family's grief by questioning their impact statements.

As members of the Natzke family were leaving the courtroom, they stopped to embrace Kevin Duck's father, siblings and other family members.

Duck's mother was allowed to remain in the courtroom after the crowd dispersed to say a private goodbye to her son.

Janske said later that the verdict would be appealed.

"We do feel like we've got some very good appeal options. That's the biggest reason Kevin didn't want to give a statement at sentencing," Janske said. "We had a strong feeling that if there was a conviction they would give life. We thought we had countered some evidence that would create a reasonable doubt, but obviously it didn't. We've already started the process."