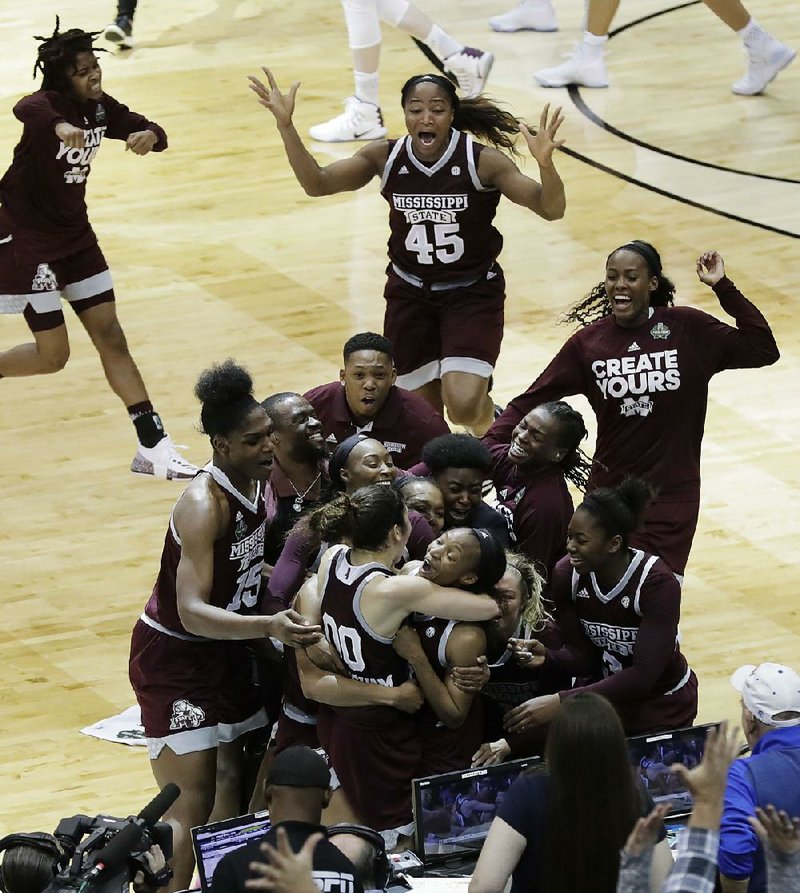 Mississippi State’s Morgan William is mobbed by her teammates after she hit the game-winning shot at the buzzer to give the Bulldogs a 66-64 overtime victory over Connecticut at the Final Four in. Dallas on Friday night. The victory ended UConn’s record 111-game winning streak.

"I live for moments like this," William said after the game. "I wanted to take the shot and knew I could make it. I saw the opening and got it off and made the jumper."

The Bulldogs (34-4) will play South Carolina for the national championship Sunday night in a matchup of two SEC teams.

Mississippi State and UConn met in the Sweet 16 last season when the Huskies won by 60 points -- the biggest victory in regional semifinals history. All season long the Bulldogs had that humiliating loss on their minds.

"Last year, you had to question everything after we got beat as bad as we did," Bulldogs Coach Vic Schaefer -- a former University of Arkansas, Fayetteville assistant women's basketball coach -- said. "How many times do you get a chance to come back and beat a team after they beat you the way they did? We don't have to play them 100 times. This is not the best of seven. All we had to do was beat them one time."

Now they've erased that loss, beating UConn (36-1) -- which had won the past four national championships -- on the grandest stage.

UConn Coach Geno Auriemma had a wry smile on his face after the final shot. There wasn't much else he could do, another title beyond his grasp.

"We had a couple possessions where we needed to make shots and a couple free throws we didn't covert," Auriemma said. "You can't miss opportunities like that against Mississippi State.

"When we've beaten people the way we have at times, sometimes people say they don't want to play Connecticut again or sometimes they'll go back and look at what happened and learn from it. What Vic Schaefer has done at Mississippi State is nothing short of amazing since he took over."

Mississippi State led 64-62 with 26.5 seconds left in overtime before a replay review resulted in a flagrant foul on the Bulldogs' Dominique Dillingham. Katie Lou Samuelson made two free throws to tie the game.

After a UConn turnover, William held the ball at the top of the key before dribbling to her right and pulling up for the shot, with the ball in the air when the buzzer sounded.

UConn rallied from a 16-point first-half deficit, its biggest during its NCAA record streak, to take a 59-56 lead in the fourth quarter. The teams were tied at 60-60 when the Bulldogs had a chance to win it in regulation, but William's shot was blocked.

Neither team scored much in overtime, with Teaira McCowan's layup with 1:12 left in the extra session breaking a 62-62 tie for Mississippi State.

During their past two decades of dominance where they've won 11 national championships, the Huskies rarely found themselves trailing -- let alone by more than 10 points. This was the first time this season that UConn was losing in the fourth quarter.

The Bulldogs got off to a great start, taking it right at the Huskies. The Bulldogs led 15-13 before scoring 14 consecutive points to go up 29-13.

The Huskies rallied to within 29-25 as senior Saniya Chong scored seven points during a 12-0 run. Mississippi State answered and was up 36-28 at the half.

UConn came back in the third quarter behind its trio of All-Americans with Gabby Williams, Napheesa Collier and Samuelson keying a 12-3 run to start the second half.

The loss ended a 28-game NCAA Tournament winning streak for UConn. Its last loss came to Notre Dame in 2012 in the Final Four. That was the last overtime game in the national semifinals.

Print Headline: They did it