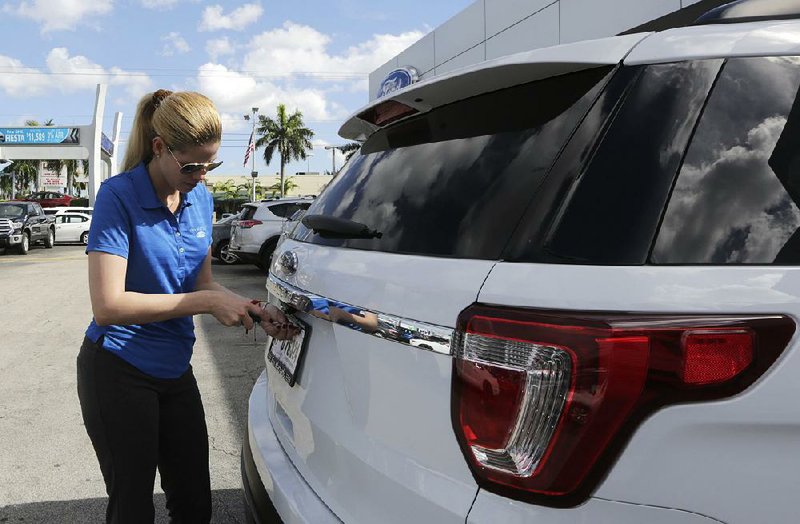 A salesman at a Ford dealership in Hialeah, Fla., removes the dealer tag from a 2017 Ford Explorer in this file photo. Ford was among several automakers to report falling sales in March.

Sales for the month fell 1.6 percent to just over 1.55 million vehicles, surprising analysts who expected a small increase.

For now, anyway, the auto industry isn't worried. It's making solid money selling SUVs and trucks to consumers who are loading up on expensive features. But some analysts see large inventories of cars as a problem. Car sales were down almost 11 percent, while truck and SUV sales rose 5.2 percent, according to Autodata Corp.

"Trucks and SUVs, although they did well, it's still hard to make up the lack of car sales," said Jessica Caldwell, executive director of industry analysis for the Edmunds.com car-buying website. "You can't have the other side of the industry completely not performing well."

Hyundai suffered the biggest decline at 8 percent, followed by Ford at 7.5 percent, as popular car models such as the Sonata and Fusion suffered big decreases. Fiat Chrysler sales tumbled 5 percent, Toyota fell 2 percent and Honda just under 1 percent. But Nissan sales rose over 3 percent, Volkswagen gained just under 3 percent and GM posted an increase of just under 2 percent, all helped by SUV sales.

Drawing in buyers required a lot of cash, low-interest loans and other incentives, however. Dealer stocks are growing because cars and trucks aren't moving off the lots as fast as they did in the past.

The LMC Automotive consulting firm said incentives hit a March record, averaging $3,768 per vehicle and the highest amount since March of 2009. In addition, cars and trucks are sitting on dealer lots for an average of 70 days, the longest period for any month since July of 2009 during the sharp economic downturn.

Caldwell predicts this year's sales will drop to 17.2 million, still strong but down from last year's record of 17.55 million. Through March, overall sales were down 1.5 percent.

If automakers can't reduce inventories, they'll have to offer even more incentives, which will reduce industry profits. Even some truck and SUV inventories are starting to climb, she said.

Since vehicle values could fall if demand falters, that could mean an end to sweet lease deals for consumers, she said. That could mean lower sales, production cuts and a drag on the economy in a worst-case scenario, she said.

Yet even at Ford, which saw a 24 percent decline in car sales, executives were happy, largely because of a 10 percent increase in sales of the F-Series pickup.

Vice President of Sales Mark LaNeve said buyers are loading the trucks with premium options, raising average sale prices by $2,500 over a year ago.

"[Sport] Utilities and trucks are very positive in terms of our economics," he said. "If you think about it, it means revenue is up."

Dealers concede inventories are on the rise, but Mark Scarpelli, owner of Chevrolet, Kia and Fiat Chrysler dealers north of Chicago, said he considers it a normal part of the business cycle.

In the Midwest, Scarpelli said, dealers build inventory during cold-weather months in preparation for spring and summer selling seasons. "There might be some higher inventory levels on certain car lines or truck lines, but that's going to happen in good times or bad," said Scarpelli, who also is chairman of the National Automobile Dealers Association.

Automakers also are raising incentives a bit to keep sales moving, he said.

A sell-off in auto stocks Monday sent GM down 3.4 percent, Fiat Chrysler down 4.8 percent and Ford lower by 1.7 percent.