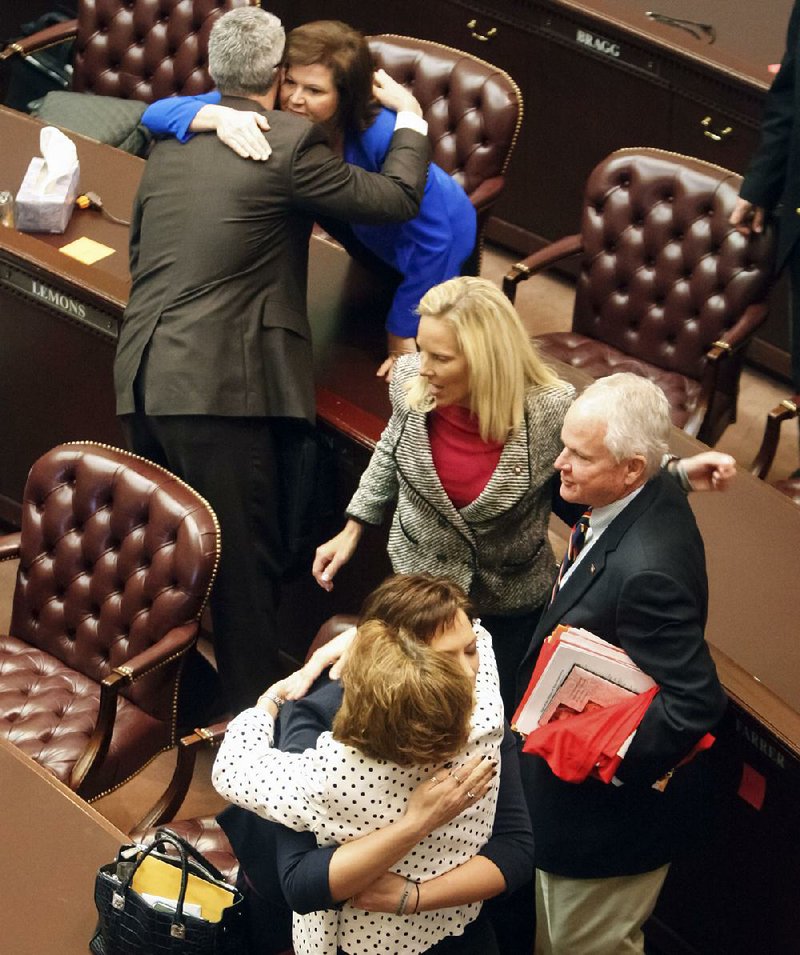 Lawmakers embrace on the fl oor of the House on Monday after Speaker Jeremy Gillam, R-Judsonia, gaveled the 91st General Assembly into recess. The next meeting will be May 1, when the session is to officially adjourn.

A revived bid to pass a bill on the collection of online sales taxes failed in the House on Monday, the last full day of the Arkansas General Assembly's regular session for a while. 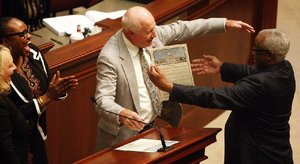 The session recessed until May 1, when it will adjourn for good, legislative leaders said. The delay in adjournment gives lawmakers time to consider fixing errors in bills or override any vetoes.

Part of Monday was celebratory. While legislative leaders bemoaned a lack of solutions for increasing long-term highway funding, they and Gov. Asa Hutchinson also touted successes like cutting taxes. In the House, one display of bipartisanship included a "bromance" citation for Rep. John Walker, D-Little Rock, a civil-rights lawyer, and Rep. Kim Hendren, R-Gravette, a chicken farmer.

But representatives also revived a familiar debate on the 85th day of the 91st General Assembly over whether to enact legislation aimed at getting Internet retailers to charge sales tax and remit the money to the state. The tax is already owed under current Arkansas law, but it's the responsibility of taxpayers to pay it. Few do.

Rep. Dan Douglas, R-Bentonville, told the House that Senate Bill 140 was a matter of simple fairness.

Every year, he said, he buys five pairs of Wrangler bluejeans. This year, he bought one pair at Academy Sports, a second pair at Tractor Supply Co. and the remaining three online, he said.

The online retailer did not collect any sales tax, he said.

"They're the same brand of bluejeans. They're the same style, the same size, used on the same fat body for the same purpose, and they didn't collect sales tax," he said of the online seller. "Now, is that fair? And part of our jobs is to be fair and equitable."

But opponents of SB140 -- which was sponsored by Sen. Jake Files, R-Fort Smith -- said it was unconstitutional. A 1992 U.S. Supreme Court decision found that a state cannot require the collection and remittance of sales taxes by companies that do not have a physical presence in that state.

"This is interstate commerce. This is one of the powers that is granted solely to the Congress," said Rep. Stephen Meeks, R-Greenbrier. "This is a federal issue only. The states do not have this authority."

Files has said the bill is similar to a law in South Dakota that's under review by that state's Supreme Court. He also said the decision by online retailer Amazon to collect sales taxes and pay the money to each state that charges sales tax addresses the constitutional question.

Opponents of the bill said, if enacted, it would be felt as a new tax.

"We have to take a burden off if we're going to put a burden on," said Rep. Bob Ballinger, R-Hindsville. "That's the only way I can ever support a new tax and I get it -- there is a use tax out there -- our citizens aren't feeling it. But they will feel this."

The vote was 43-50. It required 51 votes for passage in the 100-member House. If the bill had passed, members of the Senate planned to suspend the rules to concur with a House amendment on the bill. From there, it would have gone to the governor for his signature.

Files has estimated that SB140 could increase state tax revenue by up to roughly $100 million a year, while state officials have said they don't know how much the bill would raise in additional tax revenue.

It would require out-of-state companies to collect taxes on sales to Arkansans if the seller's gross revenue from those sales exceeds $100,000 or it had at least 200 transactions for delivery into Arkansas in the previous or current calendar year.

SB140 was supported by brick-and-mortar stores from Wal-Mart to Ozark Outdoor Supply in Little Rock.

"To me, it's a really black-and-white issue. There's no gray area on it. I don't understand how somebody can look at it in any way other than it's not fair," said Jim Frank, owner of Ozark Outdoor Supply, in an interview Monday. "I mean Wal-Mart's behind this thing, too. You've got little old me sitting up here on Kavanaugh beating them over the head, they've got Waltons up there swinging a big old bat, it's just beyond me."

While Amazon is the leading online seller in the United States, it accounted for less than half of all online sales in 2016, according to Slice Intelligence, which tracks email receipts of online orders. Frank said their voluntary collection won't affect him much because much of what he stocks isn't available on Amazon.

The bill was opposed by Conduit for Action, a conservative group.

"This vote saves the taxpayers from facing a heavy burden of possibly over $100 million a year in an increased collection of taxes," the group said in a statement. "It appears the House of Representatives realized this was unconstitutional and would negatively impact their constituents and voted this down."

Files said he's disappointed with the fate of his SB140.

"We still got several people that didn't even get to vote," he said. "That's part of the process, but I am very frustrated."

Hutchinson said to count him as a supporter of SB140, calling it a matter of fairness.

"This will be resolved. It is just a matter of time," he said. "I had a number of legislators that came up to me and said they want to continue to work on that, so we'll see when that can be addressed in a future legislative session."

SB140 was one of a number of Internet sales tax bills.

House Bill 2085 by Rep. Johnny Rye, R-Trumann, did not aim to collect more Internet sales taxes but would earmark online sales tax revenues above $15 million for roads. It was referred to a Senate committee, but no action was taken on it.

Meanwhile, House Bill 1388 by Douglas would require out-of-state retailers to tell Arkansas customers and the Department of Finance and Administration each year the total amount of each customer's purchases. The bill was approved by the House, but was not voted on in the Senate.

After the House adjourned, pictures were taken and hands shaken, House Speaker Jeremy Gillam, R-Judsonia, told reporters that among victories this legislative session -- such as increasing foster care funding by $26.7 million in the state's general revenue budget -- he believes there's work to be done with taxes and highway funding.

Some of that work will be done by the Arkansas Tax Reform and Relief Legislative Task Force. Files said he expects his bill to be considered by the 16-member panel.

Gillam said he's met with some members interested in serving on the task force, but has not made appointments yet.

For now, Gillam plans to go back to to his berry farm -- which he said raises peaches, strawberries, blueberries and blackberries as well as debt -- and help his brother with the family business.

Looking back on the session, Senate Democratic leader Keith Ingram of West Memphis said the "most disappointing thing was there was no action on highways.

"We are digging deeper in the hole," he said. "It seems to me the concerns that many of us had about the budget continues to look less than favorable.

"All in all, it was a contentious legislative session in many ways. But we discussed a lot of good things for the people of the state of the Arkansas. Hopefully, the things that are good will outweigh the bad," Ingram said.

Over the duration of the session, more than 2,069 bills were introduced. As of Monday evening, nearly 750 new laws and appropriation bills were approved by the 91st General Assembly.

Hutchinson, during a news conference Monday, said, "In my judgment, this is one of the most pro-growth, pro-jobs General Assemblies that have met in recent memory."

The governor said the plan is for the Legislature to finally adjourn May 1 and "the three days following we have set aside for a potential special session" to clear the way for his administration to apply for a waiver to the Trump administration for the state's Medicaid expansion called Arkansas Works.

Among measures approved in this year's regular session, Hutchinson cited laws that will cut individual income taxes for Arkansans with taxable income of less than $21,000, exempt military retirees from state income taxes and reduce the sales tax on replacement parts for manufacturing in exchange for eliminating the InvestArk economic development incentive.

"Of very great significance, we avoided a North Carolina-type bathroom bill in this legislative session," Hutchinson said, referring to legislation that dictated which restrooms were to be used by transgender people. He said he made it clear that "this is not a problem in Arkansas. It does not cry for a solution. It would be harmful for this state and I am delighted the General Assembly did not pass any legislation in that regard."

Hutchinson said the fact that legislation wasn't passed to help fund the state's highways demonstrates the importance of last year's special session in which the Legislature enacted his plan to provide about $47.5 million a year in state funds to match $200 million a year in federal highway funds. A bill that didn't make it through the Legislature would have referred to 2018 voters a highway bond issue and fuel tax increase.

"As to the long-term solutions, it emphasizes that it is difficult to get a referral of this General Assembly out to the voters, and that I hope the leadership of our state and the business community and others will look at an initiated act that might go on the ballot for a highway program," he said. "Otherwise, we'll continue to debate the long-term solution in future sessions."