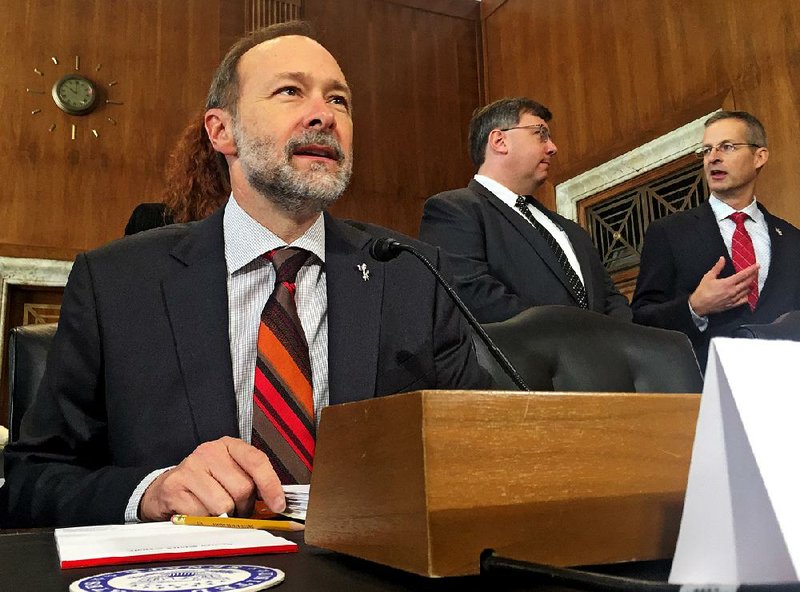 Testifying Tuesday before the U.S. Senate Committee on Energy and Natural Resources about cyberattacks, Duane Highley, president and CEO of the Arkansas Electric Cooperatives Corp., called for federal officials and private entities “to work together to improve information sharing … .”

WASHINGTON -- The leader of the Arkansas Electric Cooperatives Corp. told lawmakers Tuesday that his industry is battling to protect the nation's energy grid but needs greater cooperation from federal officials.

Duane Highley, the group's president and chief executive officer, used military terms as he testified before the U.S. Senate Committee on Energy and Natural Resources.

"The electric sector, like other critical sectors, is now the front line of international warfare. We're under constant cyberattack. Many of those attacks are sponsored by foreign enemies and nation states," he said.

The Quadrennial Energy Review Task Force, which was created by President Barack Obama, is urging that the electric sector be treated as a "national security asset," Highley noted.

"Most of the critical infrastructure is owned and operated by private industry. So for that reason, we must have timely access to actionable information obtained through the defense and intelligence-gathering capabilities of our government," he said.

"We have to work together to work the grid."

Highley was one of six panelists who spoke at the hearing called "Efforts to Protect Energy Delivery Systems from Cybersecurity Threats."

For more than two hours the panelists outlined their concerns and fielded questions.

Highley, who also was testifying on behalf of the National Rural Electric Cooperative Association, told the lawmakers about communication problems.

He called for federal officials and private entities "to work together to improve information sharing in both directions: government to industry, and industry to government."

Others also discussed the need for improved cooperation.

Dave McCurdy, the president and CEO of the American Gas Association, criticized the Department of Energy for its handling of security clearances.

"For me, this is not a mere talking point," said McCurdy, who was chairman of the House Intelligence Committee during his time as a Democratic congressman from Oklahoma. "Despite my military, congressional and intelligence experience and currently holding a [Department of Defense] clearance, I have not received a [Department of Energy] security clearance ... that I applied for over a year ago."

As a result, McCurdy said, he has been unable to attend meetings where threats to the nation's energy system are discussed, despite leading a group that represents more than 200 natural-gas companies nationwide.

During the hearing, witnesses mentioned cyberattacks on Ukraine's power grid in 2015 and 2016 that knocked out power for thousands of residents.

Andrew Bochman, a senior cyber and energy security strategist with the Idaho National Laboratory, described having "a palpable sense of foreboding" as he watches cyberthreats increase.

U.S. Sen. Jim Risch, one of the members of the Senate panel, also expressed concern.

"I'm convinced that the next major event in America is going to be a cyber event," said Risch, R-Idaho.

Acknowledging that efforts are underway to prevent an attack, Risch said, "We're running fast, but we need to run faster to catch up to where we need to be."

Patricia Hoffman, the acting assistant secretary of the Office of Electricity Delivery and Energy Reliability, testified that the department she represents is "focusing on cybersecurity and [the] resilience of energy delivery systems. ... Our economy, national security and even well-being of our citizens depend on reliable delivery of electricity."

"The department is committed to working with our public and private sector partners to protect the nation's critical energy infrastructure, including the electric power grid, from physical security events, natural and man-made disasters and cybersecurity threats," she said.

Hoffman advocated for what she called an "ecosystem of resilience" -- a network of government and industry leaders and others who can prepare for, prevent and respond to threats.