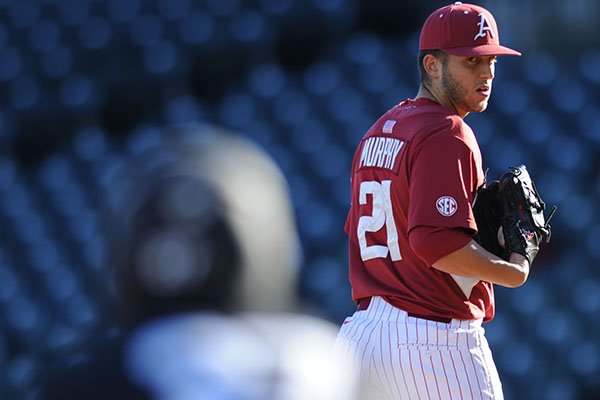 Arkansas starter Kacey Murphy checks on Grand Canyon left fielder Quin Cotton as he leads off of third base Wednesday, April 5, 2017, during the third inning at Baum Stadium.

FAYETTEVILLE -- The Arkansas Razorbacks stayed hot going into their weekend series against LSU.

The University of Arkansas, Fayetteville beat Grand Canyon 11-2 and 6-1 Wednesday at Baum Stadium before an announced crowd of 1,036 in a doubleheader created by a weather postponement.

RADIO Razorback Sports Network statewide network. Not all games will be carried by all affiliates. Check local listings.

SHORT HOPS Arkansas improved to 18-1 at home this season. The Razorbacks’ only loss at Baum Stadium was to Rhode Island, 3-0, on March 12. … The Razorbacks raised their home run total to 40 on the season Wednesday after Jared Gates, Eric Cole and Carson Shaddy hit one apiece. … Grand Canyon fell to 2-4 against top 25-ranked teams this season. The Antelopes won 2 of 3 against Oklahoma State to open the season and lost to Arizona before playing the Razorbacks.

Wednesday's opener was the resumption of a Tuesday night game postponed in the second inning because of lightning and heavy rain.

"We probably spent eight hours here today, so it's good to get two wins instead of losing two games when you're here all day," Arkansas third baseman Jared Gates said. "You might as well win them."

"Over that stretch, we've found a lot of different ways to win, whether it's been hitting the ball out of the park or games we've really pitched well or made plays defensively," Arkansas Coach Dave Van Horn said. "That's kind of what it's all about.

"You've got to be able to do a little bit of everything to put together a run like this."

"The team's confident," Van Horn said. "They seem to pick each other up pretty well.

"If somebody doesn't get the job done, it seems like somebody behind them does up and down that lineup and out of the bullpen."

Five Arkansas pitchers combined for a school record-tying 18 strikeouts in Wednesday's second game. The Razorbacks also had 18 strikeouts in a 10-0 victory over Missouri State on March 25, 2009.

Sophomore left-hander Kacey Murphy (3-0) started for Arkansas and went four scoreless innings with a career-high 10 strikeouts. He had 51 strikes on 79 pitches.

"Throwing strikes is my first priority, and things just happen the way they do," Murphy said. "Fill it up, get ahead and strikeouts are just kind of a plus with it.

"I attacked with the fastball. I recognized early they sat on pitches in certain counts, and I could work on my fastball more than I usually do."

"For us to go out and throw the ball the way we did up and down the staff was tremendous," Van Horn said. "I didn't know we set a record for strikeouts.

The Antelopes (12-16) left four runners on base against Murphy, including on second and third base in the third inning and at second base in the fourth inning.

"Murphy got out of a couple of jams," Van Horn said. "That was big for him. At the time the game was tight, so it was a good job."

Gates hit a two-out, two-run double to push Arkansas' lead to 5-0 in the fifth inning of Wednesday's second game.

"That was probably the biggest hit of the game," Van Horn said.

Arkansas took a 2-0 lead in the second inning when Shaddy hit a home run and Jordan McFarland singled and scored on a double by Alex Gosser.

Gosser's sacrifice fly to center field scored Shaddy -- who reached on an error -- to make it 3-0 in the fourth inning.

Gosser, a senior catcher, went 2 for 3 with a sacrifice fly and drove in 2 runs.

Arkansas had 13 hits -- including home runs in the third inning by Gates and right fielder Eric Cole -- in Wednesday's opener.

It was the first home run as a Razorback for Gates, a junior college transfer who missed the first 21 games because of a right hand injury.

Lee, the designated hitter in the first game, was 3 for 5 and scored 2 runs.

Spanberger hit a triple -- and just missed a home run -- with a drive in the seventh inning that hit off the top of the center-field wall above the 400-foot marker and bounced back onto the field. He finished 2 for 5 with an RBI.

Gates went 3 for 7 with 4 RBI in the doubleheader.

"He squared up some balls," Van Horn said. "He's seeing the ball good."

"I just needed time, seeing live arms for a few weeks in a row," Gates said. "I wasn't discouraged.

"I just kept battling. It just took a little bit of time to get to doing what I know I can do."