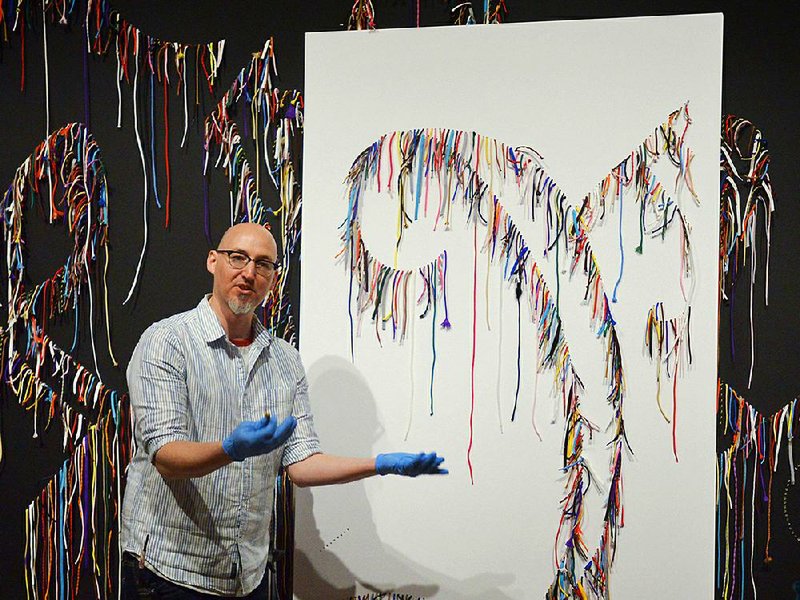 Kevin Haynie, an art preparator at Crystal Bridges Museum of American Art, explains the installation process of Nari Ward’s wall sculpture We the People. The installation is made of shoelaces that spell out the first three words of the preamble to the U.S. Constitution.

The administrative staff, volunteers and other employees at Crystal Bridges Museum of American Art typically don't have the opportunity to get involved in the art installation process.

But one of the museum's latest acquisitions, Nari Ward's wall sculpture We the People, presented a perfect opportunity for participation. So one by one, a group assembled in the gallery last month took turns using a tool that resembled a small screw driver to insert a shoelace into a pre-drilled hole in the museum wall.

The process was repeated over and over throughout the course of a week as thousands of colorful shoelaces were put in place in the 8-by-27-foot piece, outlining an elegant script of the first three words of the preamble to the U.S. Constitution. Kevin Haynie, a preparator, or art handler, at the museum, said it was his first recollection of a community installment at the museum during his three years with Crystal Bridges, and that the process was fitting for We the People.

"That's the spirit of the piece," Haynie said. "The community involvement is really the heart of it."

The installation of Ward's work was completed last month and will be featured during the "Art in Conversation: Environment, Identity and Memory" symposium, which begins with a conversation featuring museum founder Alice Walton and Deputy Director Sandy Edwards today at 6:30 p.m. The symposium will bring artists and historians together to discuss issues of identity, race, class, gender and the environment as they relate to art in the museum's permanent collection.

Ward, a New York-based artist, will attend Saturday. He's scheduled to kick off the day at 10 a.m., by discussing We the People and how art can serve as a call to action with Crystal Bridges curator Lauren Haynes.

"Giving artists the opportunity to speak on behalf of their work is so powerful," Crystal Bridges curator Chad Alligood said. "We want to learn from them. As a contemporary curator, that's really when you hit the sweet spot when you bring artists here, put them in conversation with the audience and let the sparks fly. Hopefully that's what we see at the symposium."

Ward was born in St. Andrews, Jamaica, and moved to the United States as a child. He lives and works in Harlem. Earlier this year Ward received the Vilcek Prize, a $1,000 award given to immigrants who have "made lasting contributions to American society through their extraordinary achievements."

Alligood said Ward walks throughout Harlem collecting everyday objects and incorporates them in his work, giving them new meaning. For We the People, Ward used thousands of shoelaces -- the museum is not certain of the exact number -- and used them to outline the script.

In his work, Ward often addresses the subjects of race, immigration and power structures in American society. Alligood said those themes are embodied in We the People, in which Ward underlines the importance of those three words and questions the tenants of society, asking, "Who gets to speak for us?" He said he also believes the piece serves as a call to action.

"If you noticed, the shoelaces are inserted into the wall. But they're also untied," Alligood said. "The suggestion here is that the work of the Constitution in these untied shoelaces is left undone and it's all of our responsibility to participate and lend a hand and to participate in democracy."

The wall sculpture installed at Crystal Bridges is one of three versions of We the People created by Ward. A version with a white background was created in 2011. Ward also recreated that version for the New York Historical Society in February.

The planning process at Crystal Bridges took months, according to Haynie. The museum received detailed instructions for the piece. For instance, it needed to be 36 inches off the ground.

When it was time for the installation to begin, a portion of the wall in the 1940s to Now Gallery was prepared and painted black. Those working on the preparation used a template to outline the three words on the wall and then drilled thousands of holes that would eventually house the shoelaces.

The shoelaces were stored on white panels matching the script on the wall. They were moved from the panels and inserted into the corresponding spaces on the wall, one by one, over the course of a week.

"The method of inserting the shoelace into the wall is a kind of meditative practice," Alligood said.

Haynie thought it would be simple enough to invite others to participate, helping them get involved and understand what it was like to be help prepare an exhibit. While much of the work was done by Crystal Bridges staff and volunteers, Haynie said some Alzheimer's patients and their caretakers also lent a hand.

"We tried to work in as many people as we could," Haynie said when the installation of We the People was close to wrapping up last month. "I think in the future, if this is successful, I would like to incorporate as many people outside the walls of Crystal Bridges as possible."