For killer, death only answer; inmate says he would decline clemency 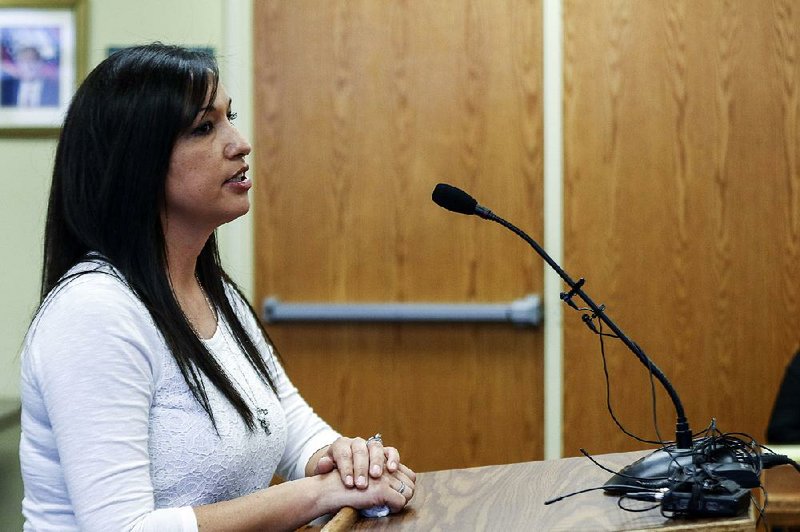 Lacy Phillips Manor speaks Friday during a clemency hearing for inmate Jack Jones Jr. in Little Rock. When she was 11, Manor survived an attack by Jones in which her mother was killed.

VARNER -- Death row inmate Jack Jones Jr. declined to face the people judging Friday whether he deserves to live, though in a letter he expressed the same sentiments as the day more than 20 years ago when he faced a judge and a murder charge. 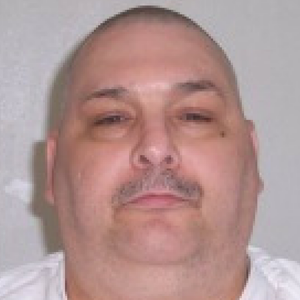 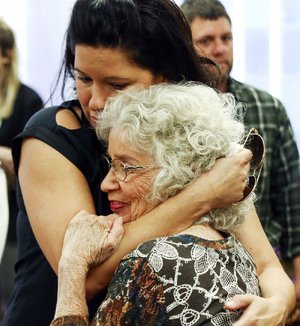 Photo by Mitchell PE Masilun
Nadra Jessup (foreground), the mother of victim Mary Phillips, is embraced Friday after a clemency hearing for death-row inmate Jack Jones Jr. at the Arkansas Parole Board in Little Rock.

He asked the state to kill him.

Jones is scheduled to be put to death April 24 for the 1995 rape and murder of Mary Phillips and the beating of her 11-year-old daughter, Lacy, whom he left for dead.

His execution is among seven set to take place over 11 days this month. A federal judge Thursday blocked the execution of an eighth prisoner.

After the execution dates were set in February, Jones was not among the group who asked that their pleas for clemency be heard by the Arkansas Board of Parole. Jones filed a belated application earlier this week that was accepted by the board, though it was past the deadline.

At the Varner prison Friday, Jones' attorney, Jeff Rosenzweig, told the Parole Board that his client had declined to make the trip down from death row for his scheduled clemency hearing.

Instead Rosenzweig read, with some difficulty, a handwritten letter he said Jones had penned from his cell Friday morning.

"I'm sorry, not only for what I did but for you having to come here," Jones wrote in his letter.

If granted clemency by the governor, Jones wrote that he would decline it.

"There's no way in hell I would spend another day or 20 years in this rat hole," the letter read.

The Parole Board is expected to make its clemency recommendation early next week.

According to Rosenzweig, Jones is an amputee who lost his leg in prison from diabetes. Bound to a wheelchair, Jones also takes methadone, an opioid, for severe back pain.

The attorney said he did not know whether Jones made use of a small outdoor recreation area where death row inmates are allowed to spend an hour outside their cells each day.

"The fact that he has been in extreme physical pain for a number of years affects his outlook on life," Rosenzweig said.

While the Parole Board has twice before considered bids to reduce his sentence, Jones has previously expressed his desire to see the death sentence carried out.

At his arraignment two days after Phillips' death, Jones told a White County judge, "Just go ahead and kill me. Just get it over with," according to Arkansas Democrat-Gazette archives.

Later Friday in Little Rock, members of the Phillips family told the Parole Board they also wanted to see Jones killed, more than two decades after he walked into the tax service where Mary Phillips was working alone with her daughter.

Phillips was strangled to death with the cord to a Mr. Coffee coffee pot, the case prosecutor recalled.

"I don't want to live another day knowing that he's alive," said Lacy Phillips Manor, the survivor of the attack. "I need that to happen, and it needs to happen the 24th like it's supposed to."

In addition to Mary Phillips' death in Bald Knob, Jones pleaded guilty to the unsolved 1991 killing of Lorraine Anne Barrett in a Fort Lauderdale, Fla., hotel. Jones' DNA was linked the case in 2003 while he was on death row.

He was given a life sentence in Florida before being sent back to his Arkansas prison.

According to Rosenzweig, and the letter he read, Jones applied for clemency so that he could participate "in solidarity" in a lawsuit filed by his death row peers challenging the expedited clemency process set up by the state to accommodate the approaching execution dates.

U.S. District Court Judge D. Price Marshall Jr. ruled Thursday that the clemency process was "beyond imperfect, it was shoddy," but declined to block the executions for most of the prisoners.

The judge said Jason McGehee, whom the Parole Board recommended be granted clemency, was entitled to more time to have his request reviewed. He delayed acting on Jones until the Parole Board announces a recommendation.

In his application to the Parole Board, Jones said he should be considered for clemency because of his remorse and because information about his mental health was not presented at his trial.

In his letter, Jones wrote that he taped a black and white photo of a battered Lacy Phillips inside his cell, with the caption "You did this." He looks at the photo often, he wrote.

Inside the Varner prison Friday, there was one voice requesting Jones' life be sparred.

His sister, Lynn Scott, taped a video from her home in North Carolina that was played on a TV inside the hearing room, set up in the barred visitation center of the maximum security prison.

Scott recalled her and Jones' childhood, which she said was visibly happy to outsiders, while marked by physical and sexual abuse inside the home. Jones began drinking and doing drugs to cope in his early teens, she said.

"From the very beginning, my brother has always been my protector," Scott said. "I just would like to have as many years as I can with him."

The Parole Board previously voted against Jones' bids for clemency in 2007 and 2010.