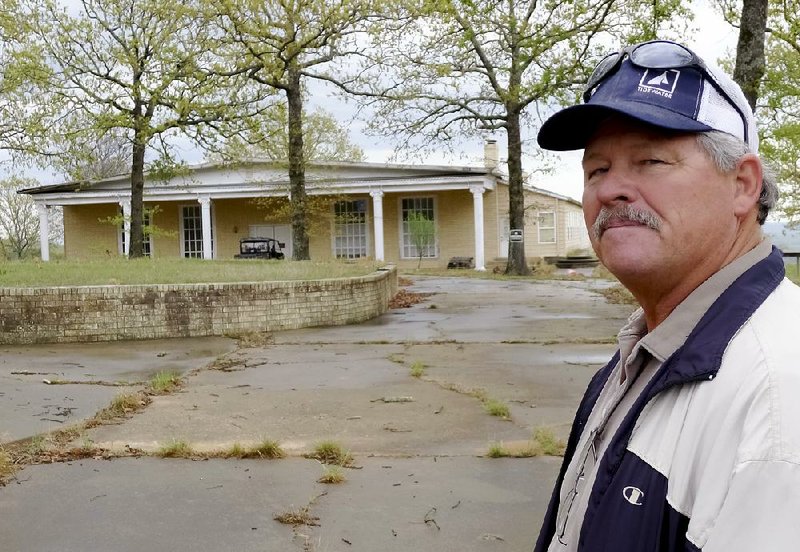 Mike Morrell stands outside the mansion built in the 1970s for evangelists Tony and Susan Alamo. Morrell said he would like to see the mansion fixed up and used as a foster home or perhaps a church ministry.

DYER -- Free to the right charity: mansion built for religious cult leader and his wife, whose embalmed body was kept inside the house for months while he waited for her to rise from the dead.

The two-story, 13,064- square-foot mansion built in the 1970s for evangelists Tony and Susan Alamo is in dire need of repairs, said Mike Morrell, who owns the property on Georgia Ridge north of Dyer in Crawford County.

The front rooms have been gutted, the roof leaks, and vandals have stolen copper wiring and plumbing pipes. Teenagers keep breaking in to take photos of themselves.

"They want to be cocky to their friends and say, 'I broke into the Alamo mansion,'" Morrell said. "It's kind of like the old spook house."

Morrell said 75 percent of the trespassers caught have been groups of girls. He plans to install an alarm system.

Built into a hillside, the house is unimposing from the front, but the appearance is deceiving.

"She could seat a hundred and something for dinner," said Shirley Lovett, 82, of Alma, who was a friend of Susan Alamo's. "That's the kind of dining room and kitchen facilities it had. It was all in beautiful taste."

There was even a recording studio in the basement.

Lovett said there were five tables and chair settings in the living room.

"Otherwise, you were hollering across the room," she said.

Now, the concrete floor, support beams and ductwork are visible in the cavernous front room.

Morrell said he would give the house away if someone would restore it.

"I would give it to any legitimate Christian charity as long as they can prove to me they have the money upfront, and they would devote the money to renovating it," he said.

Morrell wants something good to become of the place. He would like to see the mansion used as a foster home, which would probably require $500,000 in repairs. Or maybe as a church ministry.

To restore the building to its original condition could cost as much as $1.5 million, Morrell said.

Morrell said he could tear it down, but that would cost about $30,000 and just doesn't seem like the right thing to do.

"Right now, the building is still salvageable," he said.

The decaying mansion is in the middle of 190 acres owned by Mike and Brenda Morrell. It's within view of their two nightly rental houses, each of which has a $7,000 whirlpool spa on the deck. The Morrells have 53 monthly rental units on their property.

Last year, the Morrells started River Chase Weddings and Events on land adjoining the old Alamo compound. With sweeping vistas of the Arkansas River valley, the business offers four different venues for outdoor weddings. They held 15 weddings last year and hope to do 30 this year.

Several buildings were on the property, which is 16 miles northeast of Fort Smith. A building where Alamo devotees made sequined denim jackets for Hollywood stars is now an 18-unit apartment complex.

The Morrells bought contiguous property over the years.

They have never been affiliated with the Alamo ministry. The Morrells attend church in Van Buren. Both have made mission trips all over the world.

The Morrells have twice given the old Alamo mansion to nonprofit organizations that promised to restore it. Both nonprofits backed out -- one doing so after much of the first floor had been gutted to make room for a banquet hall.

"Two people who took it dropped it and left it worse than they found it," Mike Morrell said.

Susan Alamo died of cancer in 1982. For about six months, Tony Alamo refused to bury her, telling his followers that she would rise from the dead.

Lovett, who owns a flower shop, said Tony Alamo kept calling her to deliver flowers to the mansion while Susan Alamo's body was on display there.

"I saw Susie lying there in her wedding dress," Lovett said.

She said she talked Tony Alamo into having a funeral for Susan, but then he took the body right back to the mansion.

At some point, Susan Alamo was entombed in an above-ground mausoleum near the house and their heart-shaped swimming pool.

In 1991, just before federal agents seized the property, the front of the mausoleum was smashed, and Susan Alamo's body was spirited into the night as Tony Alamo and his followers abandoned the compound.

In 1998, the coffin and remains of Susan Alamo were dropped off one night outside a Van Buren funeral home after Christhiaon Coie, Susan Alamo's daughter, won a legal battle for the body.

"The casket was covered with hay," Lovett said. "Whenever he disappeared, he took her with him for a spell, but I think he knew if he was ever found, they would find her body. I think that's why he put her in a barn somewhere."

In August 1998, Susan Alamo's remains were placed in a crypt in Memorial Park Cemetery in Tulsa, according to the Tulsa World.

Tony Alamo, 82, whose real name is Bernie Lazar Hoffman, is serving a 175-year federal prison sentence after being found guilty in 2009 on 10 counts of taking young girls across state lines for sex. Some of them, as young as 8 years old, had been forced to become Alamo's "wives."

Tony Alamo had started a ministry in Los Angeles and later moved its headquarters to Arkansas, where Susan was raised.

Tony Alamo thought of himself as a country-gospel singer. In former President Bill Clinton's 2005 autobiography, My Life, he described Tony Alamo as "Roy Orbison on speed."

In the 1990s, Tony Alamo did prison time for tax evasion. After being released in 1998, he set up a compound in Fouke (Miller County).

Former Alamo followers claimed in a federal court filing that they had been brainwashed, imprisoned, forced to work long hours without pay, were routinely beaten, and starved as punishment for perceived wrongdoing.

With Alamo in prison after his 2009 conviction, the Morrells held a reunion for people who had grown up on the Dyer compound. About 60 people attended, including family members.

Rebecca Gay, 42, who now lives in Georgia, lived the first 14 years of her life at the compound near Dyer. She said the rules were strict and public beatings were common.

At the reunion, Gay couldn't make herself go back into the mansion. When she thought about it, she could almost hear the screams of children echoing in her head.

The mansion was where children were taken for mock trials in front of Tony Alamo, Gay said. Afterward, they were often beaten until they bled.

"That house was like a house of horrors," she said.

Gay said she was beaten twice in the mansion and was forced to watch other children be beaten.

A year after the reunion, while in Arkansas to attend a funeral, Gay and other former Alamo followers went in the mansion. She said there was a lot of crying that day.

At the reunion, everyone focused on the good times, and there was a lot of laughing, she said.

Someone asked the others if they remembered a man who would start to doze off during the prayer meetings.

"Then he would sputter 'burrrrr-ber-ber-ber-ber,' pretending he was speaking in tongues to stay awake," Gay said. "We laughed until we cried."

She said the reunion was a healing experience. It was specifically for "the kids of the cult," many of whom are around 40 years old now, Gay said.

"We couldn't believe how amazing it was to see each other," she said. "We didn't know it would be so fulfilling, incredible and healing. ... We didn't want to leave because there's something magnificent about being understood and loved."

"It was just closure for a lot of them," Mike Morrell said. "We know they've been hurt spiritually."

Dorothy Curry, 72, of Fort Smith, was one of the few adults who attended the reunion.

She has fond memories of her time living on Georgia Ridge, where she taught school, did sewing and attended prayer meetings in the mansion. Curry remembers taking students on field trips to Hot Springs, the Tulsa Zoo and the rodeo in Fort Smith.

"We had great times up there," Curry said. "Other than the cruelty that went on and the control and discipline from Tony, it was pretty great. It was Bible-based, but unfortunately the control they exercised over us made it cultish. A lot of people were wounded in that situation, and some people have never recovered from that."

Curry said the Morrells want to help with that recovery.

"What's in their heart is to help people heal," she said.

The Morrells are planning another reunion for sometime later this year. Gay said more people are likely to attend the next one.

Many people didn't go to the first reunion because they were afraid, Gay said. But now they've heard people enjoyed it.

Brenda Morrell said the first reunion helped erase the stigma from Georgia Ridge. It's something they'd been trying to do for years.

"It was good for us too because we had fought really, really hard to get the stigma of that off this property," she said.

There was a time when people weren't allowed onto the property, but that time is past, Brenda Morrell said.

The Morrells ask that visitors call ahead of time so they won't mistake them for selfie-taking mansion trespassers.

Gay said she is looking forward to the next reunion.

"I think love heals everything," she said. "The more love and healing I do for other people, the more it does for me."