Sheriff cut down in grocery gunfight 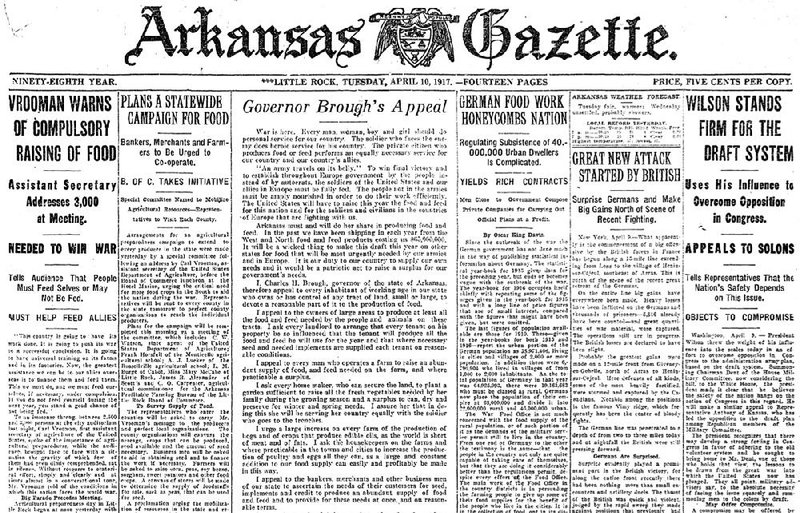 Front page of the April 10, 1917, Arkansas Gazette reflects the state's urgent response to April 6 the congressional declaration of war against Germany that propelled the nation into the Great War.

One hundred years ago this week, Assistant U.S. Agriculture Secretary Carl Vrooman was pounding on a table in Little Rock and telling the Arkansas Gazette that any Southern landowners who weren't willing to switch from cotton to food crops "are disloyal."

With the nation four days into an officially declared war, food would be needed by the nation's military and its allies. From Gov. Charles Brough and business leaders statewide came a plea for planting less cotton, more food.

The campaign was taken up by many forgotten civic leaders, including a Texarkana lumberman whose story has occupied Old News for the past two weeks.

On March 27, we looked at a small item from the March 27, 1917, Gazette about this guy's enthusiastic support of the war. Leo Krouse, who was Jewish and an immigrant from Hungary, very active in civic and charitable affairs and known far and wide for boosting regional industries, had offered the services of his big factory to support the nation. His factory made coffins.

April 3 we saw how, in 1921, a well-known Miller County farmer and stockman named Elisha F. "Lish" Barber stomped Krouse in the street in Texarkana. (Barber had been arrested once before for a street fight and in that account was described as "almost a giant.") We saw how Barber was arrested and charged with attempted murder. The charge was reduced to assault and battery, and the trial venue shifted from Texarkana to tiny Fouke.

And the next year, Barber was elected sheriff of Miller County.

Texarkana, Jan. 4 [1923] -- E.F. Barber, Miller county sheriff, who entered upon the duties of his office Monday, has announced that he proposes to make war on pistol toters, and that he will enforce the letter of the law against all such violators. He also declared that he will see to it that the number of deputies commissioned by any peace officer in the county, must be kept within the limited number provided by law. It is said that the practice heretofore has been frequently to issue many more such commissions than the law allows, and this practice the new sheriff says he will endeavor to correct. He has given orders to his deputies to take guns off all persons found carrying them unlawfully, and to arrest the offenders.

For two years Barber made the Little Rock newspaper occasionally in small items recounting his arrests of bootleggers. The items don't convey a sense of his personality until this one, in the April 16, 1925, Gazette:

Sheriff Didn't Have to Go Far to Find Culprit

Texarkana, April 15 -- Shortly after Sheriff Lish Barber had returned to his office from a visit to the Security Mortgage Company's office yesterday afternoon, he received a "distress call" from the mortgage company requesting him to aid in the recovery of a Ford car which had just been taken from in front of the office. The sheriff hastily telephoned a number of outlying districts asking that a close lookout be set for the thief and the car, and telephoned the Police Department.

He then went out to take spin in search of the lost car, but just as he was stepping into his own Ford his eye caught the license number which appeared to be identical with that given for the stolen one. Examination soon convinced the sheriff that he himself was the culprit. On leaving the mortgage company's office he had taken the wrong car.

The sheriff then called the Police Department again .... "Come and get me, I want to surrender," he told the police.

(Between you and me, even though I knew, intellectually, that a few old newspaper clippings are not enough evidence to justify the liking or disliking of a stranger who died a century ago, after reading that funny blurb, my image of Barber improved.)

The Oct. 30, 1925, "shooting affray" in which Barber was killed was big news. The Gazette reported on the case from October through December, often on page one.

Barber and Deputy Sheriff Bob Smith went to a meat and grocery shop in College Hill, a suburb of Texarkana, at the behest of its co-owner Virgil Grigson, who was Garland township constable. Grigson had quarrelled with his partner, Henry Adams, a former police chief of Texarkana, and Adams' two sons.

Adams went to prison for life in Smith's death. He was tried three times and convicted of first-degree murder twice (the first conviction was overturned by the Arkansas Supreme Court). He admitted killing Barber but claimed self-defense, and in June 1928, that murder charge was dropped.

From records of a (second) appeal of Adams' sentence found at bit.ly/2o6Sira, we can learn that Adams and Grigson had been drinking the day of the affray. Adams and his sons took away a big pistol that Grigson had borrowed from another man. Grigson also kept a Winchester rifle in the shop, and Adams had a knife.

Wanting the pistol back, Grigson called the sheriff. Barber would die on the scene, Smith in a hospital the next day.

The account in the record of Adams' appeal includes wonderfully colorful quotes we can't print in the newspaper, so sorry. But a young woman who lived near the store, Ruth Shumaker, saw Barber get out of his car, and he spoke to her and smiled. The gunfire began soon after the sheriffs entered the shop.

Shumaker testified that she was looking for a gas connection under the front of her house when she heard the first shot, looked up and saw Barber in the middle of the street. She saw Adams shoot. Barber grabbed his chest with one hand, turned to cross the street and fell. (Smith's death was more awful, but we're talking about Barber.)

Here's the Gazette, reporting from Texarkana on events of Nov. 1, 1925:

The funeral of Sheriff Barber, which was held at the First Methodist church this afternoon, was one of the largest ever held here. Fifteen hundred men and women crowded into the church while about 1,000 others stood on the lawn outside while the service was in progress. Hundreds of automobiles followed the body to the cemetery at Rondo, five miles from town.

Dr. J. Hamlins, in his talk at the church, eulogized the late sheriff as a faithful and fearless officer who, with his chief deputy, Bob Smith, was slain in the line of duty. He declared that their deaths should awaken the good citizens to a realization of their duty, and said that if such an awakening has been accomplished, the officers "will not have died in vain."

Although we've now spent three Mondays with the rough old days in Miller County, I simply cannot leave this story without trying to tell you about one more character -- the extraordinary woman who was married to Lish Barber.

Next week: Slain Sheriff's Widow Is Carrying On in His Place