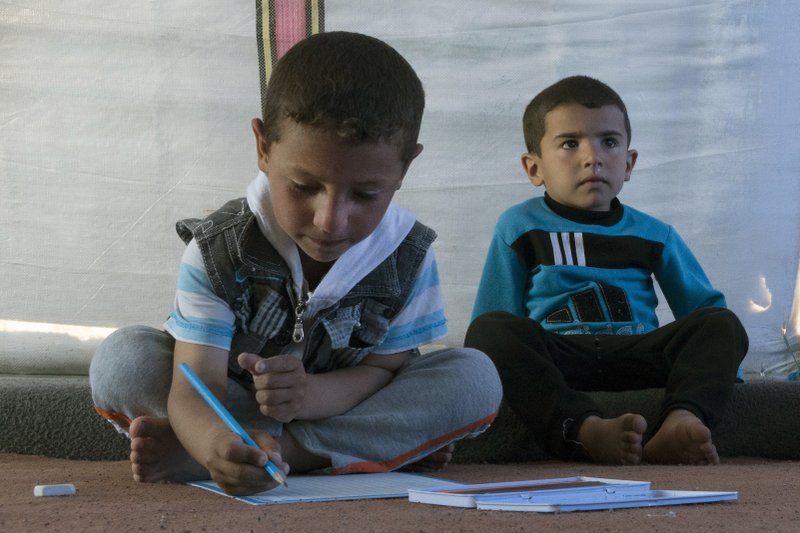 KHAZER, Iraq -- Six-year-old Mustafa suffers nightmares, cries at the sound of airplanes and occasionally wets himself, symptoms that worsened last year when an explosion in Mosul killed his cousin and wounded his father before his eyes.

He was a young witness to more than two years of Islamic State rule and months of heavy fighting aimed at driving the extremists from Iraq's second-largest city. Like countless Iraqis, he shows symptoms of post-traumatic stress disorder an epidemic borne of years of war that is overwhelming the country's limited mental health services.

"He wants me to always stay with him. He is afraid, he is scared of loud noises. Even when the children speak loudly he becomes scared," Intisar Jadan Sultan, Mustafa's mother, said at the Khazer camp for displaced people.

"Even when we arrived at the camp, he thought the fighting was still going on. He didn't understand that everything was over. He doesn't sleep well, he cannot relax, he screams and cries until I take him in my arms."

Sultan said Mustafa's problems started when the family had to flee Zumar, their hometown, three years ago, but worsened considerably when the fighting started in Mosul last November.

Mental health professionals say many displaced Mosul residents experience nightmares, anxiety, depression, aggression and irritability, all signs of PTSD, a condition that may develop as a result of exposure to serious violence.

"The rate of the population in Mosul that has been affected during this war, it must be double than in other wars," said Dr. Karzan Jalal Shah, director of the Irbil Psychiatric Hospital. "As a result of living under [Islamic State] rule for two years, not only the war, but the killings, beheadings, cutting off of hands in front of people, everyone will have some kind of psychological symptoms."

The hospital receives about five patients from Mosul every day, and there is little it can do beyond referring them to private organizations. The hospital has only seven psychiatrists, who receive only a quarter of their salary and little medication because of the severe financial crisis affecting the Kurdish regional government.

As a result, waiting lists are long and they can dedicate only a few minutes to each patient, many of whom never turn up again because they cannot afford to regularly travel.

"People come until they feel better, but it takes time to treat these cases," Shah said.

Aid organizations provide some care in the camps. Doctors Without Borders has a psychiatrist in Khazer camp four times a week and a psychosocial counselor every day, while the International Organization for Migration runs a reintegration and socialization program for children.

Mustafa sees the psychiatrist regularly, and attending kindergarten has helped. He plays with the other kids and is visibly happy in their company. His mother says he is steadily improving, but she still needs to stay with him all morning to calm him.

Because of the sensitivity of the subject, numbers are difficult to come by.