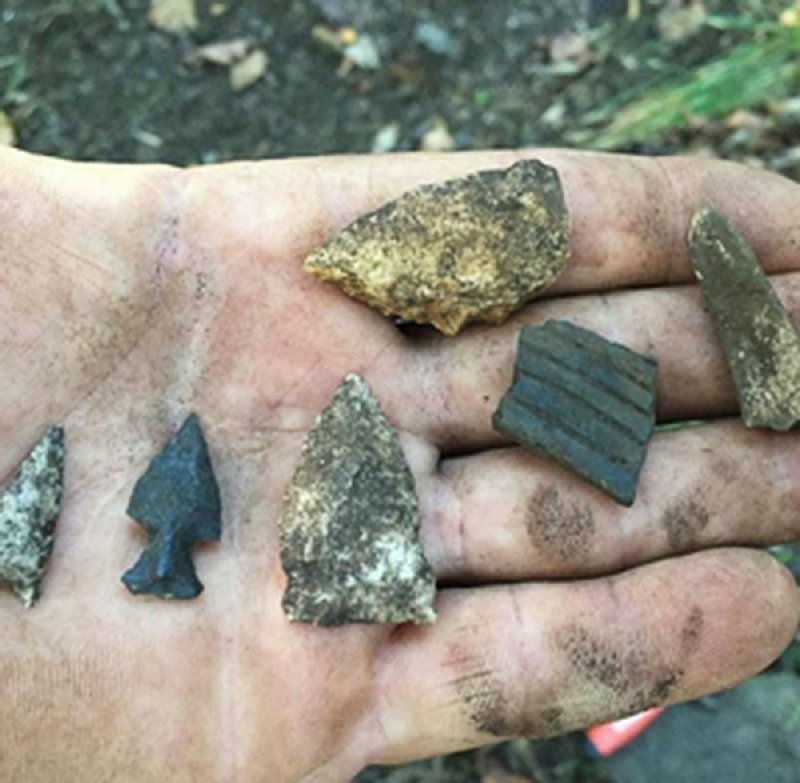 A photograph of artifacts from David Tudor’s Instagram page. Federal agents monitored Tudor through social media and hidden cameras after he posted photos online of artifacts he apparently had removed from the Ozark-St. Francis National Forest.

Federal agents used hidden cameras to monitor David Tudor, 59, of Natural Dam for four months in 2015 while he dug for arrowheads and other artifacts in the national forest near his home, according to court documents.

They seized 2,831 artifacts from Tudor's residence, according to a Nov. 16 grand jury indictment. He must forfeit those artifacts to the government, according to a plea agreement filed Wednesday in federal court in Fort Smith.

Tudor could get a maximum sentence of one year in prison and a $100,000 fine, according to the plea agreement. He agreed to pay the U.S. Forest Service $12,471 in restitution. Tudor has yet to be sentenced. 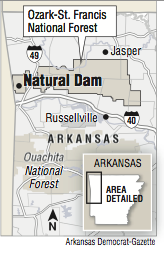 A map showing the location of the Ozark-St. Francis National Forest near Natural Dam.

Federal agents learned of the thefts when they received an anonymous email about Tudor posting photos of his finds online, according to court documents. Tudor posted pictures of arrowheads and other artifacts on his Instagram page, where he goes by "dirt0310."

"Comments the defendant posted on the lnstagram account implied he often rode on horseback to various bluff shelters and caves in the Ozark Mountains to collect prehistoric artifacts," according to the plea agreement. "There were extensive photographs depicting bluff shelters (many of a hand holding artifacts with the bluff shelter in the background), and at least one post contained a comment that he was 'addicted' to this activity."

The camera surveillance began on June 3, 2015, and continued through mid-October of that year, according to an affidavit for a search warrant filed Nov. 6, 2015, in U.S. District Court in Fort Smith by Morgan Amos, a criminal investigator with the U.S. Forest Service.

Investigators moved the surveillance cameras from one location to another to correspond with Tudor's posts on Instagram.

"Tudor has been posting apparently new artifact finds most every week on his Instagram site during the scope of my investigation," Amos wrote in the affidavit.

Duane Crims, a law enforcement officer with the Forest Service, reported finding arrowheads, bone fragments and pieces of ceramic pots among the artifacts at Tudor's residence.

On May 31, 2015, Crims and other investigators located Tudor's "favorite" digging site -- as posted on Instagram -- in the Whitzen Hollow area of the national forest, according to the affidavit. There, investigators said, they found evidence of unauthorized digging.

"The site is a concave bluff shelter and a known prehistorical archaeological site," the affidavit said.

The next day, investigators found two more locations where digging had taken place nearby on federal land.

Still-photo and video-surveillance cameras were installed at the digging sites. The cameras documented Tudor digging for artifacts, according to the affidavit.

Three main sites were listed in the affidavit, but digging had occurred in several spots within those sites -- often at the back of the shelters, where prehistoric fires had burned, or underneath overhanging rocks where water dripped, which archaeologists call a drip line.

At one point, Tudor was recorded digging in a waist-deep hole on federal land, according to the affidavit.

There were no permits issued for excavation in the Boston Mountain Ranger District, and cave entry is forbidden because of the possible human transference of white-nose syndrome from bat colonies, Amos wrote.

Permits to excavate prehistoric sites in the national forest are only granted to people with professional archaeological credentials who have submitted an artifact curation plan, according to the affidavit.