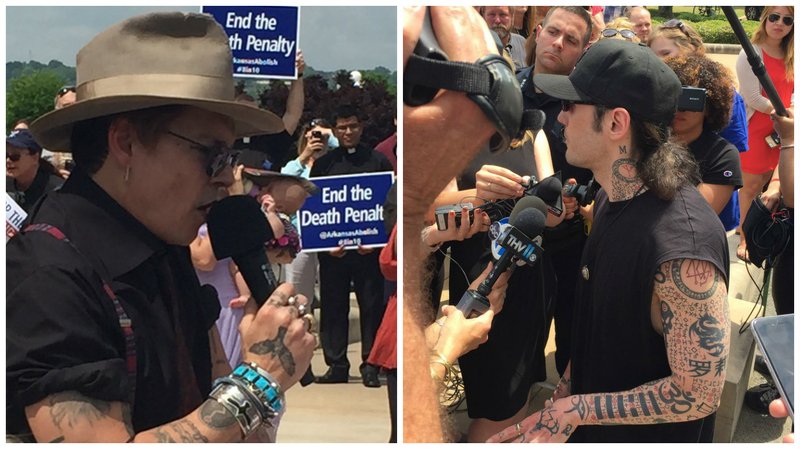 Actor Johnny Depp (left) and Damien Echols (right), who spent nearly 18 years on Arkansas' death row before being freed, appear at an anti-execution rally Friday, April 14, 2017, on the steps of the state Capitol in Little Rock.

A freed death row inmate returned to the state he still has “nightmares” about to advocate against the executions of seven condemned men set to begin next week.

Damien Echols, who spent more than 18 years on Arkansas’ death row, stood on state Capitol steps to criticize what he called the “conveyor belt of killing” that Arkansas put in motion earlier this year. Seven inmates are scheduled to be executed over 11 days starting Monday.

Echols and two others became known collectively as the West Memphis Three after they were tried and convicted in the 1993 murders of three boys. After new DNA evidence in the case, the three men were eventually released after accepting a rare plea deal.

Dressed in black, Echols faced hundreds gathered for a rally hosted by the Arkansas chapter of the ACLU and the Arkansas Coalition to Abolish the Death Penalty. While Echols readied himself to speak, his wife, a couple close friends and actor Johnny Depp stood behind him with their arms linked.

Echols, who lives in New York, first told the crowd he hadn’t wanted to come back to Arkansas.

But when he heard about the executions, Echols said he “wouldn’t be able to live with myself” if he didn’t do something, even if his efforts were futile.

Echols described his relationships with the condemned men during his almost two decades on death row. One man has the intellect of a child, he said. Another believes his execution is a test from God to prepare him for a mission, Echols said.

Though some of the men committed the crimes for which they were convicted, Echols said he got to know them in a different light.

“These are the people who showed me more kindness, compassion and generosity than any of the good people trying to kill them ever did,” Echols said.

He then introduced Depp as his “brother” who is one of the people responsible for saving his life. The crowd strained to hear as Depp, one of Echols’ longtime celebrity supporters, spoke softly into the microphone, saying the option of death was “dangling” over Echols’ head for years while he sat in prison.

“I just don’t believe that that possibility should ever, ever, ever happen again,” Depp said.