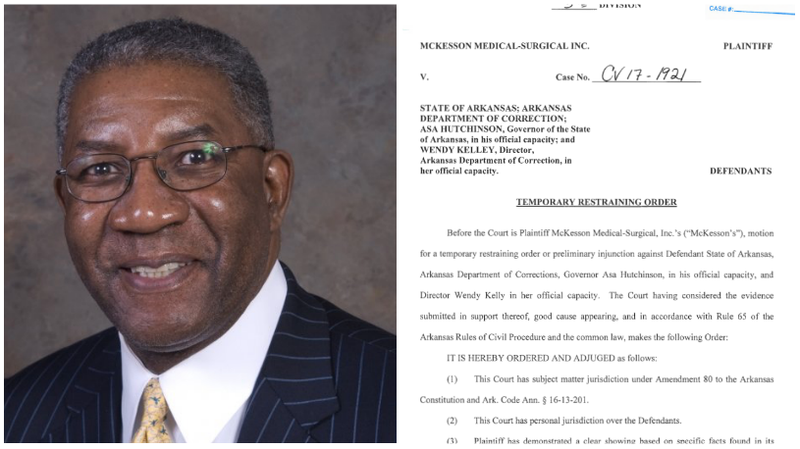 A Pulaski County circuit judge has issued a temporary restraining order barring the state from executing condemned inmates it had planned to put to death beginning Monday.

The state Attorney General's office said it would immediately seek to have the order overturned by Arkansas' high court.

Judge Wendell Griffen's order came after the Arkansas Supreme Court issued an emergency stay blocking the execution of Bruce Ward, who was scheduled to be put to death Monday.

Under Arkansas' protocol, midazolam is used to sedate the inmate, vecuronium bromide then stops the inmate's breathing and potassium chloride stops the heart.

[IN-DEPTH: A look at the condemned inmates whose executions were scheduled for this month]

Medical supplier McKesson sold the state vecuronium bromide. In a statement Thursday night, McKesson said it complained to the state after learning that Arkansas planned to use the drug for lethal injections. The state said it would return the drug, McKesson said, and the company issued a refund, but the drug was never returned.

McKesson said it was considering "all possible means" to get the drug back and on Friday filed a complaint in Pulaski County. Click here to read the full complaint 📄 .

Griffen about half an hour after the complaint was filed issued the restraining order.

The order informs the state that it "shall not use the vercuronium bromide obtained from [McKesson] until ordered otherwise by this Court."

“As a public opponent of capital punishment, Judge Griffen should have recused himself from this case," Deere said. "Attorney General Rutledge intends to file an emergency request with the Arkansas Supreme Court to vacate the order as soon as possible.”