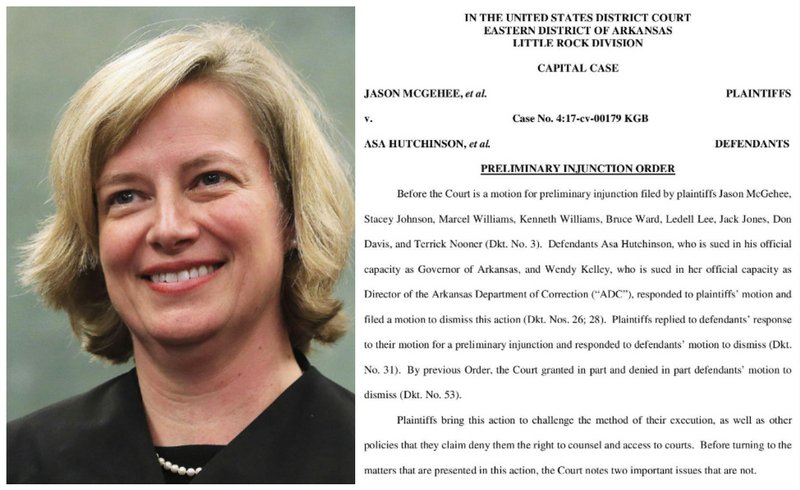 A federal judge issued an injunction early Saturday to halt the executions of several condemned Arkansas inmates, creating another barrier to the state's plan to put them to death over an 11-day period starting Monday.

The Arkansas Attorney General's office called the decision "unfortunate" and filed a notice of appeal with the 8th U.S. Circuit Court of Appeals.

The ruling came a day after the Arkansas Supreme Court first issued an emergency stay blocking Bruce Ward's execution. That order didn't affect the other 6 condemned men, but Pulaski County Circuit Judge Wendell Griffen ruled a short time later that a separate complaint filed by a medical supplier was cause to issue a temporary restraining order blocking all the executions.

Baker wrote that "there is a significant possibility that plaintiffs will succeed on the merits of their Eighth Amendment challenge to Arkansas’s lethal injection protocol."

"The state of Arkansas does not intend to torture plaintiffs to death," Baker wrote. "However, the Eighth Amendment’s prohibition of cruel and unusual punishment is not limited to inherently barbaric punishments. A condemned prisoner can successfully challenge the method of his or her execution by showing that the state’s method 'creates a demonstrated risk of severe pain' and 'the risk is substantial when compared to the known and available alternatives.'"

Judd Deere, a spokesman for Attorney General Leslie Rutledge, criticized Baker's decision and said earlier Saturday that Rutledge planned to "immediately" appeal to seek a lift of the injunction. Online records show a notice of appeal was filed just before 10:45 a.m.

“It is unfortunate that a U.S. District Judge has chosen to side with the convicted prisoners in one of their many last-minute attempts to delay justice," Deere said in an emailed statement. "This decision is significantly out of step with precedent from the Eighth Circuit and the U.S. Supreme Court."

Gov. Asa Hutchinson said he planned to meet with Rutledge and prisons officials on Monday. In a statement, he said the legal challenges were expected.

"When I set the eight execution dates in accordance with the law and my responsibilities, I was fully aware that the actions would trigger both the individual clemency hearings and separate court reviews on varying claims by the death row inmates," Hutchinson said. "I understand how difficult this is on the victims' families, and my heart goes out to them as they once again deal with the continued court review; however, the last minute court reviews are all part of the difficult process of death penalty cases."

Baker issued the ruling after presiding over a four-day trial on a case filed by the seven men. They were set to be executed two at a time between Monday and April 27, with lethal injections scheduled on consecutive Mondays and Thursdays.

Eight inmates were originally set to be killed, though a federal judge earlier granted one of them a reprieve.

The inmates’ attorneys sought to temporarily block the executions, arguing that the compressed schedule increases the likelihood of potentially harmful mistakes. The quick pace also prevented the men from preparing an adequate defense, which violates their federal due-process rights, the lawyers argued.

In the ruling, Baker noted the Arkansas residents and politicians have long shown support for capital punishment.

"It is their right to decide whether the death penalty should be a form of punishment in Arkansas, not the Court’s," she wrote, saying the victims' families "have waited decades to receive some closure for their pain."

"By this Order, that day is delayed yet again," Baker added. "These thoughts weigh heavily on the Court, but the Court has a responsibility to uphold the Constitution."

In addition to appealing Baker's ruling, the state Attorney General on Saturday also asked the Arkansas Supreme Court to reverse Griffen and to remove him from the case.

But later Saturday, McKesson, the medical supplier whose complaint prompted Griffen's order, cited Baker's injunction in asking for its complaint to be dismissed. It said Baker's order left "no need" for the restraining order Griffen issued.

Baker's ruling came a day after a public protest against the death penalty at the Arkansas Capitol. That rally drew hundreds of capital-punishment opponents, including actor Johnny Depp and former Arkansas death-row inmate Damien Echols. Echols, a member of the so-called West Memphis Three, served 18 years in prison before being released in 2011 in a rare legal maneuver in which he and his two co-defendants pleaded guilty to the killings of three Arkansas boys while maintaining their innocence. An effort to get a new trial for the men was working its way through the courts at the time.

Click here for photos from the rally at the Capitol 📸.

Arkansas has not executed an inmate since 2005 due to both legal challenges and difficulty in maintaining a drug supply. Hutchinson set the 11-day schedule as the expiration of one of the drugs in the state’s three-drug lethal cocktail neared. Midazolam, set to expire at the end of April, is an anesthetic given before the injection of fatal drugs.

In March, Arkansas obtained its needed supply of another drug, potassium chloride, which stops the heart. Vecuronium bromide, the third drug, is a paralytic.

On Thursday evening, two pharmaceutical companies filed a brief asking Baker to stop Arkansas from using their drugs in the planned executions. Fresenius Kabi USA and West-Ward Pharmaceuticals Corp. said in the filing they believe the state’s Department of Correction bypassed controls on how the drugs are distributed, the Arkansas Democrat-Gazette reported.

Neither company’s spokesman said how or when the manufacturers learned that the state may have obtained their products.

Baker told the courtroom shortly before 5 p.m. that an outside party had requested permission to file a friend-of-the-court brief. She told attorneys she would read the brief before issuing her ruling, and neither side objected.