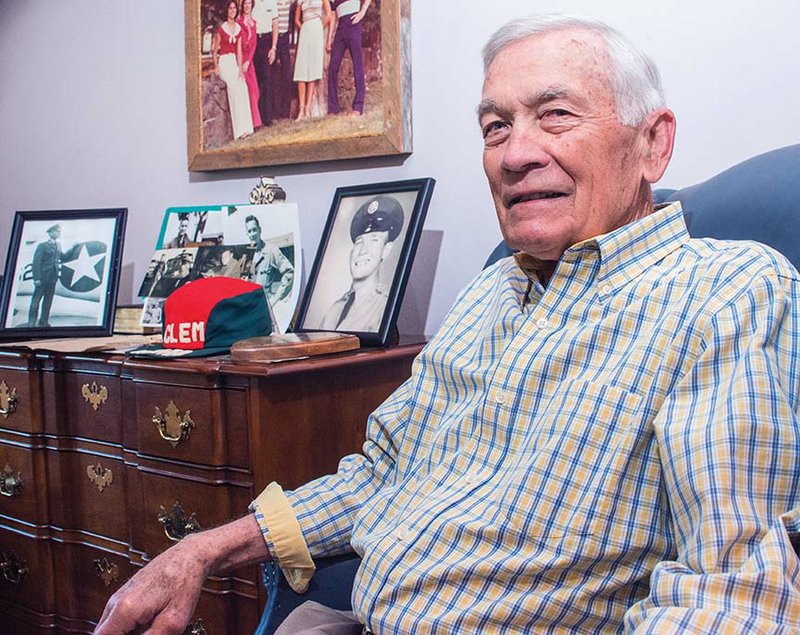 Clement Frank “Clem” Kordsmeier of Conway recalls his experiences in the Air Force during the Korean War. He served near the end of the war, refueling aircraft on the K-55 airfield in South Korea. He completed his four years of service at Carswell Air Base in Fort Worth, Texas. Kordsmeier recently shared his story as part of the Library of Congress Veterans History Project.

CONWAY — Clement Frank “Clem” Kordsmeier had never even been out of Arkansas, let alone the United States, when he enlisted in the Air Force in 1952. That would all change, as he would soon be shipped off to Korea.

Kordsmeier, 85, recently shared stories of his military service in Korea and the United States as a participant in the Library of Congress Veterans History Project.

Sitting comfortably in the living room of his home in Conway, Kordsmeier answered questions posed by Marlee Bird of Lawrence,

Kansas, as she taped and videoed the interview. Bird is a 19-year-old sophomore at Hendrix College serving an internship in the Little Rock office of U.S. Sen. John Boozman, R-Ark., who is a proponent of the Veterans History Project. Retired Army Col. Anita Deason of Conway also visited with Kordsmeier. Deason is a military and Veterans Affairs

liaison for Boozman’s office and has conducted many interviews herself for the Veterans History Project.

In a prepared statement, Boozman said, “The Veterans History Project is a unique collection of the memories of our veterans. These firsthand accounts add valuable information and insights to the permanent record from which future generations will learn.

“I’m proud of the work my office does to promote this program across the state and the veterans’ stories we’ve been able to preserve. I’m pleased to see the enthusiasm across Arkansas to join our efforts and honor the histories of our veterans.”

Deason said, “Years ago, when I first met Mr. Kordsmeier, I instantly knew he had served in the military, simply by the distinguished way he carries himself. Often called ‘The Forgotten War’ because the U.S. involvement came shortly after World War II, involved a smaller amount of troops and there was no ending, no fanfare when they came home, etc., this war is often [basically] overlooked, but shouldn’t be, nor should those who served.

“I appreciate Mr. Kordsmeier sharing his experience. This helps to remind us of this period in our nation’s history and to remember, honor and respect those who served.”

Born Dec. 16, 1931, in Morrilton, Kordsmeier is one of 11 children born to Louis G. Kordsmeier Sr. and Mary G. Yanker Kordsmeier, who lived near Overcup Lake for many years. Four of Clem Kordsmeier’s siblings are deceased — Hubert Kordsmeier; Mildred Stroud; Sister Elizabeth Kordsmeier, who was a member of the School Sisters of Notre Dame; and Rita Muller.

Clem Kordsmeier graduated from Sacred Heart Catholic School in Morrilton in 1949 and enlisted in the Air Force in 1952.

“Before I joined, I helped Dad on the farm. I was afraid I would get drafted by the Army,” he said.

“I had already received two deferments and was afraid I wouldn’t get another one. I knew the Army was going to draft me, and I didn’t want to end up getting killed like so many did on Pork Chop Hill,” he said.

“So I joined the Air Force in 1952. I signed up for four years,” Kordsmeier said.

“I was sent to Korea. They sent me there immediately after I finished specialist training. I was a petroleum specialist. I took care of refueling the aircraft. I was in Korea for one year.”

After his year in Korea, he returned to the United States and completed his four-year commitment at Carswell Air Force Base in Forth Worth, Texas, where he was honorably discharged as a staff sergeant on Dec. 4, 1956.

“When I joined, I told my mother I would not become a pilot,” Kordsmeier said. “She didn’t even want me to join the Air Force. My oldest brother, Hubert, was killed during World War II.”

Hubert Kordsmeier, an Air Force lieutenant and B-29 pilot, was 25 when he was killed in action March 10, 1945, when his bomber crashed into Fubo Mountain in Miyagi, Japan, in bad weather conditions while on a mission to Tokyo. All of the crew members aboard were killed.

Clem Kordsmeier said he had never been away from home until he joined the Air Force.

“It was the first time I had ever been outside the state of Arkansas,” he said, smiling. “I arrived at Lackland Air Force Base [in San Antonio, Texas], and was shocked at the quality of the barracks. It was quite different from my home life.

“I had to learn the rules and regulations of the Air Force,” Kordsmeier said, laughing.

Kordsmeier finished his basic training, then completed training as a petroleum specialist. He managed to get a 10-day leave before being shipped overseas so he could come home and marry his high school sweetheart, the former Florence Dussex of Morrilton. They were married in June 1953 at St. Joseph Catholic Church in Conway. Florence Kordsmeier died in 1992.

Shortly after his marriage, he was shipped out of the United States on the USS Mitchell, along with 5,000 other troops.

“We had no idea where we were going,” Kordsmeier said. “We were just a bunch of kids.”

He ended up near the village of Osan in South Korea, near the K-55 airfield that was built by the United States military. His job was to refuel airplanes.

Although he did not see action himself, he said he and others stationed at the airfield “always feared” possible “Midnight Charley” bombings by the North Koreans.

“Letters from my sweetheart and my parents kept me going. I’m glad we were there,” Kordsmeier said of the United States’ involvement in South Korea.

“We were protecting them from North Korea. We came back on the USS O’Hara to

Seattle, Washington. The ship had a 700-passenger capacity. It took us 27 days to get back home with stops outside Yokohama, Japan, and at the Aleutian Islands,” he said.

“I was seasick and so ready to get back. I got the last ticket that would get me somewhere near Little Rock. I felt there was an angel looking after me, telling me, ‘Clem, this is your ticket,’” Kordsmeier said.

“After the war, we came to Conway, which was my wife’s home. I knew I had to find a job of some kind. I had no qualifications. All I had done was farm and serve in the Air Force,”

“I decided I would just take anything. I applied at several places, and one said ‘yes’ — A.J. Hambuchen. He said, ‘Yes, I think we could put you on,’” Kordsmeier said.

“I did a little bit of everything for Hambuchen Home Furnishings. At that time, they handled everything — plumbing, tires, radios, electric skillets, mixers, all kinds of stuff. Then I became a salesman,” he said.

“I worked with three generations of the Hambuchen family — A.J. Sr., A.J. Jr. and David. They were all my bosses. The store is now called H3 Home and Decor,” Kordsmeier said.

• Son David Kordsmeier and his wife, Melinda, live in Conway and have four children — Kristen and her husband, Michael Uffenbeck of Weare, New Hampshire; Charles

Joseph “C.J.” Kordsmeier of Conway; Clark Kordsmeier of Edmond, Oklahoma, who has three children, Nathan, Karoline and Jaxon; and Luke Kordsmeier and his wife, Brooke, who live in Conway.

• Daughter Donna Sell and her husband, Bill, live in Orlando,

Florida, and have two children — Catherine Boswell and her husband, Robby, who live in Auburn, Alabama, and Matthew Sell, who lives in Orlando.

• Daughter Elaine Raby and her husband, Steven, live in Jacksonville, Florida, and have four children — Chris Kane and his wife, Chelsea, of Little Rock;

“I have never regretted joining the Air Force. It was a lifelong lesson for me,” Clem Kordsmeier said.

“I’ve tried to be a good person, … a good parent and husband. I’m a happy guy. My military experience taught me that if you were expected to do something, you did it,” he said.

“If you didn’t do what you were supposed to do, and your sergeant was standing there looking at you and asked you what was your excuse, you said, ‘No excuse, sir,’”

“I learned something about my country during that time,” he said. “You have to defend your country.”

Faith is very important to Kordsmeier.

“I am a Catholic,” he said. “Very much Catholic. I was born Catholic, as was my wife. We do believe and can recite the Apostle’s Creed at any time. We believe in doing the right thing and try to follow the Ten Commandments.”

Kordsmeier attends St. Joseph Catholic Church, where he is a volunteer Eucharist minister and ushers at several masses each month. He is also a 4th degree member of the local Knights of Columbus organization and serves on its honor guard at funerals and other ceremonies.

“I am honored to be a part of the Veterans History Project,” Kordsmeier said. “I hope to be able to take a look at this video some day.”