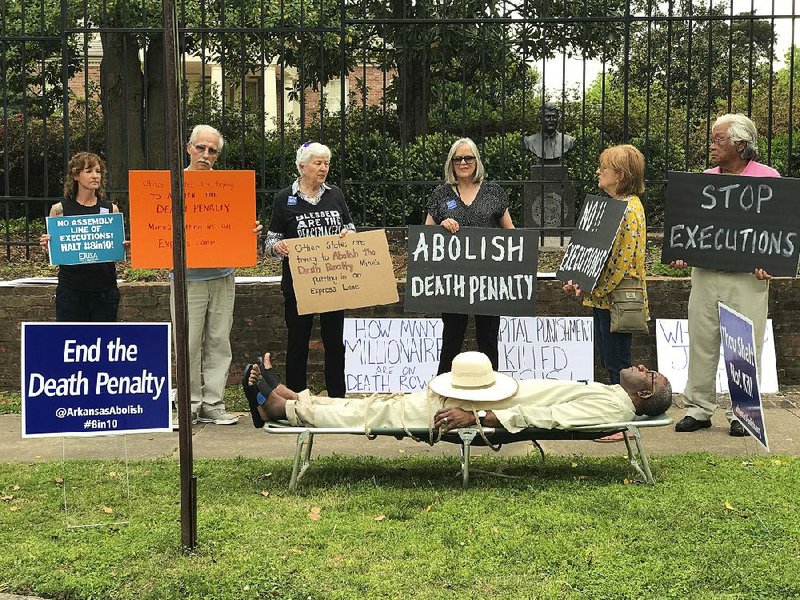 Pulaski County Circuit Judge Wendell Griffen lies on a cot outside the Governor’s Mansion during a protest against the death penalty Friday. Griffen, who issued a restraining order Friday in a lawsuit by the maker of one of the lethal drugs that would be used in the execution of Arkansas inmates, has come under heavy criticism from death-penalty proponents for taking part in the protest.

The Arkansas Supreme Court has removed a judge who participated in a death-penalty protest from hearing capital punishment cases.

In an assignment order issued Monday, the state's high court said it was necessary to reassign Judge Wendell Griffen's cases and to refer him to the Judicial Discipline and Disability Commission to determine whether he violated judicial conduct rules.

After a medical supplier filed a complaint Friday, Griffen issued a temporary restraining order barring the state from executing condemned inmates it had planned to put to death beginning Monday. Also Friday, Griffen participated in a protest outside the Arkansas governor's mansion where he lay on a cot to mimic a condemned prisoner.

"To protect the integrity of the judicial system this court has a duty to ensure that all are given a fair and impartial tribunal," the order from the Supreme Court said. "We find it necessary to immediately reassign all cases in the Fifth Division that involve the death penalty or the state's execution protocol, whether civil or criminal."