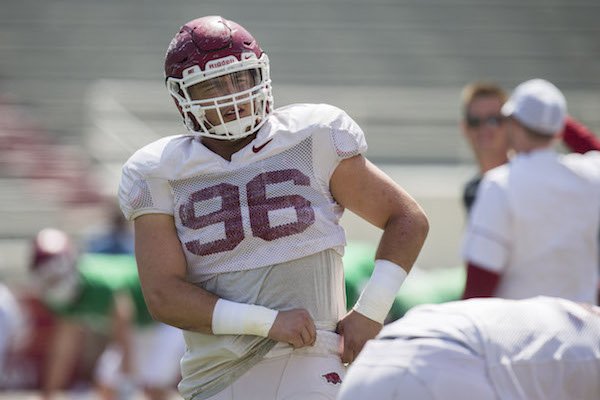 The first-year defensive coordinator for the University of Arkansas, Fayetteville said two days before the team's second scrimmage of spring drills that his unit was eager to start showing the additional calls and blitzes they had been practicing in their new 3-4 scheme.

"The next two weeks, we're really going to enjoy ourselves as we start to experiment with some pressure and what we can do there," Rhoads said last Thursday.

The Razorbacks notched 12 "vicinity" sacks and had a pair of takeaways during Saturday's 138-play scrimmage. Arkansas tackled better and held the Hogs' potent running game in check much better than in the first scrimmage, when the top five backs combined for 480 rushing yards.

Even though there was still no cut tackling allowed, the Razorbacks showed considerable progress with fewer missed tackles and tighter alignment and assignment work.

The addition of blitzing, usually with one or two players on top of the the three defensive linemen, added a couple of extra layers to what has been a gradual rebuild for the defense.

"The quarterbacks knew today [they'd get] some double-edged pressures, which means you're going to have to throw the ball hot," Coach Bret Bielema said Saturday. "The nice thing about the 3-4 is you really don't know where they're coming from or how they're coming."

Bielema and Rhoads said they knew the implementation of a fresh defensive scheme was not going to happen in a matter of days.

The Razorbacks' overhaul to the 3-4 front, after running a base four-man front most of the past four seasons, has been a step-by-step process through the first nine practices of spring drills.

The departure of defensive coordinator Robb Smith gave Arkansas a chance to change up terminology while also developing a new defensive identity.

Instead of going heavy on a big chunk of the playbook, then discarding or diminishing elements that were not productive -- as some coordinators do -- Bielema and Rhoads went with a methodical approach. The Razorbacks had just a couple of calls the first week, then began adding dimension to the new schemes, which were put in place with the ultimate goal of being a stouter run-stop team.

Arkansas' defensive linemen have talked about having more freedom in the new defense.

"I feel it gives us a lot more range to be players," sophomore nose guard Austin Capps said.

"I really don't have to worry about getting reads like I did last year," senior nose guard Bijhon Jackson said. "It will be easier to come off and make some plays, I believe.

"Just the way we played last year, I felt I was worried about so many things. Just getting reads and stuff like that, I don't have to worry about who is going to help me. Be free and just worry about playing ball."

"We got multiple guys in," he said. "You saw some guys roll through with the ones [first-teamers]. Inside, Austin Capps and Bijhon really, in my opinion, took a big jump today. I know nose guards don't stand out to everybody, but I saw them do some things."

The ends -- where sophomore McTelvin Agim and junior Armon Watts are starting -- and outside linebackers like Randy Ramsey, Karl Roesler and Michael Taylor will frequently be responsible for holding the edge of the defense, which became a recurring issue for last year's team, which was last in the FBS with a school-record 39 rushing touchdowns allowed and third-to-last with 5.91 yards allowed per carry.

"At the one end spot we have Sosa, who has a lot of talent, and behind him Briston, two guys who both can bring some nice things," Bielema said. "At the other end spot, really have a mixed bag between Armon Watts, who is playing good football ... and is a guy who is coming along, T.J. Smith and Jake Hall has done some nice things. It's fun to watch that group grow."

The new 3-4 look has changed the calls but hasn't made a drastic difference with the cornerbacks or inside linebackers.

"For the inside guys, you might think it's a whole lot different, but really it's not," inside linebackers coach Vernon Hargreaves said. "I mean, there's some things that are very similar to what we were doing before.

"We're using a lot of the same techniques and things like that. The fundamental part of things doesn't change. A little bit of scheme stuff here and there, but other than that, fundamentally it's the same stuff."

The free safety, which has been Josh Liddell rotating with De'Andre Coley and Santos Ramirez, has a different role in the 3-4.

"I'm playing more of a centerfielder in the 3-4," Liddell said earlier in the spring. "I'm more in the middle so I can help on both sides. It's just different."

Rhoads said the key to the switch to the 3-4 has been maximizing the talent on Arkansas' roster.

"The playbook is built around our personnel capabilities," Rhoads said. "Quite honestly, it's been fun to see that."