Lawyers argue that Arkansas inmate too obese to be executed; judge cancels hearing 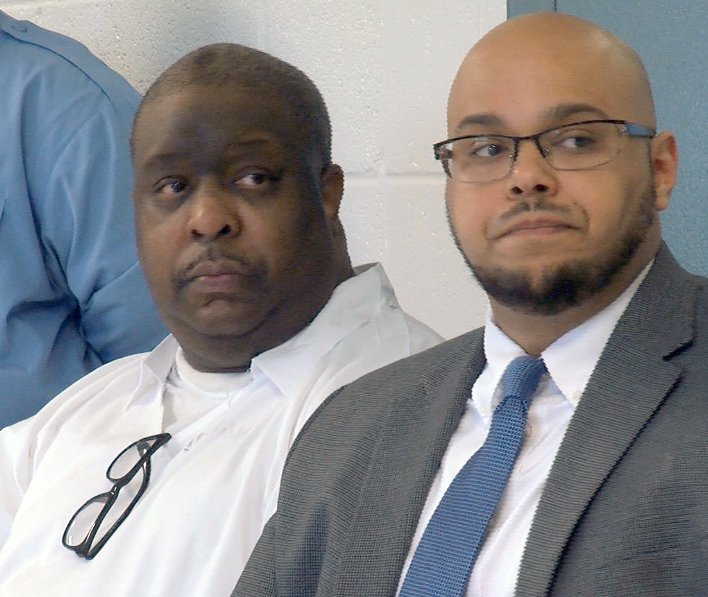 Marcel Williams (left) and his attorney Jason Kearney are shown in this file photo.

A federal judge has canceled a hearing in which an Arkansas death-row inmates' lawyers planned to argue that his scheduled lethal injection would either cause a painful death or fail to kill him, according to court filing.

U.S. District Judge Kristine Baker canceled the hearing that was set to take place in her courtroom at 1 p.m. Tuesday, according to the court docket.

Lawyers argue that Arkansas inmate too obese to be executed; judge cancels hearing

At the hearing, attorneys for death-row inmate Marcel Williams planned to argue his execution should be stopped because the state's lethal injection protocol likely won't succeed in killing him and could cause irreparable organ damage, which violates his federal rights. Williams has diabetes, high blood pressure and is "extremely obese," the complaint says.

In her three-page decision to cancel the hearing, Baker summarized the U.S. 8th Circuit Court of Appeals' decision to overturn the execution stays put in place by her court as well as a Supreme Court execution case, Hill v. McDonough.

Baker wrote that Williams was diagnosed with diabetes and other health problems nearly two years ago. Yet the complaint was filed last week, she noted.

"It appears to the Court, at least from the face of his complaint, that Mr. Williams could have brought his claims far in advance of April 11, 2017," Baker wrote.

Baker then said Williams' attorneys must show cause by 3 p.m. Tuesday for why the court should not dismiss their complaint.

Williams' attorneys have filed a response, arguing, in part, that his "physical condition has continued to decline and an assessment of the risks of the lethal-injection protocol should be assessed at the time his execution is imminent."

Lawyers for a condemned Arkansas death-row inmate will argue Tuesday that his scheduled lethal injection will either cause an agonizing death or fail to kill him because of his obesity, violating his constitutional rights.

U.S. District Judge Kristine Baker will listen to attorneys for Marcel Williams present evidence at a 1 p.m. hearing that the state’s lethal injection protocol is “unlikely to succeed” in killing him, according to court documents.

Williams was sentenced to death Jan. 14, 1997, in the killing of Stacy Errickson after he confessed to raping, beating and choking the mother of two.

When Williams entered the Cummins Unit on a parole violation in 1995, he weighed 195 pounds, according to his lawyers. In the 20 years he’s been in extreme solitary confinement, Williams has gained 200 pounds and developed “high blood pressure, diabetes and high cholesterol,” the document says. His body mass index puts him in the “extreme obesity” range.

Dr. Joel Zivot, a physician and associate professor at Emory University School of Medicine, reportedly studied Williams’ health and the state’s execution protocol. Rather than killing Williams, lethal-injection will likely leave him with “disabling, irreversible injuries,” including damage to multiple organs, according to the filings.

If the execution does succeed, “it will be a slow, agonizing death experienced as suffocation,” the document states.

Both outcomes violate Williams’ rights under the Eighth Amendment, which protects against cruel and unusual punishment, his lawyers argued.

He is scheduled to be put to death Monday.

Check back with Arkansas Online for updates on this developing story and read Wednesday's Arkansas Democrat-Gazette for full details.