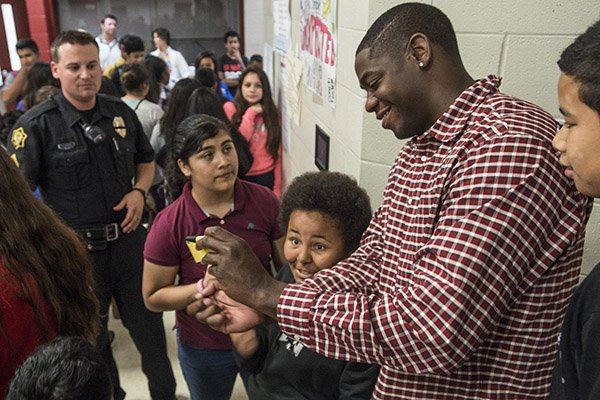 Ronnie Brewer takes photos with students at Sonora Middle School on Friday, May 15, 2015, in Springdale.

FAYETTEVILLE — Of all the accolades Ronnie Brewer has received, his induction into Fayetteville High School’s Hall of Greats may be the most special.

Brewer, who shined as a combo guard for the Purple’Dogs before playing for the Arkansas Razorbacks and spending eight seasons in the NBA, is among six inductees in the 2017 Hall of Greats class, which will be honored with a golf tournament today and a banquet at the Chancellor Hotel tomorrow. The others are former athletes David Lashley, Gail Striegler and Robert Wilkes and longtime supporters Bill and Carol Brunner and Phil Stewart.

Many of Brewer’s fondest basketball memories were from high school, such as a game against Fort Smith Northside in the final regular-season game of his career in 2003. Down by two points and the team’s long conference winning streak on the line in the closing seconds, everyone in the gym figured Brewer was going to take the final shot, just as he did with a buzzer-beater to defeat Springdale High earlier in the season.

“The streak was in my hands and I had made up my mind that I was going to shoot a three,” Brewer said. “They ran a double team at me and I was still gong to pull up for the shot, but I saw Tony Dinkins wide open in the paint sealing his man, so I just fired a pass to him.”

Dinkins made the shot and Fayetteville went on to win in overtime. Brewer recalls every detail about many games like that, but an even better memory is the way the Purple’Dogs’ student body packed every gym, even for out-of-state games.

“I didn’t play football. I didn’t play baseball, but everybody who participated in those sports tried to support each other,” Brewer said. “Whether we grew up at Woodland (Junior High) or Ramay, we all were one big family when we got to the high schoo. The love that we gave each other was awesome.”

Growing up, there were many greats athletes Brewer followed as a youngster. His dad, Ron Brewer Sr., was a star basketball player at both Fort Smith Northside and the University of Arkansas before spending 10 seasons in the NBA.

“I was at almost every game that Nick Bradford played,” Brewer said. “I was a huge fan of his when he was at Fayetteville and when he went to college at Kansas, and I’m still close friends with him.

“I was young, but I knew who Davor Rimac was and the Sitkowski brothers and Sean Sutton and coach (Brad) Stamps and Chris Oliver and, of course, Eugene Watson. I knew who they were because my dad would teach me the game by watching what they were doing. The guys who laid the groundwork for the Fayetteville program before me.

“Appreciating that tradition makes me proud to say that I’m a Fayetteville Bulldog.”

Brewer hasn’t played in the NBA for two seasons, but isn’t ready to hang up his high tops yet. He spent this past season in the NBA’s Developmental League and continues to work out daily.

“You never know when the next opportunity will come, so I want to be ready,” he said.

Because he left college a year early to become a Utah Jazz lottery pick in 2006, Brewer fulfilled a promise to his mother, Carolyn Brewer, by taking night classes to earn a degree in Broadcast Journalism. He stays active with the Ronnie Brewer Foundation, which built a gym at the Boys & Girls Club and also helps families with holiday meals, toy drives, back-toschool backpack programs and even bought air conditioners for a neighborhood in need.

He also inspires at-risk youth with things like the “Brew Crew” Camp and scholarships.

Brewer could have purchased a mansion in a Chicago or a Salt Lake City suburb when he was making millions each year with the Chicago Bulls or Utah Jazz, but he instead bought a home in Fayetteville, where he still resides today.

“This is all I know. This is home,” he said. “I’m very proud to call this my home and love every aspect of Fayetteville so much. I couldn’t imagine living anywhere else because this is where I want to make the biggest impact on other’s lives in any way I can.”