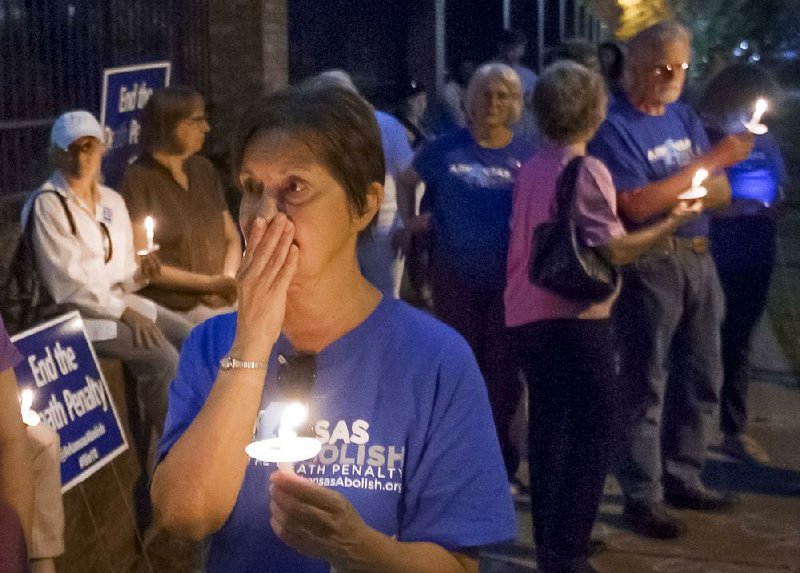 Suzanne Ritchie and other members of the Arkansas Coalition to Abolish the Death Penalty hold a vigil Thursday night outside the Governor’s Mansion in Little Rock in opposition to the scheduled execution of Ledell Lee. Ritchie said she taught Marcel Williams, who is scheduled to be executed Monday, in junior high school.

GRADY -- Arkansas killed a prisoner Thursday night for the first time in more than 11 years after the state high court spared another death-row inmate's life.

Ledell Lee, 51, who maintained his innocence to the very end, was pronounced dead at 11:56 p.m. after a three-drug sequence took 12 minutes to stop his heart.

Lee, his eyes open while strapped to a gurney with IV lines inserted into both of his arms, did not make a final statement from the execution chamber even though he was asked twice to do so.

Two minutes after Arkansas Department of Correction Director Wendy Kelley called for the execution to begin at 11:44 p.m., Lee's eyes began to slowly shut and he appeared to swallow multiple times before his eyes closed for the final time at 11:49 p.m. A coroner pronounced Lee dead seven minutes later after opening Lee's eyelids and checking his chest with a stethoscope.

A Pulaski County jury recommended death for Lee after finding him guilty in the 1993 murder of 26-year-old Debra Reese in her Jacksonville home. Circuit Court Judge Chris Piazza presided over the trial and imposed the sentence.

Reese's family did not comment after the execution, saying they would release a statement later. Her father Stephen Williams said in advance of Lee's execution date that he was certain of Lee's guilt.

Williams said the family would watch live video of Lee's death, opting to view the "private moment" in isolation rather than with other witnesses, including citizen volunteers, Lee's attorneys and the media.

Lee was convicted of invading Reese's home, striking her three dozen times with a tire thumper and strangling her. Reese was a newlywed with a 7-year-old son from a previous marriage.

Lee died after state and federal courts rejected his flurry of last-ditch appeals, which ranged from requests for fresh DNA tests to claims of intellectual defect and ineffective counsel. It followed an Arkansas Supreme Court stay of execution for 47-year-old Stacey Johnson, convicted in the 1993 murder of Carol Heath, to allow him time to argue for new DNA tests of crime-scene evidence.

Johnson also was scheduled to die Thursday, which marked the halfway point in Gov. Asa Hutchinson's plan to execute eight convicted murderers in 11 days. The hurried schedule drew a firestorm of national and international media to Arkansas to what would have been an unprecedented rate of executions in the United States since the highest court reinstated the death penalty 40 years ago.

But of the four scheduled to have died by now, Lee is the only one who didn't receive a court order temporarily sparing his life. The state Supreme Court stayed the executions of Don Davis and Bruce Ward on Monday before the midnight deadline.

Court rulings that went against the inmates Thursday opened the door for Lee's execution. The U.S. Supreme Court rejected appeals that the state's method of execution is "cruel and unusual" and that the compressed schedule prevented the condemned inmates from a fair clemency process.

Lee became the first Arkansas prisoner to die by lethal injection since Eric Nance in November 2005.

He also was serving 60-year and life prison sentences on separate convictions of raping two Jacksonville women. Prosecutors in the mid-1990s, after Lee received the death sentence, stopped pursuing different murder and rape charges against him in cases that included 1992 slaying of Christine Lewis, also of Jacksonville.

"Tonight the lawful sentence of a jury which has been upheld by the courts through decades of challenges has been carried out," Attorney General Leslie Rutledge said in a statement. "I pray this lawful execution helps bring closure for the Reese family."

Hutchinson spokesman J.R. Davis said the governor "knows that this is the most grave responsibility he'll ever have."

"The family of Debra Reese will have closure this evening," Davis said. "For the first time tonight they go to sleep with the justice they have received."

Lee's attorneys left without making a statement to the media.

Hutchinson scheduled Lee's execution a month ago, but the inmate spent much of Thursday in limbo.

At 4 p.m., Lee refused a special last meal and opted instead to receive Holy Communion, Arkansas Department of Correction spokesman Solomon Graves said. He received a wafer or a piece of bread, and the wine was replaced by either grape juice or water, Graves said.

The Department of Correction prepared to execute Lee at 7 p.m. Three media witnesses, including an Arkansas Democrat-Gazette reporter, rode in a van beyond a fence, through a sallyport and toward the one-story execution chamber building, marked by paper-sized, red letters "EC." It's surrounded by other nondescript buildings.

The witnesses arrived at 6:22 p.m. but didn't get out of the vehicle. At 6:55 p.m., the van's driver told them Lee's execution had been postponed until at least 8:15 p.m. at the request of the 8th U.S. Circuit Court of Appeals, which was considering one of his appeals at the time. The appeals court later stayed his execution until 9:15 p.m., when it ruled on the last of Lee's appeals.

A U.S. Supreme Court stay remained in place for another two hours.

In the media room in the Cummins Unit, prison officials sat at a table chatting. One woman -- who did not give her name -- passed time with a coloring book after, she said, she felt idle Monday while the legal actions played out. She later stashed it away without finishing her page.

Awaiting any news, reporters flocked to the front of the room when Graves headed toward the lectern. They milled around, talking to one another and trying to get Internet service.

Just after 11:30 p.m., Graves told the group that the Department of Correction was ready to carry out the execution. Reporters fell silent.

The Arkansas Supreme Court on Thursday also reversed a Pulaski County judge's ruling that the state could not use its vecuronium bromide -- one of the three-drug "cocktail" -- after McKesson, the drug's distributor, filed suit claiming that the state used deceit to obtain the supply.

State justices then rejected a series of appeals by Lee, who requested postponement on several grounds, including that he was intellectually deficient and that his previous attorneys were ineffective.

Johnson, whose life was spared, was convicted of strangling Carol Heath in her De Queen apartment while her two children hid in a closet in April 1993. Heath's then-6-year-old daughter, Ashley, identified Johnson as the killer, and he was arrested on his way home to New Mexico a few months after the death.

Johnson was convicted in 1994, but the conviction was thrown out after a police officer was allowed to testify that Heath picked Johnson out of a lineup. Johnson was convicted a second time -- which was upheld by the state Supreme Court in 2000 -- in a retrial that included testimony from Heath, although Johnson's attorneys have said she was found incompetent to testify in therapist's records that were sealed at the time.

Johnson has maintained his innocence for the more than two decades since he's been on death row.

Both Lee and Johnson were represented in their appeals by the Innocence Project and the American Civil Liberties Union. The Innocence Project, founded in 1992, has used DNA evidence to exonerate 182 people, its spokesman Paul Cates said, but it has not had a successful case in Arkansas.

On Thursday, Innocence Project Senior Staff Attorney Nina Morrison condemned the state for what she called a rushed execution.

"Arkansas' decision to rush through the execution of Mr. Lee just because its supply of lethal drugs are expiring at the end of the month denied him the opportunity to conduct DNA testing that could have proven his innocence," she said. "While reasonable people can disagree on whether death is an appropriate form of punishment, no one should be executed when there is a possibility that person is innocent."

The scheduled executions attracted nearly 40 protesters to the Governor's Mansion in Little Rock and outside of the Cummins Unit in Grady.

Hutchinson was at his Capitol office because of a previously scheduled event at the mansion, a spokesman said. It didn't stop some 30 protesters from praying during a candlelight vigil.

One protester, Amy Washburn of North Little Rock, who is a foreign language teacher for online company VIPKID in China, said she thinks executions are "barbaric and archaic" and had to stop "regardless of what crime was committed."

"I think this is a lot about the drugs are expiring and where do the drugs come from, and let's look strong in front of the Republicans and the party in the state," she said. "I just think that killing somebody in any way is wrong regardless of what they have done."

Thursday's executions drew eight people, four times as many as those who came Monday and included Johnson's wife and stepdaughter and a relative of another death row inmate set to die Monday.

The executions' uncertainty after days of legal filings and court decisions had turned into an emotional roller coaster for Johnson's wife, Judy, and his daughter Latasha Logan.

"What they're going through now, they're actually suffering more," Judy Johnson said of the death row inmates.

Three Arkansas inmates -- Jack Jones, Marcel Williams and Kenneth Williams -- are scheduled for lethal injection by April 27. State attorneys have not appealed a stay of execution for Jason McGehee, whose execution date is also April 27.

Information for this article was contributed by Hunter Field, Brandon Mulder and Michael R. Wickline of the Arkansas Democrat-Gazette; and Emma Pettit of Arkansas Online. 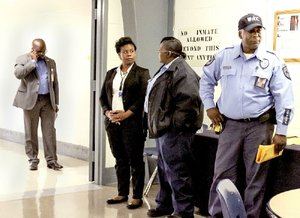 Photo by Emma Pettit
Arkansas Department of Correction spokesman Solomon Graves (left) walks back into the media center at the Cummins Unit after getting an update on the scheduled execution of Ledell Lee. 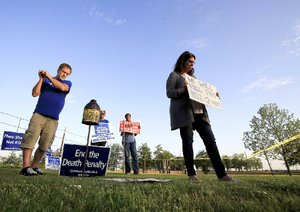 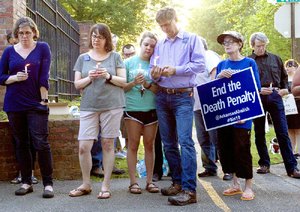 Photo by Benjamin Krain
Loretta Rech (second from left), her daughter Sarah and husband, Bill, join a candlelight vigil Thursday evening outside the Governor’s Mansion with members of the Arkansas Coalition to Abolish the Death Penalty.