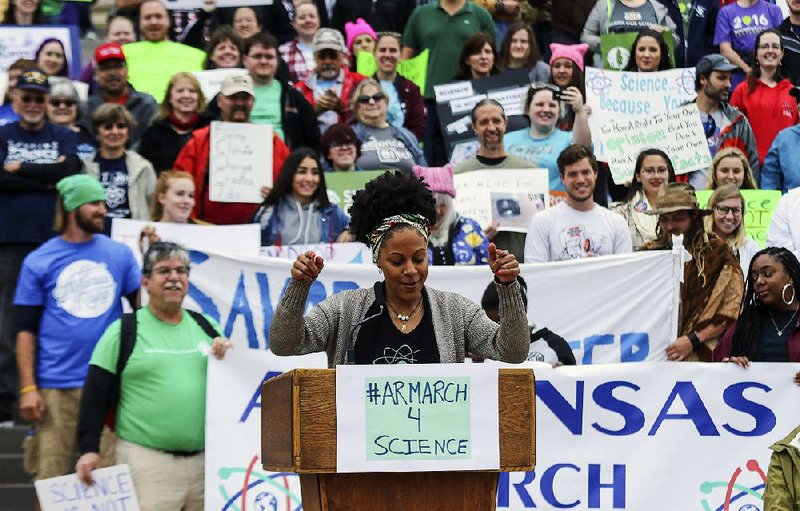 Haleigh Eubanks, a Ph.D. candidate in the Interdisciplinary Biomedical Science Program at the University of Arkansas for Medical Sciences, speaks at Saturday’s March for Science rally outside the state Capitol in Little Rock.

Johnny Sain spent his childhood listening to the song of the whippoorwill, learning the difference between harmless and venomous snakes and examining "critters" that his grandfather caught for him and kept in a jar.

He didn't have a college degree or a white coat. Just his curiosity.

"I was an observer," Sain said. "Of course, I had no credentials. But I was, by the most basic definition, a scientist."

Sain, a conservationist and interim executive director of the Arkansas Wildlife Federation, joined many actual scientists at the Arkansas Capitol on Saturday afternoon as part of a global rally to promote science and reason. Outdoorsmen, engineers and medical researchers were among more than 1,000 people who participated in Little Rock.

Many were protesting the policies of President Donald Trump, who has called global warming a hoax and proposed cutting the budgets of the federal Environmental Protection Agency by 31 percent and the National Institutes of Health by 18 percent. The president has proposed cuts to most federal agencies, even eliminating some, to offset an increase in defense spending and to promote private enterprise in the public sector.

Dozens of rally attendees carried signs that were critical of the Trump administration. One said "Make America Think Again," a play on Trump's campaign slogan. Another sign called for "evidence, not alternative facts."

Nora Simmons of Conway was among those who said Trump's policies on science and the environment were concerning.

"We believe in science, and without science everything around us doesn't exist," she said. "It's important that our government understands that we don't want science funding cut and we want our environment protected."

Rally participants chanted "science not silence" as they marched west on Capitol Avenue in Little Rock.

Researchers from UAMS Medical Center and Arkansas State University at Jonesboro were among those who spoke to attendees Saturday.

The Arkansas Sierra Club, a chapter of a national conservation group, organized the march.

"Yes, science matters," said Glen Hooks, director of the Arkansas Sierra Club. "But I'm not seeing that it matters enough to our elected officials and our decision makers. I'm seeing our elected leaders actively ignoring science and governing by anecdote instead of using facts and data. I've seen our elected officials actively deny that our human activities are causing the climate to warm, even though virtually every climate scientist on earth says that's what happening."

For Simmons, the march was more than political. It was personal.

She said her son was born with omphalocele, a birth defect in which a child's liver, intestines or other organs develop outside the abdominal wall.

It's a rare condition that's often fatal. But he survived.

"Without medical science," Simmons said, "he would not be alive." 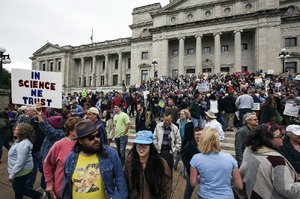 Photo by Mitchell PE Masilun
People mingle Saturday after the March for Science rally on the front steps of the state Capitol in Little Rock.