Arkansas set for new round of executions; 2 moved near death chamber 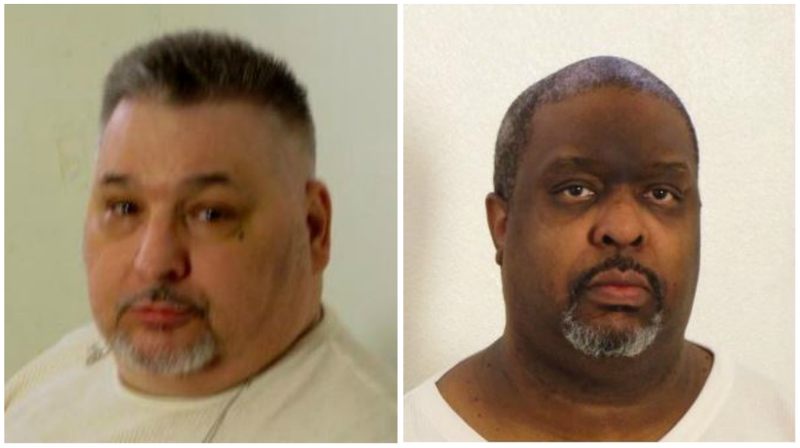 Fellow death-penalty states watching Arkansas' try for an unprecedented number of lethal injections can take a tip from the results so far, legal scholars said.

Carrying out any number of death sentences under court scrutiny is not a simple task.

A dizzying number of legal appeals have succeeded in halting half of Arkansas' planned eight-man execution schedule, though the state plans this week to go ahead with at least three more lethal injections, starting tonight.

After a federal judge on Friday declined to offer stays for Jack Jones Jr. and Marcel Williams, who are set to die at the Cummins prison unit tonight, their attorneys said they intended to appeal.

In preparation for their executions, both Williams and Jones have been moved to holding cells next to the death chamber at Cummins, a prisons spokesman said.

Arkansas had planned to carry out double executions last Monday and Thursday. With stays and appeals mounting, the attorney general's office both evenings pursued one execution and allowed the second death warrant to expire.

In an interview Friday, Attorney General Leslie Rutledge said it was not her intention to settle for one execution today.

Rutledge said there are a "couple dozen attorneys" in her office working on the cases surrounding the executions.

"A scheduled execution always precipitates the defense attorneys throwing everything they can at every possible court," said Douglas Berman, a law professor at Ohio State University.

To those following the case, Berman said the arguments can often seem like they should have been made years ago -- or seem built on questionable foundations -- but he said they are a part of the appeals process and the "obligation" of the lawyers representing the condemned prisoner.

"People often don't realize that some issues like new evidence of innocence literally cannot be litigated during appeals in many states. Some claims relating to mental illness at the time of execution cannot be raised until the time of execution, by definition," Brandon Garrett, a law professor at the University of Virginia, said in an email.

In Arkansas, the eight inmates whose executions were set for this month challenged together the state's hurried execution schedule as unconstitutional. Along with another inmate not set for death, they also challenged one of the drugs used in the state's method of execution.

Those cases were both taken to the U.S. Supreme Court last week, where they were denied. The supplier of another one of the three execution drugs was also unsuccessful in a bid in state court to halt the use of its products for the lethal injections.

For now, the majority of the matters before the courts are cases specific to each of the prisoners scheduled for execution this week.

While the prisoners were unsuccessful in their claims as a group, three of the four executions last week were stayed over individual claims.

Don Davis and Bruce Earl Ward, both set to die today, were given a reprieve, as the U.S. Supreme Court is set to consider a case today regarding mental evaluations for indigent defendants, an allowance they both have sought in court. Davis and Ward were originally set to die last week.

Stacey Johnson's execution also was stayed, with the Arkansas Supreme Court allowing his plea for DNA testing to be sent back to a lower court.

Another inmate with an active death warrant, Jason McGehee, has had his execution stayed by a federal judge after he was recommended for clemency by the state Parole Board.

Rutledge's office has not said whether it plans to appeal McGehee's stay.

"With eight cases, the amount of things that have to be decided in an unbelievably short amount of time is staggering," said Robert Dunham, the executive director of the nonprofit Death Penalty Information Center.

As the prisoners mounted their broad appeals in the weeks leading up to the start of the executions, Dunham said their attorneys, as well as state lawyers and judges, likely had less time to devote to the appeals than they would have for the normal individual appeals that come before a single scheduled execution.

Dunham suggested that effect may have created a backlog of cases that were left to be decided late into the night of each execution.

"It may be a bit less chaotic [this week], because on Thursday the courts addressed a number of the systemic issues," Dunham said.

Inexperience could have also played a role in the process, said Berman, the T̶e̶x̶a̶s̶ Ohio* law professor, offering his own state -- the most prolific executioner in the U.S. -- as an example.

"Their courts are more accustomed to dealing with all the last-minute litigation," Berman said. "I suspect that was an additional challenge in Arkansas."

*CORRECTION: Douglas Berman is a law professor at Ohio State University. A precious version of this story in Monday’s editions incorrectly identified the school where Berman teaches.