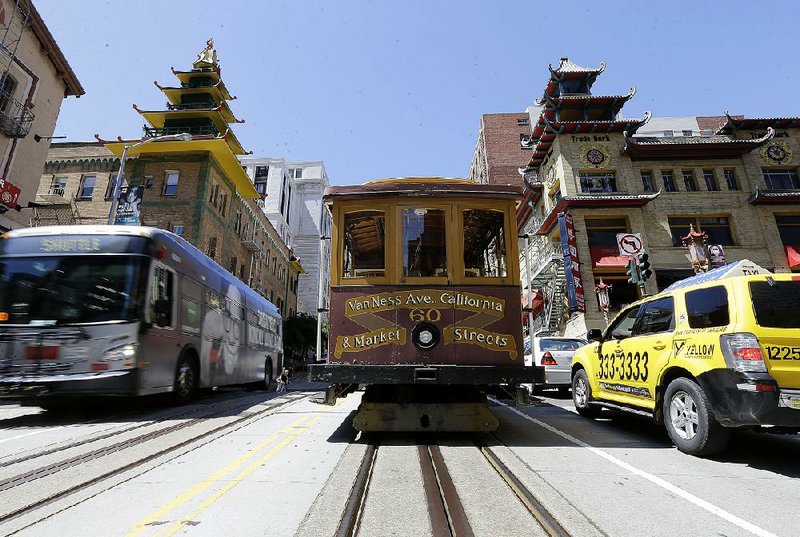 A San Francisco cable car sits idle Friday during a power failure caused by a fire at a substation. Some regulated utilities are spending more money on improvements to their distribution grids, a move designed to generate revenue as electricity demand remains flat nationwide.

Electric utilities have been doing everything they can to preserve their bottom line, from conducting multibillion- dollar mergers to snapping up more profitable natural gas businesses. Their trouble lies in one thing they can't control: demand.

Power consumption in the U.S. has stalled for the past decade, breaking the link the industry has enjoyed with economic growth. For more than a century after Thomas Edison invented the light bulb in the 1870s, electricity demand rose steadily, increasing utility profits in the process.

The lull couldn't have come at a worse time for the industry, which is already struggling with the end of historic monopolies. Power-sipping appliances, LED lighting and a shift away from heavy industry all have contributed to the slowdown, and that's forcing traditional generators from Duke Energy Corp. to Southern Co. to re-examine how they can make money.

"Efficiency cuts utilities' revenues and not their costs, and this is a big problem," said Amory Lovins, chief scientist and co-founder of the Rocky Mountain Institute, a nonprofit clean energy research group based in Colorado. "The whole business model is upside down."

Utility executives, policymakers and industry financiers are discussing the trends at Bloomberg New Energy Finance's annual summit in New York this week. Power sales have remained steady since 2010 as the U.S. economy expanded an average of 2.1 percent, according to government data compiled by the London-based research arm of Bloomberg LP. Government forecasters at the Department of Energy don't predict a significant rebound anytime in the years to come.

Duke Energy Chief Executive Officer Lynn Good, whose service territory spans Florida and the Carolinas, is seeking to make money upgrading the distribution grid to cope with wind and solar power. "The transformation that is underway gives us opportunity to serve customers in a better and different way," Good said at the Bloomberg event Monday.

Xcel Energy Inc., which owns utilities in Minnesota and Colorado, CEO Ben Fowke is hoping regulators will authorize him to build $3.5 billion of renewables plants in the next five years and to build those costs into the rates customers pay.

Energy data complicate President Donald Trump's ambition to revive demand for coal, which made up about 34 percent of the electricity generated in the U.S. in January, according to the Energy Department. With demand stagnant and independent power producers turning to natural gas, wind and solar plants, utilities have less room for the giant power generation units they traditionally have built.

The outlook isn't for a sudden revival in power demand. Total electricity use is forecast to increase 0.8 percent by 2050 as the economy continues to shift to less energy-intensive industries and equipment gets more efficient, according to a 2017 annual report from the U.S. Depart of Energy's Energy Information Administration.

So far, the utilities have managed through a combination of mergers and cutting costs, announcing $79.4 billion worth of U.S. deals last year, the most since 2007. They've snapped up natural gas assets and pared back their ambitions for building coal and nuclear power plants.

In the U.S., 32 states now offer financial incentives for electric energy efficiency or have changed rate structures so profits aren't tied to how much power is sold, compared with 19 a decade ago, according to Steven Nadel, executive director of the American Council for an Energy-Efficient Economy. Saving a kilowatt-hour of electricity with energy efficiency costs about half as much as generating one with a new power plant, he said.

Some utilities are embracing that future and learning how to profit from efficiency. Last year, Southern paid $431 million for PowerSecure International Inc., which provides efficiency services and manages solar projects for U.S. businesses. The French utility Engie SA has been offering a suite of energy-trimming services for its customers.

Another strategy among the regulated utilities, which can earn a guaranteed return on capital investments they make, is to increase spending on their distribution grid. The cost of investments is passed onto customers, like a $13 billion grid upgrade Duke outlined earlier this month. Last year, electric utilities invested $121 billion on infrastructure in the U.S., more than double the amount a decade ago, according to the Edison Electric Institute, the industry's trade group in Washington.

That spending may trigger a backlash from customers, said Paul Patterson, a utility analyst for Glenrock Associates LLC. Lovins at the Rocky Mountain Institute suggests that to avoid a "catastrophic" collapse of their businesses, utilities should start selling services for a fee -- such as supplying heating and cooling for buildings -- instead of only providing power in the form of kilowatt-hours.

"It's a good idea to sell customers what they want before someone else does," he said. "Sooner rather than later utilities need to be selling what the customer wants, which is a service, like hot showers and cold beer."