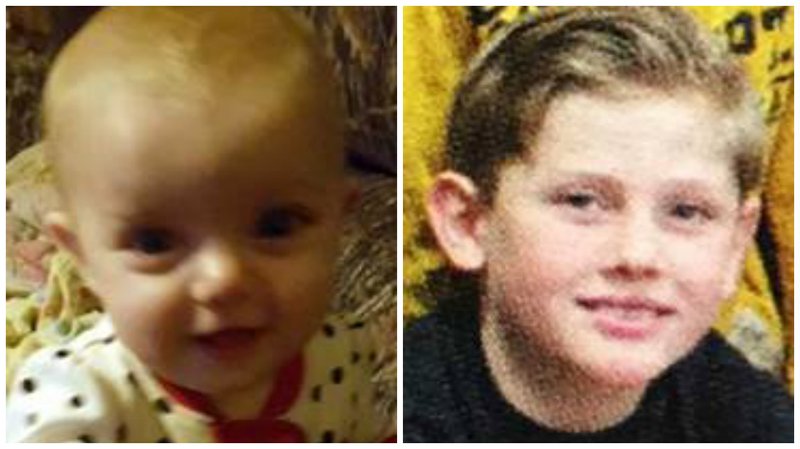 Acelynn Wester, 2, (left) and her brother Reilly Scarbrough, 9, went missing earlier this month from Mena, according to the National Center for Missing and Exploited Children.

Searchers on Friday afternoon found the body of a 2-year-old Arkansas girl in the area where her dead mother was found earlier this week, authorities say.

In a news conference, Polk County Sheriff Scott Sawyer said the body of Acelynn Wester was found about 2 p.m. Friday in a heavily wooded area southeast of Cove, which is located about 10 miles south of Mena.

Acelynn's brother, 9-year-old brother Reilly Scarbrough, is still missing. Their mother, Bethany Jo Wester, was found in a creek southeast of Cove around 1:20 p.m. Tuesday. Bethany Jo Wester's uncle, Steven J. Payne, 66, was found dead at his home in Hatfield around 12:30 p.m. Thursday, according to the sheriff’s office.

Steven J. Payne, 66, was found dead at his home in Hatfield around 12:30 p.m. Thursday, according to a news release from the Polk County sheriff’s office.

Payne was the uncle of Bethany Jo Wester, whose body was found in a creek southeast of Cove around 1:20 p.m. Tuesday, Arkansas Online previously reported. Cove is about 4 miles southwest of Hatfield. Both deaths are being investigated as homicides, the sheriff’s office said.

Wester’s two children have not been seen since Sunday, authorities said. At least nine agencies — including the Polk County sheriff’s office, the Mena Police Department and the FBI — are searching for 2-year-old Acelynn Wester and her 9-year-old brother Reilly Scarbrough.

The National Center for Missing and Exploited Children labeled the two children as “critically missing” Thursday morning, according to a statement.