Trump tells NRA: 'You have a true friend' in White House 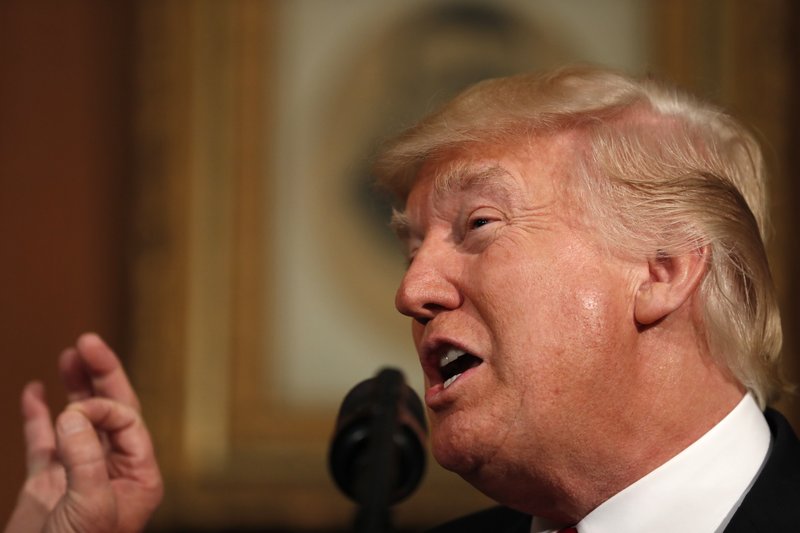 President Donald Trump speaks at the Interior Department in Washington, Wednesday, April 26, 2017, before signing an Antiquities Executive Order. The president is asking for a review of the designation of tens of millions of acres of land as &quot;national monuments.&quot; (AP Photo/Carolyn Kaster)

ATLANTA — President Donald Trump reaffirmed his support for gun rights Friday, telling attendees of a National Rifle Association convention that "the eight-year assault on your Second Amendment freedoms has come to a crashing end."

Trump, the first sitting president to address the group's annual convention in more than 30 years, assured the audience that he would defend their right to bear arms.

"You have a true friend and champion in the White House," he said.

The president's trip to Atlanta also will serve as his first foray into a congressional race since taking office. Trump is expected to attend a private fundraiser for Republican congressional candidate Karen Handel, a local election that has become a national referendum on his presidency.

Trump has been a champion of gun rights and supportive of NRA efforts to loosen restrictions on gun ownership. During the campaign, he promised to do away with President Barack Obama's efforts to strengthen background checks and to eliminate gun-free zones at schools and military bases.

The last president to address an NRA convention was Ronald Reagan, who spoke to the 1983 gathering, according to the powerful gun rights lobby. Trump's appearance in Atlanta has sparked protests.

The NRA is pushing for federal legislation to make any state's concealed-carry permits valid nationwide. Opponents say the move would effectively turn the weakest gun standards in the nation into the law of the land. The GOP-led Congress already passed a resolution to block a rule that would have kept guns out of the hands of certain people with mental disorders, and Trump quickly signed it.

No guns at a gun convention? That seems contradictory but at least for the forum where President Donald Trump will speak at the National Rifle Association, attendees aren't allowed to bring in firearms.

Guns are allowed in most public places in Georgia, including the Georgia World Congress Center in Atlanta where the NRA is holding its annual meeting through the weekend. But as with most presidential appearances, firearms aren't allowed.

The NRA was providing lockers for free so people could stow their firearms while inside the room where Trump was to speak Friday afternoon.

Also, each person entering the hall at the center had to go through metal detectors and have bags inspected.