License plate readers at University of Arkansas to be delayed 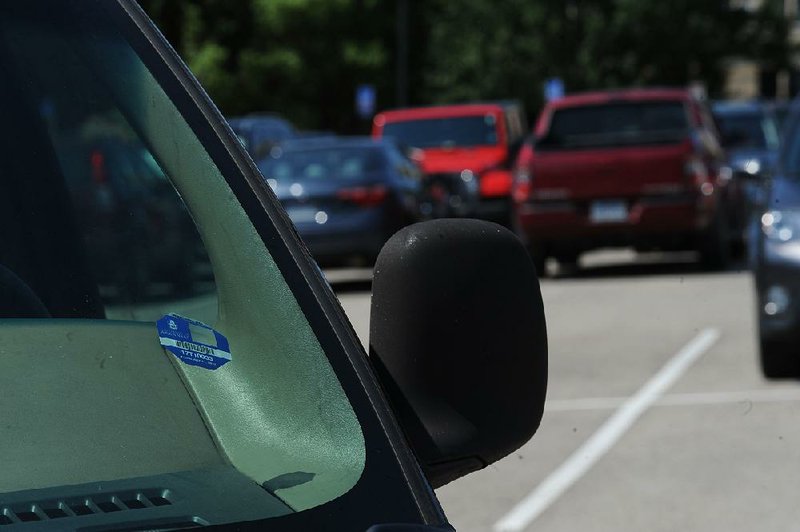 Cars sit Friday in Lot 71 on the University of Arkansas campus in Fayetteville. A planned change to a new system of parking enforcement has been delayed, forcing the university to continue issuing permit decals for the coming academic year.

FAYETTEVILLE -- The University of Arkansas, Fayetteville has delayed a plan to utilize camera-based technology to enforce parking regulations, slowing the adoption of a system in place at campuses in other states but described by UA's top parking official as believed to be a first for an Arkansas school.

He said the new license plate recognition technology, sometimes known as LPR, will in future years eliminate a need for parking decals in vehicles.

"We didn't order a full year's worth of permits, knowing we're going to eventually get LPR working," Smith said. He said he did not have a precise estimate on how much UA will spend on permits, but he said it should be less than half that spent in a typical year and might be less than $15,000, with university staff planning to handle mail-out duties.

He said annual costs to the university in other years totaled about $70,000 if mailing expenses were included with decal printing costs.

The university issued 28,945 parking permits in fiscal 2016, according to its most recent annual report. With increased enrollment in recent years, the number of available spaces has not kept pace.

A transit master plan written by consultants after a 2015 visit to the UA campus noted that "the difference between the number of enrolled students and parking spaces on campus is at its largest in over 27 years."

The plan also noted, however, "that at the busiest time of day, there are more than 3,500 unused parking spaces on campus."

Once in place, the license plate recognition system will offer more parking options, Smith said, with students able to purchase permissions for shorter time periods, like a summer-only permission, for example.

Texas Tech University and the University of Kansas are among campuses to adopt license plate recognition technology, with Smith last year telling the university's staff senate that using car-mounted cameras to monitor parking lots would be "more efficient and probably catch more people" in spaces without permission.

As recently as May, the university said the new system would be in place by July.

But testing of car-mounted cameras has yet to happen, Smith said.

"We have a lot of things that have to be set up in the new system," Smith said, describing the delay as caused by underestimating the work involved. He declined to say when the new system might be in place.

In January, the university, after accepting bids, selected Texas-based NuPark to provide the technology. Expenditure records show UA paid $113,683.51 to NuPark in March. Smith said UA paid half of the technology costs up front and expects to pay the rest once the system is fully operational.

Car-mounted cameras capture images of license plates, which are then compared using computer technology to a list of vehicles. The American Civil Liberties Union has described the use of license-plate readers as a surveillance technology, with information databases containing the location information of any and all motorists passing by.

Arkansas lawmakers restricted who can use the technology, carving out exemptions for police and parking enforcement entities. Data may be kept for no more than 150 days unless it's part of an ongoing investigation, according to state law.

Smith said the law also requires a data policy to be developed by an entity utilizing the technology. He said the university is working on such a policy and will comply with the state law.

The system, once in place, should allow for more information to be shared via smartphone, Smith said.

"We'll eventually have an app that will show where all of the available parking is at any time during the day," Smith said.

Print Headline: License plate readers at UA to be delayed