Still capturing the scene: 26 years in, Fluke and its creator continue to keep punk-rock lovers in the loop 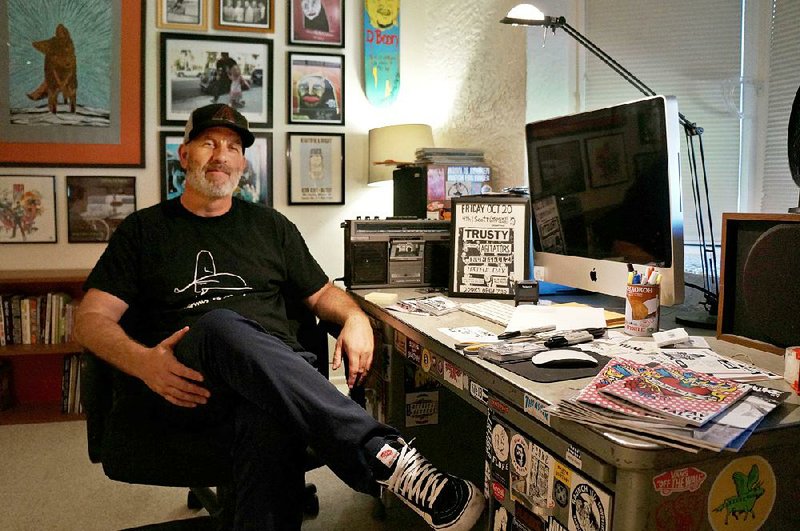 Matt Thompson, who has been publishing Fluke fanzine since 1991, is now living in Phoenix.

In 1991, three punk-rock-loving, skateboarding buddies in North Little Rock copied and pasted together the inaugural issue of Fluke fanzine. Twenty-six years later, one of those friends is still at it.

"Today is the 26th anniversary of Fluke," says Matthew Thompson on July 18 from his home in Phoenix.

The homemade publication -- now with 14 issues published in all -- is what he created with Jason White and Steve Schmidt, whom he met at Lakewood Junior High School and Northeast High School, respectively, to document the nascent central Arkansas punk scene.

Over the past two editions of Fluke, Thompson has taken a look back at the early '90s Little Rock punk underground. He has also gathered 18 unreleased demos by bands like Econochrist, Trusty, Step by Step, Quisp, 12ft6 and others from that era for the new audiocassette-only release Very Little Rock: A Punk Compilation From Little Rock Arkansas 1988-1992.

The tape's title was inspired by a quote from former Black Flag singer Henry Rollins.

"There's very little rock in Little Rock," Rollins said dismissively in 1987, a year after his band performed for the only time in the state capital. Thompson used the play on words to emphasize the Little Rock-centric nature of the collection.

"All of those songs are from demo tapes," Thompson says. "Bands would record demos and pass them around. Most of those songs have never been released, so I released them."

He sees the collection, which he sells for $3, as an extension of the latest issue of Fluke.

But why cassette only?

"Back then, I always had my favorite cassette in my pocket," Thompson, 45, says of his punk rock youth.

"If I went to someone's house or got in their car, I could say, 'Check this out.' So I wanted to throw it back to that, to where these demo tapes came from, because that's all they were, tapes."

Self-published 'zines have been around since the 1930s and were first made by fans of science fiction and fantasy.

By the '70s and '80s, 'zines were a crucial side-effect that cropped up from regional punk scenes. Inspired by punk rock's do-it-yourself ethos, creative types wrote reviews, conducted interviews, made comic strips and other art then compiled it all into cleverly copied and pasted booklets as documentation of themselves and their environment.

"That was how we found out about other scenes," Thompson says.

"People would contribute scene reports to Maximumrockandroll, and you could learn what bands were popping up, what 'zines were coming out," Thompson says. "You could also send them your 'zine or your record or your tape and they would review it. That's how we got our first orders for Fluke."

In central Arkansas, before Fluke, Tim Lamb started the 'zine Lighten Up. There was also Ahoalton, created by Mark Dober, and Bobby Matthews and Matt Besser's Barking at Life. The Little Rock punk scene and those involved in it were also captured in the Richard Matson-directed 2007 documentary Towncraft.

Says Mitchell Crisp, 48, a Little Rock-based film production designer who was part of the early scene and contributed to Fluke: "'Fanzines were part of my childhood because I was a punk-rock kid in the early '80s. 'Zines connected us to people around the world."

Burt Taggart, 42, former member of Chino Horde and founder of the Little Rock-based Max Recordings label, says, "There were lots of bands and people who wanted to play music. There were also people who didn't want to pick up a guitar or write a song, but they wanted to do something else and contribute some other way. 'Zines were another avenue where you could contribute.

"'Zines went a long way to make it feel like there was this whole other culture happening."

"That became as much of a social event as going to see a band," he says, while seated at a table in the performance space at Vino's, which was first DMZ and then Mandrake's, and served as Ground Zero of the Little Rock underground music movement. "It was just another case of watching someone else do it and saying, well, yeah, get Mom's typewriter, go to Kinko's, get some scissors and some tape and paper. It was a necessary and crucial component to keeping the scene alive. We're all gonna be at the 24-hour Kinko's and work for two hours and go get something to eat and go back and keep working."

'Zines like Fluke, and punk rock in general, are linked by community, Thompson says.

"The essence of punk rock is building something, and to build something you have to have a crew. You can't do it on your own. That's the way it's always been for me."

Fluke's genesis can be traced to a homeless man at a TCBY in North Little Rock.

Schmidt, who had been in Chino Horde, Thumbnail and a few other bands, was working there and wondering what to do with his life.

"While [Schmidt] was at work, this homeless guy would come in with some paper and a pencil," Thompson says. "The guy would write the numbers one through 27 over and over. Looking back, he was probably schizophrenic, but to Steve, at the time, it was a man trying to teach himself how to write and count. That influenced Steve to get off his a** and do something."

Schmidt eventually started a new band, hosted a radio show on KABF-FM, 88.3, in Little Rock and had an idea for a fanzine called Plaid.

He interviewed the influential and fiercely independent Washington-based Fugazi after a spring 1990 Little Rock show, and also had a chat with California band Plaid Retina when it came through town. Alas, Schmidt's 'zine didn't materialize.

"Plaid never got off the ground," says Thompson, who grew up in the Park Hill area of North Little Rock, "so the following summer, he and Jason White and I got together and put out the first issue of Fluke" which included those interviews as well as an interview with Lighten Up's Lamb, record reviews, photos and a story by Thompson called "When I Was A Kid" about Arkansas Travelers superfan Walter "Hook Slide" Bradshaw.

Fluke's first three issues were published by the three friends, but by the fourth issue in 1994, Thompson was on his own. (White had moved to California, where he would eventually join Green Day as a guitarist; Schmidt now works for the United States Postal Service in Portland, Ore.)

The original trio did get back together for 2011's 20th anniversary issue. White and Schmidt were interviewed, as were California folk duo Bobby Ebola and the Children Macnuggits.

With the exception of 2014, Thompson has published annually since 2009. He usually prints between 500 and 1,000 copies that he sells at flukefanzine.com and through independent bookstores and record stores, including Arkansas CD and Record Exchange in North Little Rock. Recent issues cost $4.

Taggart, who was on the cover of Issue 10, says, "It seems like, in the last 10 years, Matthew has really tried to dig in and connect the dots between that Towncraft phase and where these people are today, and how or if they're still contributing to things like that."

Last year's Lucky 13 issue was Fluke's 25th anniversary edition and, paired with Issue 14 from this year, acts as a sort of two-part celebration of the Little Rock scene, a trip down memory lane of old show fliers and interviews with, among others, Andy Conrad from the Numbskulz, drummer Colin Brooks, James Brady of Trusty and C̶o̶l̶l̶e̶t̶t̶e̶ Colette* Tucker, who papered countless central Arkansas telephone poles with fliers advertising punk shows.

Fluke isn't all stories about the old Little Rock scene, though. Issue 12 is 76 pages of comics by self-taught artist Bobby Madness, whose work Thompson first saw in 1990 on the cover of a Crimpshrine record, and then followed in the long-running New York-based 'zine Cometbus. Issue 11 features an interview and cover art by Russell Butler of Gurdon, the "rail moniker pioneer " also known as buZ blurr.

'Zines are still going strong and the movement is not some anachronistic pursuit. There are online 'zines, art 'zines, cycling 'zines, film 'zines, feminist 'zines, parenting 'zines, 'zines about 'zines -- Kanye West even has a 'zine for his fashion line.

And for 26 years, Thompson, who works in telecommunications and has two young children, has been making his own.

Looking ahead, he thinks Fluke could morph into something more literary. "If it does continue, I think it would be more toward writing and stories. I have a few story ideas I could do a full 'zine on," he says, becoming reflective. "I'm at a crossroads with it. I'm 45, I have a career, I'm a dad. I'm not going to shows as much and doing things a punk 'zine covers. But I do want to continue."

Crisp says of her friend, "You do anything for 26 years and it's going to become part of your identity. It's going to be part of who you are. I can't see him stopping."

Thompson says, "I still do it because I like to feel connected to other people. To me that's the greatest gift I've gotten from the 'zine, this connection with other like-minded people. I've connected with elderly people in the coffee shop while I'm cutting and pasting, or I correspond with someone through the 'zine that I've never met, but we've been corresponding for years. To me, those connections are the payoff. That's why I do it." 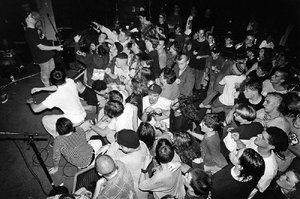 Photo by Special to the Democrat-Gazette/BARRIE LYNN BRYANT
The crowd at a November 1991 show by Little Rock punk band Trusty at Vino’s. This image is featured in Issue 14 of Fluke. 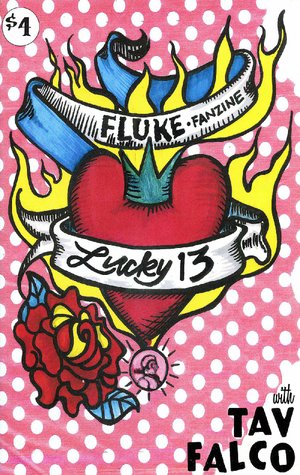 Lucky 13, the 25th anniversary edition of Fluke, has cover art by Mitchell Crisp. 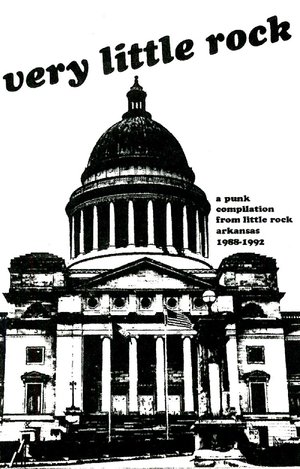 This is the cover of Very Little Rock: A Punk Compilation From Little Rock Arkansas 1988-1992.

*CORRECTION: Colette Tucker’s name was misspelled in a previous version of this story.