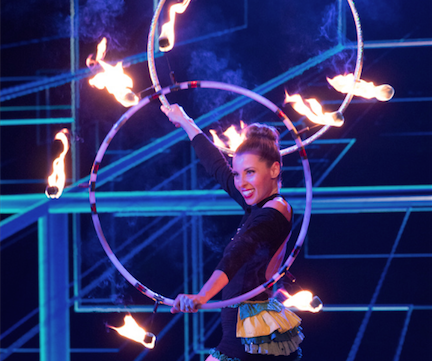 On Monday, a 31-year-old from Arkansas is bringing her hula hoops to screens across America as she competes for $2,000 and 17 cents on ABC’s revival of The Gong Show.

Katie “Sunshine” Wilson, who usually hula hoops in Conway, will perform an act she calls "Sunshine Hoops." The routine includes hoops of all varieties and culminates with Wilson spinning in a circle, on one foot, while balancing two flaming hula hoops.

The talent show in which Wilson competes is one with medium stakes. It originally aired on NBC in the 1970s and '80s and featured acts that ranged from mediocre to very bad.

Wilson's competition this Monday will include a pole-dancing dinosaur and a ventriloquist who performs holiday songs alongside a small band of stuffed animals.

Will Arnett, Jennifer Aniston and Jack Black will be sitting on the sidelines, prepared to judge each act.