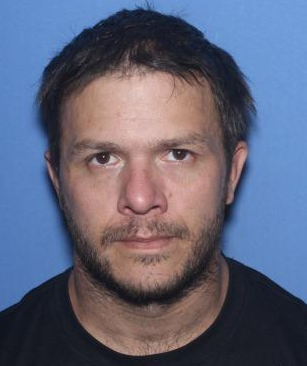 Brad Chambers is shown in the photo released by the Fort Smith Police Department.

FORT SMITH -- A Conway man wanted along with several others on charges of kidnapping and intimidating a witness in Pope County has evaded police who tried to stop him in a stolen van.

Fort Smith police spokesman Sgt. Daniel Grubbs said Brad Chambers, 34, dropped out of sight Wednesday afternoon after officers tried to stop a van displaying stolen tags. When the vehicle stopped, a white man wearing shorts and a red T-shirt fled from the van, which was stolen in Siloam Springs.

The release said police last saw the man running into woods between Arkansas 45 and U.S. 71 near the Planters Co. peanut plant in south Fort Smith.

Grubbs said Friday that no sightings of Chambers have been reported since he ran from police. Chambers reportedly had been staying at motels in the Fort Smith area, but police have not received any information about his movements in the area.

Law enforcement agencies surrounding Fort Smith have been notified that Chambers is wanted and at large, Grubbs said.

Chambers was charged with seven others last month with kidnapping and intimidation of a witness in a case against Kevin Long of Russellville, who is charged in Pope County Circuit Court with aggravated assault and being a felon in possession of a firearm.

Long, 22, was accused of firing shots at two men May 12 in Russellville. He is scheduled to go on trial on the charges in Russellville on Sept. 19, according to court records.

A probable cause affidavit by Russellville police officer David Bevis said the group of men and women kidnapped Heath Dollar, 28, of Atkins and Cascy Lewis, 31, of Dardanelle because they were going to be witnesses against Long in his criminal case.

The affidavit said the two were beaten and forced to sign letters of apology to Long before they were released. After Dollar signed his letter, the affidavit said, the men present lined up and were allowed to hit Dollar one more time.

Also charged were Adam Mitchell, 32, of Dover and Erin Hudson, 46, of Russellville, but there was no mention of them in Bevis' affidavit.

The online criminal file on Long's case did not list Dollar or Lewis as witnesses as of Friday.

The affidavit said Sandra Mallory reported on June 5 that her son, Dollar, was missing and had information that he was being held by Ferguson. Also on June 5, Dardanelle police stopped a car occupied by Ferguson and Dollar.

"Dollar had been beaten and had a gash on his head that was bleeding," Bevis' affidavit said. "Dollar reported that he had also been stabbed."

According to the affidavit, Mallory told police her son had been receiving threats from white supremacists for providing information about the case involving Long.

Long had been arrested in front of Dollar's home May 26, and Dollar reported to police May 30 that he had been getting threats from white supremacists, the affidavit said.

Prosecuting Attorney David Gibbons said Friday that Dollar and Lewis were abducted by "some group that runs together." As to whether they were white supremacists, Gibbons said it was too early to tell their "philosophical direction."

According to Bevis' affidavit, Dollar told police that he had gone to Shiloh Park in Russellville to meet Lewis on the night of June 4. When he pulled in, several people in vehicles surrounded his vehicle and began pounding on it with baseball bats.

They dragged him out of his car and began beating him, the affidavit said. He and Lewis were taken to a home where they were beaten by several people, including Ferguson and Amanda Rapp.

Rapp, 36, of Atkins, was charged with kidnapping and third-degree battery, a misdemeanor. Pope County sheriff's office records showed she was arrested July 23 and was being held in lieu of $25,000 bond.

The affidavit said Ferguson stabbed Dollar in the back of the leg and hit him in the head with a club.

"They were threatening to kill him because he was a witness in a case against Long," the affidavit said.

Lewis was held in a bedroom under guard, according to the affidavit. She was taken into the living room where three women -- Rapp, Shannon Spencer and April Howell -- took turns beating Lewis.

Spencer, 40, of Pottsville and Howell, 28, of Russellville are charged with kidnapping Lewis and third-degree battery. They were being held in the Pope County jail in lieu of $250,000 bond each and are scheduled to go on trial Feb. 5, according to court records.