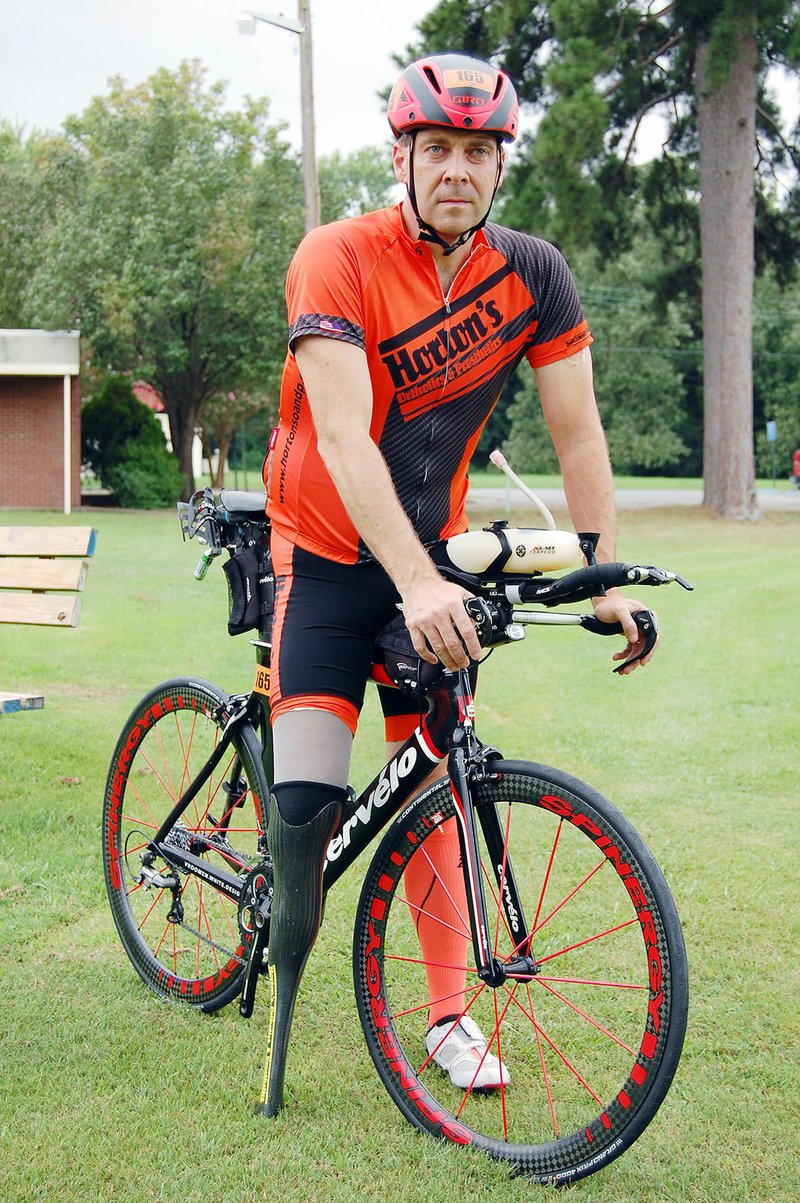 Chris Madison, a staff attorney for the city of Bryant, finished the Alaskaman Extreme Triathlon on July 15 — 10 days before the 32nd anniversary of when he lost his leg in a boating accident.

Chris Madison lost his leg in a boating accident on July 25, 1985. Ten days before his 32nd anniversary of the accident, Madison finished the inaugural Alaskaman Extreme Triathlon.

“The race started in Resurrection Bay; that was a powerful thing to me,” said Madison, a staff attorney for the city of Bryant. “I’ve come very far since losing my leg.

“I played sports growing up and stuff, but I never imagined doing something this challenging. If I had not lost my leg when I was 10 years old, I would not have done this race 32 years later.

“But because I had a resurrection of my ability to do sports stuff, a race like this is a milestone for me.”

“What’s funny is the cutoff that was advertised for the race was 18 hours and 30 minutes, so I knew it was going to be a tough day,” Madison said. “But I finished [within] the original advertised cutoff time, which is what my goal was.”

“Most Ironman distance races have a did-not-finish rate of 5 to 7 percent, so a 20 percent DNF is a legit deal,” Madison said.

Madison said he saw the triathlon posted on Facebook.

“[This is] the next level of challenging events.”

Two years ago, Madison helped one of his friends train for the Norseman Xtreme Triathlon, which he described as “the granddaddy of triathlons.”

“I was interested in doing something like that,” Madison said, “but there is a lot involved in the Norseman, and it is a challenging race as well. There are also 4,000 applicants and only 250 spots, so it is a lottery to get into it.

“The chance to get in is slimmer.”

Madison started the race at 4:30 a.m. and finished right before 11 p.m. He said the biggest hurdle, however, was climbing the mountain.

“There were 20 to 40 percent-grade [inclines] at places,” Madison said. “You would step 6 to 8 inches forward and go 6 to 8 inches high. At the north face, you had steps that were as tall as my knee.

“You have to muscle it up. Physically, that was the toughest part.”

Madison said having a good support team in his wife, Natalie, and his friend Adam Xaysuda was key to him finishing the race.

“My support was awesome,” Madison said. “I just shut my brain off, and [Adam] told me what to do on the mountain.

“It ties into one of my fundamental beliefs: If you have the right people around you, you can do anything.”

“I wouldn’t have made it that far if it had not been for him and my wife,” Madison said. “They were my support team. They fed me, clothed me, guided me and kept me in the game.

“They made it possible.”

Part of what makes the Alaskaman so challenging is the fact that it is a self-supported race, meaning every competitor has to bring his own stuff, such as water, food and supplies.

“In Ironman races, they have aid stations every 10 to 15 miles with 10 to 15 volunteers handing out water or Gatorade,” Madison said. “That’s the part that makes it extreme — it is on you to complete the race.

“That’s a layer of logistics and planning that you normally don’t have to worry about. Things like, ‘How often do I need my team to meet to refill my water bottles?’ and ‘How fast will I be drinking them?’

“If you don’t have a good plan, you can go for a long period of time without water. You have to plan for that sort of thing.”

Not to mention the wildlife that is present in Alaska.

“Two weeks before the race, there was a trail runner who got mauled and killed by a bear,” Madison said. “It wasn’t on the trail we were on, but it was on the eastern side of the same mountain.

“Bears were a legitimate concern.”

Madison said one of the funniest things that happened during the race with Xaysuda was his “concern” for bears.

“We are going along, and we’d be in the middle of a conversation, and he’d go, ‘Shoo, bear,’ and just started yelling it,” Madison said. “There were two women in front of us, and they’d be looking back, concerned there was a bear.

“So now, my wife and I will be sitting on the couch watching TV and just yell, ‘Shoo, bear.’ That is some of the goofy stuff that happens during the long day.”

Madison said he didn’t see any bears or moose during the race, but he said race officials, earlier in the day, said there was a mom and cubs near the trails.

“With all the noise and stuff, they went off,” he said. “I read reports of sea otters or something playing in the area we were swimming at, but I didn’t see them because I was busy swimming.”

Now Madison and three other amputees plan to compete in the Enduroman Arch to Arc Triathlon.

“We run 87 miles from London to the coast, swim the English Channel 21 miles, and then we bike from the coast into Paris for 180 miles,” Madison said.

Madison said the record for the physical challenge is held by a six-man team of former British soldiers.

“There has not been an all-amputee team to make the attempt or complete it,” Madison said.

Madison said the training for the race will be a lot different.

“This is go for an hour, don’t do anything for three hours, and then go for an hour,” Madison said. “You have shorter blocks, so it is real easy to burn yourself up.

“But after finishing this Alaskan [race], I am a lot more confident in my ability to complete this. Alaskaman was a stepping stone in doing Enduroman.

“My long-range plan is to do Enduroman by myself. But that will probably be in 2019.”