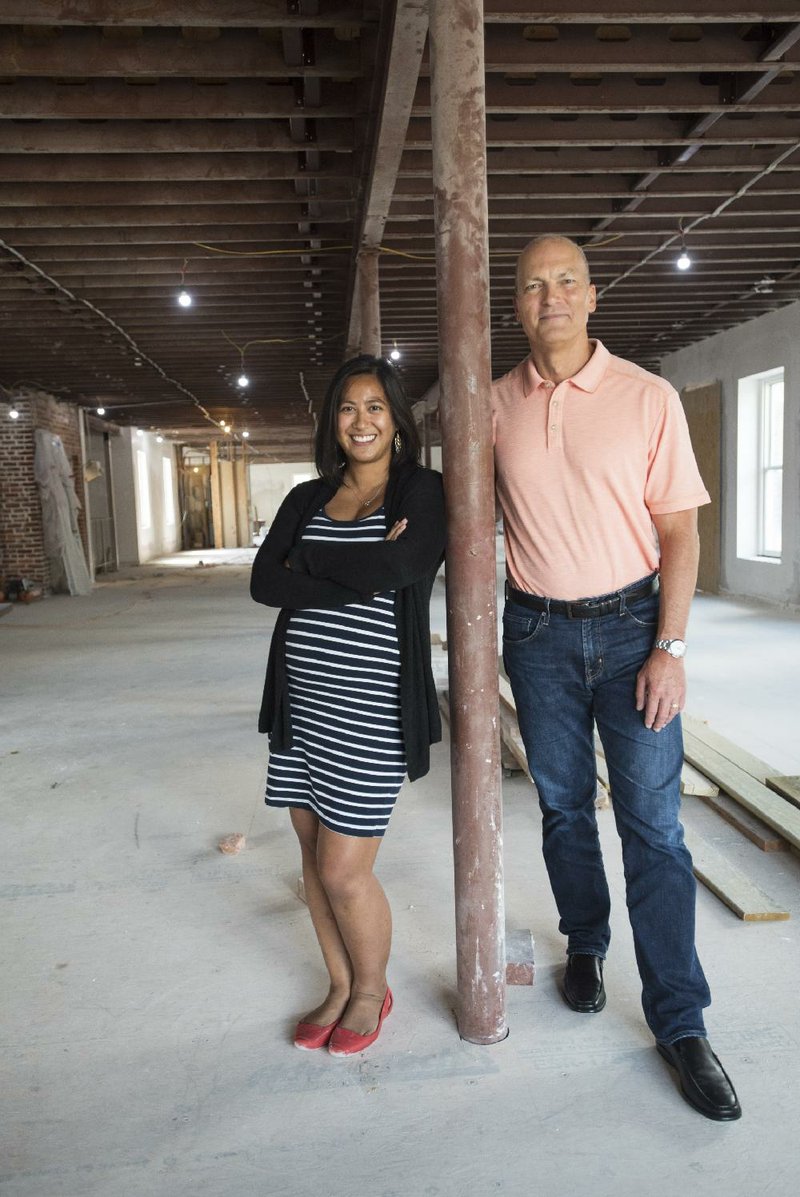 Jeannette Balleza Collins and Rick Webb, founders of Grit Studios, stand in their future offices on the second floor of the Massey Building in Bentonville. The pair are working with startup companies to grow their businesses.

Rick Webb, a retired Wal-Mart executive, and Jeannette Balleza Collins, former director of the ARK Challenge incubator and co-founder of Tonic Regional Funds, recently formed what they are calling a "business incubator."

Grit Studios is designed to nurture the startup ecosystem of Northwest Arkansas by supporting young companies as they build their businesses by connecting those companies to the region's traditional businesses like Wal-Mart.

"One of the problems is we are funding early startups ... and then we step back," Webb, Grit's director, said. "I want to put people around qualified startups and help them as they grow and address their problems."

"We need more $20 million to $50 million businesses in Northwest Arkansas that are in the technical [industries] where we can attract and keep talent," he said. For that to happen, he explained, young companies need longer-term help.

Additionally, he and Collins noticed that startups, investors and enterprise companies often do not understand each other's perspectives and needs.

For many of the early founders in Arkansas' startup community, Collins said, "it's been a hard road," because many investors haven't had "the necessary appetite and tolerance for the type of risky investments that are required for truly scalable tech companies."

Collins said Grit is looking to provide "transparency" and "rules of engagement" in those interactions.

"Grit is trying to acknowledge there is a gap and represent not only the startup but the investor and try to understand, 'How do you give the investor a secure portfolio?'" Webb said.

"How do you help that founder be better prepared to not only pitch their idea but make sure their idea succeeds and gets that return? ... "We're trying to sit in the middle right now," Webb added.

Grit will open a co-working space in the fall and ultimately will move to the historic Massey building on the Bentonville square in 2018.

Grit offers three memberships -- startups with about a minimum $1 million in projected annual sales; groups that could support startups in things like legal, marketing and accounting; and traditional enterprise businesses like Wal-Mart.

But they will not turn away serious entrepreneurs based on the revenue threshold, Webb said.

Collins said the goal is to attract "lifelong learners interested in building long-lived ventures and becoming active in a community of peers over the long haul."

By working with the business school, Collins hopes Grit can "assist in creating a dynamic learning environment that positions Northwest Arkansas to attract, develop and retain resourceful problem solvers who want to build companies right here."

Waller said the faculty will be able to teach classes for startup founders tailored to their needs at a given time, on topics such as accounting or personal finance. Walton College students will also gain exposure to local entrepreneurials through Grit, and startups may find future employees among them.

"Grit Studios does a few things -- targeting a level of startup that none of the existing [organizations] are targeting as much, and two, maybe more importantly, they are not just providing funding or consulting," Waller said. "They are providing physical space for businesses to share ideas and resources."

Michael Scheuer, founder, president and CEO of wrkr solutions, a San Francisco startup that provides workforce optimization software and services, said he decided to join Grit because his team views it "as a unique resource that offers access to a knowledge base that is challenging to find in the Silicon Valley."

Of Northwest Arkansas' three Fortune 500 companies, he said, "there's no doubt that the entrepreneurial DNA from the founders of those companies has permeated the broader community."

"We're happy to get in there, roll our sleeves up and work with entrepreneurs to get to know them," Puchir said. "As an added benefit, as we start to get to know these companies, there's always the potential for us to make an offer to acquire them."

Webb said that in his early professional days, he had an older, knowledgeable partner who saved him from many mistakes.

"We ended up in a place faster than I certainly would have ended up by myself," Webb said. "How do you give that same partner to a startup founder who needs it? That's what we're trying to do."

Webb said for startups to succeed, they need mentoring beyond a short-term accelerator, and it's important for them to be exposed to older, established companies in their industries.

Wal-Mart has already joined Grit and the incubator is in talks with six other established businesses, Webb said.

"We're trying to provide ongoing support for qualified startups, so that ultimately we can look around in five to 10 years and see big businesses that have grown up here and diversified the market," said Webb.

*CORRECTION: Ecoark CEO Jay Puchir’s name was misspelled in a previous version of this story.