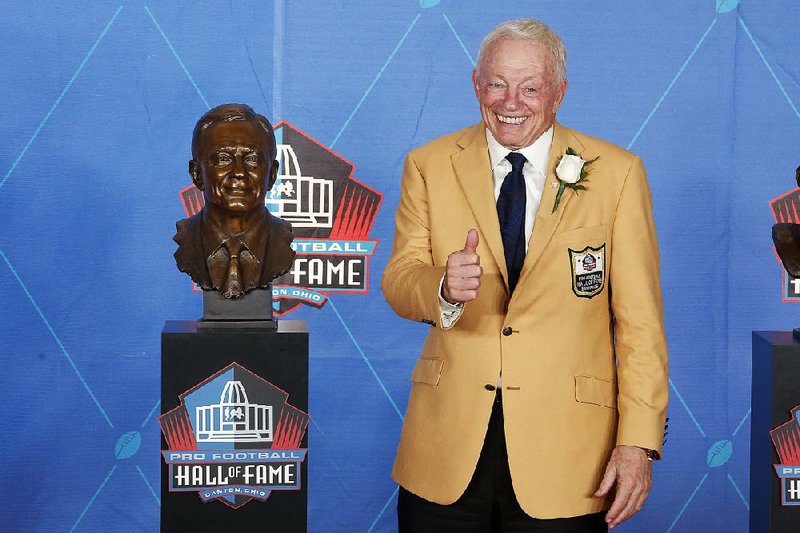 Dallas Cowboys owner Jerry Jones poses with a bust of him during inductions at the Pro Football Hall of Fame on Saturday, Aug. 5, 2017, in Canton, Ohio.

Dallas Cowboys owner Jerry Jones is getting recognition from the North Little Rock City Council for his recent induction into the Pro Football Hall of Fame.

A resolution expected to fly through the City Council “with a great deal of pride” today, according to the legislation, will formally congratulate Jones for his induction into the Hall of Fame at Canton, Ohio, on Aug. 5.

The resolution says Jones, who grew up in North Little Rock and graduated from North Little Rock High School, has been a “long-time friend and benefactor” to the city. Specifically, it mentions his “support of outreach programs for local children, including the highly successful Police Athletic League.”

The resolution will also retroactively designate Aug. 3 as Jerry Jones Day in the city.

The legislation may double as an apology of sorts from the city.

Jones’ support of North Little Rock Police Department officers, mainly for their work with the volunteer Police Athletic League, included inviting officers and their families to go to a Cowboys game last fall with all expenses paid. The offer resulted in an ethics complaint against Jones and the city.

The state Ethics Commission, in a 3-2 vote in May, found Jones had committed “an unintentional violation” for his gift and issued him a warning letter. The basis for the violation, according to the commission, was an “erroneous conclusion” in an Oct. 24 resolution by the City Council that accepted the gifts and subsequently passed them along to the officers as an employee benefit.

A donation of $25 will allow dogs held at the North Little Rock Animal Shelter to receive a day of “pampering” Friday through a fundraiser by the shelter’s Friends of Animals support group.

The money made during the fundraiser will go toward the shelter’s spay and neuter program.

Each $25 gift will sponsor a shelter dog that will receive a special bath, massage, a treat and a fresh bandanna. As of last week, 39 dogs were in need of sponsors.

Sponsorships will be taken through Thursday evening. If there are more sponsors than dogs, the next incoming dogs to the shelter will receive the treatment until all sponsorships have been used, according to the Friends of Animals group.

North Little Rock will receive a Federal Emergency Management Agency grant of $363,637 for the city’s Fire Department to purchase a rescue vehicle, according to a resolution to be considered by the City Council today.

The city’s match for the grant is $36,363, an appropriation the City Council would approve through the legislation.

The vehicle will be a replacement heavy rescue truck that will include no less than a 30 kilowatt-hours generator and 360-degree scene lighting. Current operational rescue trucks average 21 years in age, according to supporting documents to the resolution.

The city’s share of funds, the resolution states, is available from Act 833 funds through the Arkansas Department of Emergency Management. Those funds are used for training, firefighting equipment and capital construction or improvements of fire departments.