State police: Driver of truck that spilled frozen pizzas across I-30 cited; 2 hurt in crash 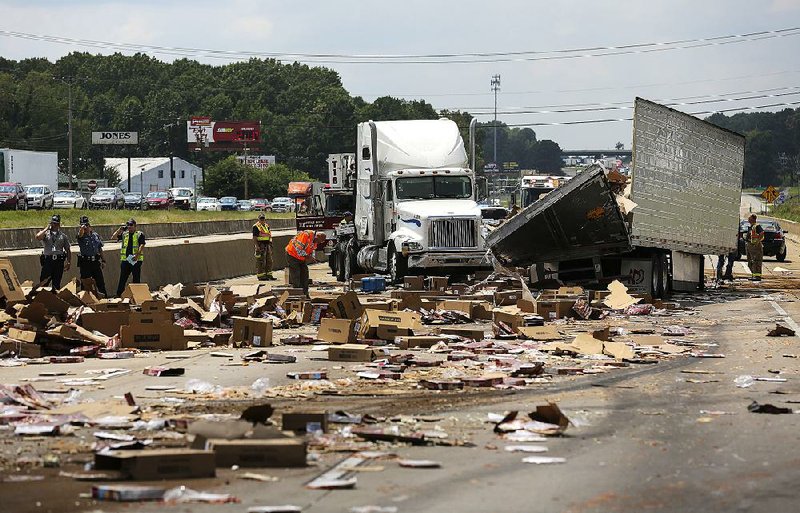 Arkansas state troopers investigate after a westbound truck hauling frozen pizzas hit the Mabelvale overpass on Interstate 30 on Aug. 9, 2017, causing the interstate to be shut down. No injuries were reported from the wreck.

The driver of a rig that splattered frozen pizzas across Interstate 30 and backlogged traffic for hours Wednesday was issued a citation in the wreck, according to Arkansas State Police.

The crash happened around 1 p.m. about 1 mile east of Interstate 430.

According to a summary, 58-year-old Darrell Crummer of Cameron, Texas, was driving an International Navistar tractor-trailer westbound in the middle lane when he tried to switch into the right lane, state police spokeswoman Liz Chapman said in an email.

The front of the tractor-trailer reportedly collided with the side of a Dodge Charger driven by a Katherine White, a 56-year-old Little Rock woman. Crummer then veered to the right, and the 18-wheeler jackknifed before crashing into the Mabelvale Pike overpass bridge support, police said.

Upon impact, the trailer detached from the truck, and both slid westbound and came to a stop facing the opposite direction, Chapman said. The trailer's cargo, frozen pizzas, spilled across the roadway.

When Crummer hit the bridge support, debris from his trailer was thrown across the highway and shattered the windshield of an eastbound Ryder Truck Rental freightliner, according to state police.

Chapman said Crummer was reportedly unhurt and cited for an improper lane change.